Aero Vodochody appears to have rebranded a new version of the L-159 advanced jet trainer as the F/A-259 Striker as it makes a late bid for the US Air Force's OA-X close air support programme.

A model on the Czech company's stand includes an aircraft carrying the new designation, alongside a scale-replica of its other trainer aircraft, the lighter L-39NG.

In June, Aero Vodochody and its new partner Israel Aerospace Industries announced they were co-operating to pitch for OA-X with an advanced variant of the L-159, which they say could be ready for delivery from 2020.

The two companies have said that – if chosen for the roughly 350-aircraft requirement – they would consider setting up a production line and supply chain for the Honeywell F124-GA-100-powered jet trainer in the USA. 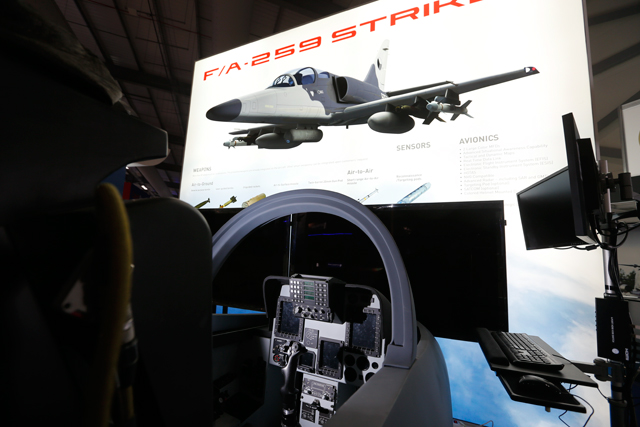 Although OA-X funding has not yet been agreed, the Czech airframer’s chief executive Giuseppe Giordo expects the Pentagon to open a formal competition “soon”, and says the “combat-proven” L-159 would be “the most cost-effective and lowest-risk option”.

The USAF has already invited Textron Aviation and Sierra Nevada/Embraer to take part in an evaluation exercise this summer with their Beechcraft AT-6 and A-29 Super Tucano, respectively.

However, Giordo says the USAF “cannot afford the risk of flying with turboprops”, adding: “We do believe that US pilots need to have the best assets in close air support missions. This is not a developmental airplane. It has been used in a real operational war environment and can perform many roles.”

Aero Vodochody and IAI’s Lahav division announced in April that they are to collaborate on a version of the L-159 that would equip the jet trainer with a new, “fourth-generation” avionics suite and “other solutions”, believed to be weapons integration systems. The current variant already features IAI equipment, including an Elta Systems radar and optional datalink.

The company restarted low-volume production of the L-159 in 2016 after cancelling the programme in the mid-2000s when sole customer the Czech Republic furloughed most of its fleet of 72 aircraft. However, after a successful decade-long effort to sell the surplus types to the Iraqi air force – which has used them in its campaign against so-called Islamic State insurgents – and US adversary training specialist Draken International, Aero Vodochody has built two additional aircraft.

Giordo says two L-159 production lines could be established – one building the latest version for the transatlantic requirement with IAI and a possible US partner, and the existing facility near Prague focusing on the existing variant.

The partnership with IAI could also potentially include the smaller L-39NG: a re-engined version of its venerable Albatros jet trainer that Aero Vodochody hopes to fly by November and have operational by the first quarter of 2020.