UK investigators have disclosed that a third EasyJet take-off incident at Lisbon last year, under near-identical circumstances as the previous two, resulted in the Airbus A320 lifting off just 110m from the runway end.

The incident, relating to performance calculation confusion, occurred on 16 September last year, shortly before a change of taxiway designation which had been planned after two similar incidents in quick succession – also involving EasyJet A320s – in April and May.

Both aircraft in the earlier events had become airborne some 350-400m from the end of runway 21.

But the UK Air Accidents Investigation Branch states that the September event resulted in an even tighter margin.

The incident centred, again, on the crew’s believing they had calculated performance data for an intersection departure, whereas confusion over taxiway and take-off position designations meant the calculation actually applied to a full-length runway.

As a result, during the take-off roll from the U5 intersection, the crew used a lower thrust setting than required.

The carrier’s procedures for cross-checking distances shown in the electronic flightbag against those on the ground charts “did not capture the error”, says the inquiry.

Take-off distance available from the U5 intersection was 1,395m less than that used for the performance calculation. 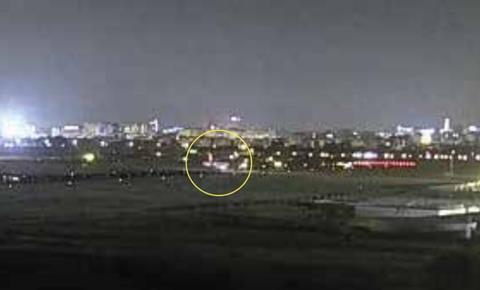 Full take-off thrust was not selected at any point in the departure.

Analysis of the dynamics of the event showed that, if the A320 had been required to abort take-off near V1, it could have overrun the runway by 585m.

“This could have caused significant damage to the aircraft and its occupants,” the inquiry says.

It points out that, during completion of the initial performance calculation, the crew had been interrupted “numerous” times – notification of a sick passenger, amended fuel requirements, and changes to loading among the distractions – despite mitigations the carrier had in place.

Neither pilot recognised that the A320 was not performing as intended until late into the take-off run.

“This would match with previous investigations…which have shown that humans are not physiologically adapted to identify different acceleration rates, and often do not realise something is wrong until the end of the runway comes into view,” the inquiry says.

In all three incidents at Lisbon the crews were confused by electronic flightbag intersection selections because they did not use the actual taxiway names. Portuguese authorities have since completed work to redesignate the taxiways.

As part of preventative measures EasyJet has introduced a new Airbus performance software, known as ‘FlySmart L6’ which includes a pictorial image of take-off points used in calculations, and greater clarity has been included for departure positions for Lisbon’s runway 21.

Although French investigation authority BEA had initially identified the airframe involved in the 16 September incident as MSN6353 (G-EZWZ), the inquiry says the jet was G-EZWE.