Indian regional carrier Trujet is hoping to finalise talks in the coming days over a $25 million investment aimed at enabling it to restore flights.

Cirium fleets data shows Trujet has a fleet of seven ATR 72s, only one of which has been in service, and the carrier appears to have grounded flights. 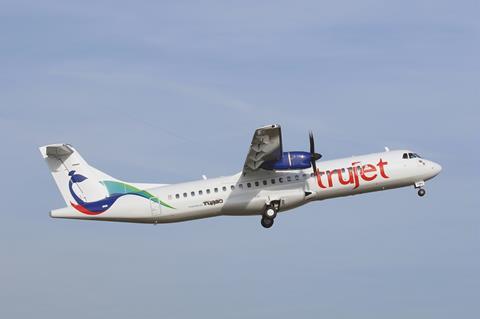 Without specifically stating all flights are suspended, the airline’s managing director V Umesh on 16 February issued a statement saying its operations are “temporarily hampered because of various administrative and technical reasons”, adding ”Trujet will resume its operations at a [sic] short notice”.

Umesh says: ”Trujet is in final stage of discussion with a potential investor who is funding $25 million within the next few days.”

He says the investor plans to bring in his own management and that a new chief financial officer has been appointed with effect from 14 February.

“The investor is also in the process of finalising a new chief executive who is well-versed and experienced in aviation,” Umesh adds, noting that appointment would take charge from the start of March. Until then Umesh will serve as acting chief executive.

Trujet launched operations in the summer of 2015.