The first six months of 2017 smashed all records for safe airline performance worldwide, but so far this year aircraft safety looks to have deteriorated.

This appearance of dramatic change is misleading, however. The number of deaths resulting from commercial air transport accidents to the end of June this year was 323, compared with just 16 in January-June 2017. But the number of fatal accidents only increased from six to eight – these totals are the two lowest in modern air transport history – and the number of individual fatalities for the first six months of the year was only 75% of the average for the last decade.

Bearing in mind that statistics for such a short period should be taken with a large pinch of salt, it nevertheless remains true that all the safety indicators are still pointing in the right direction.

The danger of an apparently stable period of excellent safety performance is that some airlines might feel it justified in packing up their safety management systems. Fatal accidents, however, are not the only indicator of threats to safety. The number of serious incidents in the last few years is evidence of continuing risk and many of them entail simple human mistakes: a crew failure to order de-icing before take-off in a Canadian winter (West Wind Aviation ATR 42-300, Fond-du-Lac, last year); failure to select pitot heating during a Russian winter (Saratov Airlines Antonov An-148 in February this year); and a chaotic crew response to a simple situation (Western Air Saab 340, Grand Bahama in 2017).

Although it was the least serious among the fatal airline accidents this year in casualty terms, the 17 April Southwest Airlines Boeing 737-700 uncontained engine failure and sudden decompression is perhaps the event from which most lessons can be learned. This was the first fatal accident to a US jet airliner in nearly 12 years, although the USA did have a serious turboprop fatal accident involving a Bombardier Dash 8 Q400 of Colgan Air nine years ago – but this is still a long time between incidents. 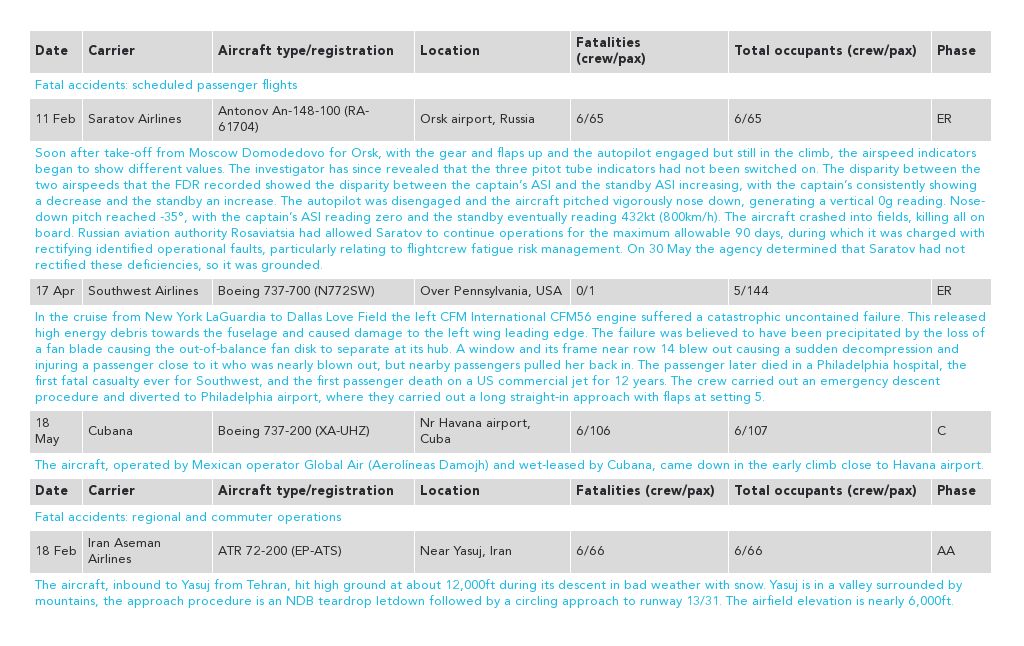 The Southwest 737 engine failure also caused the first-ever fatality to occur on that carrier’s services in the 51 years since its foundation in 1967. The exemplary safety record in the US commercial air transport industry – although to be fair the USA is not alone among mature Western economies in this respect – offers a target other countries could imitate if they applied similar disciplines in training and management. The litany of nations in the fatal accidents list so far this year includes Cuba, Iran, Kenya, Nepal and Russia. Meanwhile. US commercial aviation provides proof that near-zero accident rates can be achieved, a prediction made in these pages recently by FlightGlobal Ascend’s director of air safety Paul Hayes.

Exactly what caused the Southwest fan blade failure will be determined by investigators in due course, but lessons from the crew’s handling of the emergency were positive. The out-of-balance No. 1 engine fan detached completely from its hub, releasing high-energy engine debris that damaged the left-wing leading edge slats and also impacted an overwing cabin window frame so badly it blew out, resulting in the death of the passenger seated nearest to it and causing rapid decompression.

The flightcrew went onto oxygen and carried out an emergency descent, calling for vectors to the nearest airport, which was Philadelphia. The captain, a former US Navy Northrop Grumman EA-6B Prowler and Boeing F/A-18 Hornet pilot, Tammie Jo Schults, led the crew through an exemplary set of drills to a safe landing at high speed – 165kt (305km/h) – to reduce the risk of control problems resulting from asymmetric wing damage. 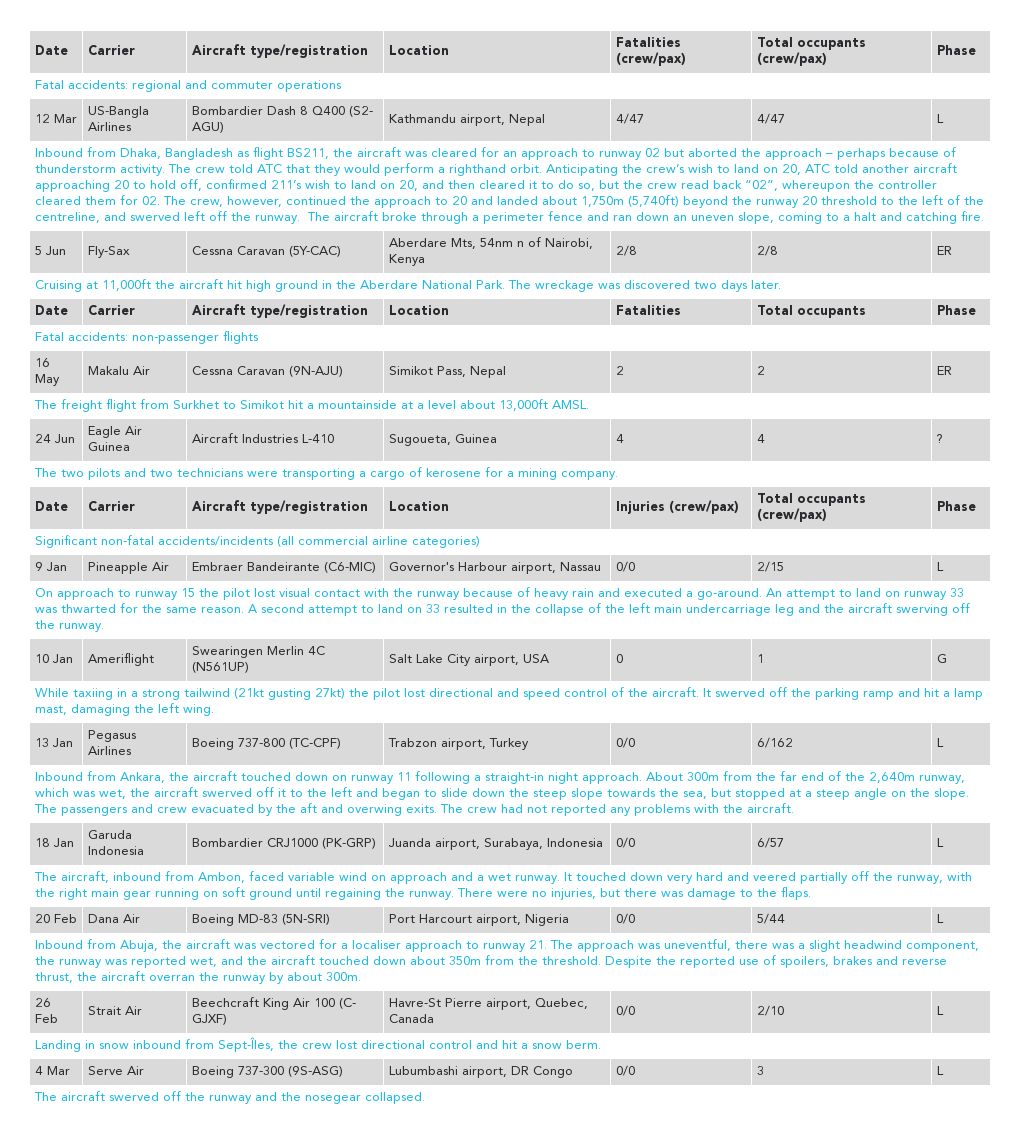 The Southwest uncontained engine failure is one of many such incidents over the last few years. Although they remain statistically rare, given how many flights occur globally each year, uncontained engine failures happen. And the risk that they will continue to occur from time to time is evident, whether the engine is a CFM International CFM56 series (Southwest, this year), a GE Aviation GE90 (British Airways 777, Las Vegas, 2017), a Pratt & Whitney PW127 (Jet Airways ATR 72, Bangalore, June 2016), a Rolls-Royce Trent 1000 (Scoot 787, Sydney-Singapore, 2016) or a GE CF6-80 (American Airlines 767, Chicago O’Hare, 2016).

Fortunately, none of these recent damaging events has led to aircraft losses. But, despite hugely improved powerplant reliability, the industry has not yet entered an era of failure-proof engines, so crews will still – occasionally – have to be ready to deal with such events.

The other fatal events in the first six months of 2018 are mostly types of accident that used to be more common but have been dealt with in much of the world by improving crew resource management skills, training and discipline plus technology. The only event that is difficult to assess at this point is the Cubana 737-200 that went completely out of control almost immediately after take-off from Havana. The aircraft was very old, and US sanctions do not make parts supply and maintenance straightforward for Cubana, but whether that factor will turn out to have a bearing is impossible to say at this stage.

Meanwhile, from interim reports released or leaked by investigators, it is known that the Saratov An-148 twinjet suffered from loss of control soon after take-off when the pilots’ airspeed indicators were clearly providing incorrect information. The reason, says the investigator, is probably that the pitot heaters had not been switched on.

There have been three fatal controlled flight into terrain accidents, a category that has become rare since the introduction of terrain awareness warning systems (TAWS). An Iran Aseman ATR 72 was carrying out a non-precision let-down in mountainous terrain and bad weather, but it should have had a working TAWS to make that safer. A Makalu Air Cessna Caravan freighter en route among the Nepal Himalayas and a passenger Caravan that hit high ground in Kenya were not required to have TAWS.

An issue that airlines would do well to examine is the number of very expensive ground collisions that are occurring. A visit to YouTube yields so many embarrassing incidents in which wingtips clip tail fins, other wingtips or fuselages, usually during taxiing but sometimes when aircraft are being towed, that this summary has not included them all in the listings. Increasingly crowded airports and rising numbers of aircraft with impressive wingspans are clearly pushing up the risk, but it should not be beyond the wit of mankind to get this problem under control. 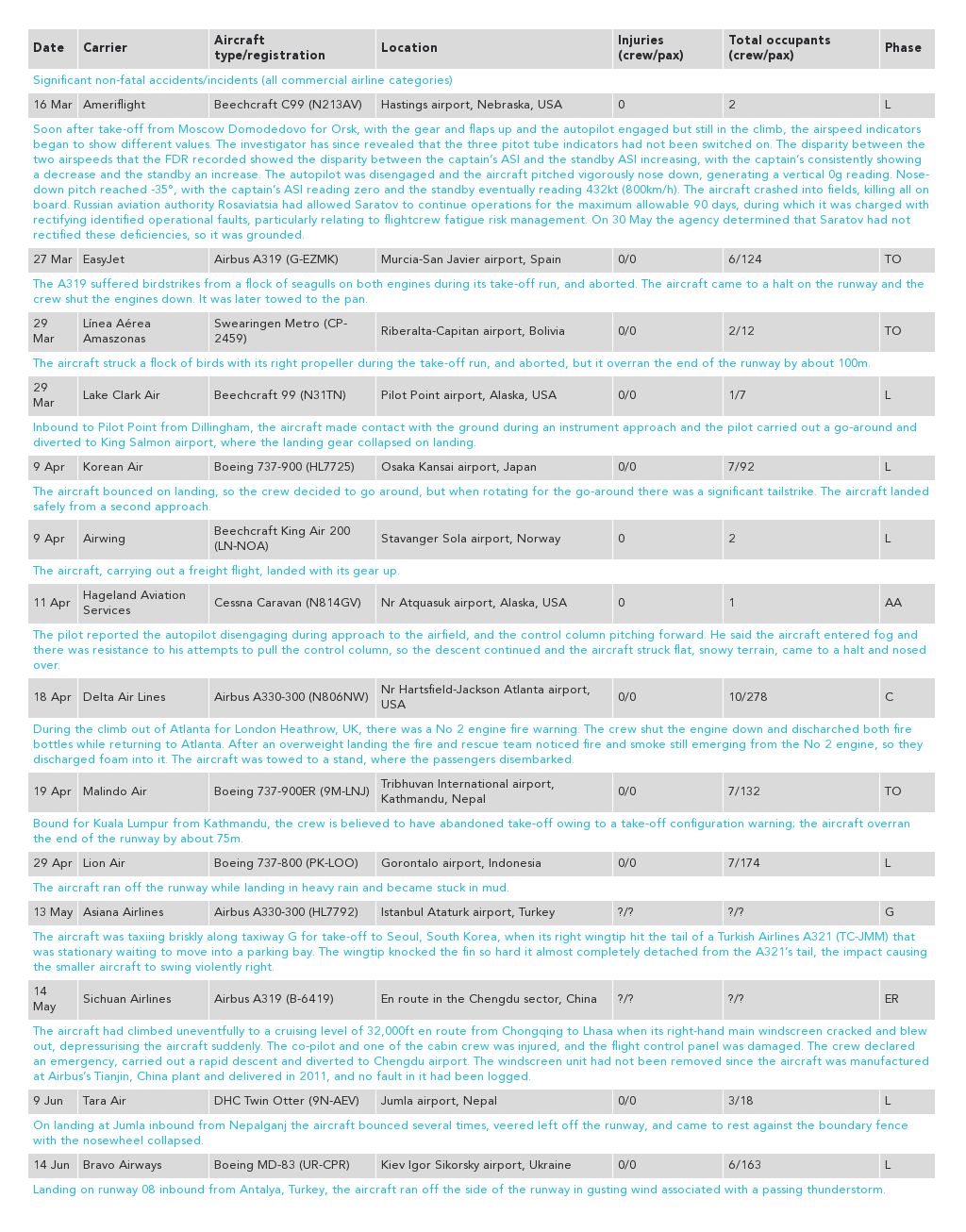 It is becoming increasingly acknowledged in the industry that, when things go wrong in aircraft, the capacity of the pilots to deal competently and calmly with the additional workload caused by a failure or unexpected development is related to a combination of the crew’s knowledge, skill and character. While the first two of those components might be considered obvious, the third – personality – has often been ignored, except by the military, which has to choose recruits for their resilience under fire. Now civil agencies, such as the European Aviation Safety Agency, are beginning to take more account of this aspect of flightcrew selection in drawing up future training guidelines and policy.

In June EASA hosted a seminar on KSA – knowledge, skills and attitude. EASA has launched Area 100 KSA, a programme to “encourage the development of the thinking pilot through scenario-based exercises and assessments”. The agency explains: “Area 100 KSA will be taught and examined by approved training organisations and will crucially be focused on the competencies a professional licence-holder must possess.”

EASA has also published its latestEuropean Plan for Aviation Safety, which sets out a number ofkey actionsfor training and operations. For training, EASA starts with citing the ongoing need for action to introduce evidence- and competency-based training programmes for all licences and ratings; also to review learning objectives and syllabi for commercial pilot licences, to ensure they are relevant to the increasingly computer-dominated aviation environment; to improve the fidelity of flight simulators, especially at the edges of the flight envelope; and to support national aviation authorities (NAA) with the training and expertise to attract suitably qualified staff.

The agency re-iterates its concern about the risk of loss of control in flight (LOC-I), particularly during go-around or early-climb phases. It also notes, not for the first time, that runway excursions – particularly on landing – continue to be proportionately the biggest single category of accidents. Although runway excursions are frequently non-fatal – even if very damaging – EASA says they accounted for 13% of passenger and cargo fatal commercial air transport accidents in the last decade. For that reason, it is considering requiring onboard technologies that can reduce this risk.

Meanwhile, EASA urges NAA to study the exposure of their registered carriers to LOC-I and runway excursions, and take appropriate action locally. A US-Bangla Airlines Q400 fatal accident in March involved the loss of 51 passengers and crew in a runway excursion accident at Kathmandu airport, Nepal. This year’s fatal and non-fatal accident listings certainly bear out the urgency of EASA’s concern.