Honda’s achievements in Formula 1 motor-racing are legendary – and the company’s not been too shabby in the aerospace sector, either. Given that there are so many technical disciplines shared between the two, it should be no surprise that the company’s divisions have collaborated to drive themselves forwards.

Honda’s achievements in Formula 1 motor-racing are legendary – and the company’s not been too shabby in the aerospace sector, either. Given that there are so many technical disciplines shared between the two, it should be no surprise that the company’s divisions have collaborated to drive themselves forwards.

This collaboration has been delivering success on the Formula 1 race tracks in 2019 with Red Bull Racing (RBR) powered by Honda’s latest RA619H V6 turbo hybrid F1 power unit (PU). The 2019 RB15 Formula car, driven by Dutch hotshot Max Verstappen (below), has already taken three Grand Prix victories with Honda power. This is in no small part thanks to the input provided by Honda’s aero-engine team, who developed the HF120 turbofan that powers the pioneering HA-420 HondaJet business-aircraft family. 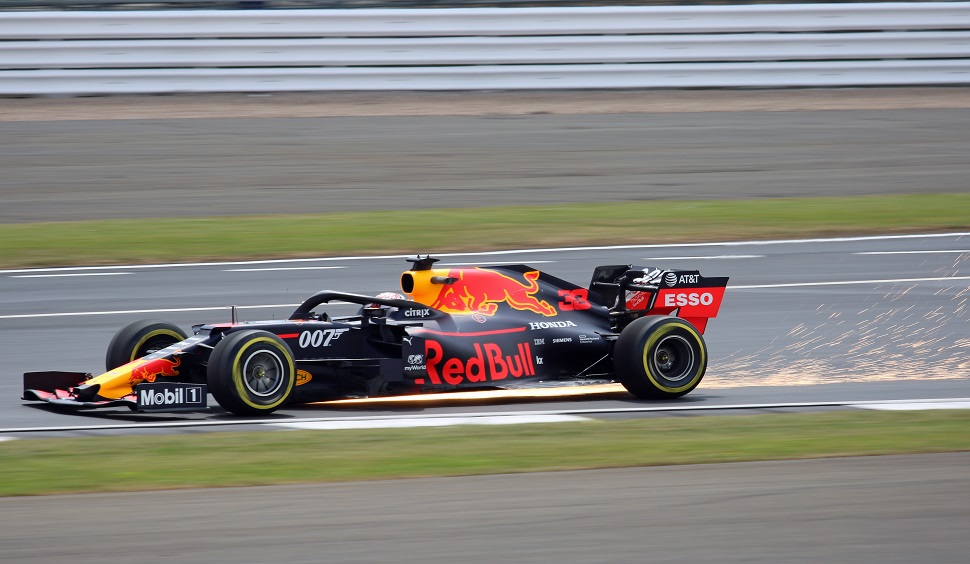 Honda re-entered Formula 1 in 2015 as an engine partner with McLaren. During their three seasons together, success evaded the partnership despite having multiple World Champion Fernando Alonso (pictured below) at the wheel. In fact, the most memorable moment during the McLaren era was probably one that Honda would rather forget. Alonso – frustrated at the lack of power during the Japanese Grand Prix – was brutal in his assessment of Honda, describing the unit as “a GP2 engine…very embarrassing” over the radio to the pits. This was a damning remark made on Honda’s home turf, effectively labelling the Japanese package as being fit only for lower racing formulas. 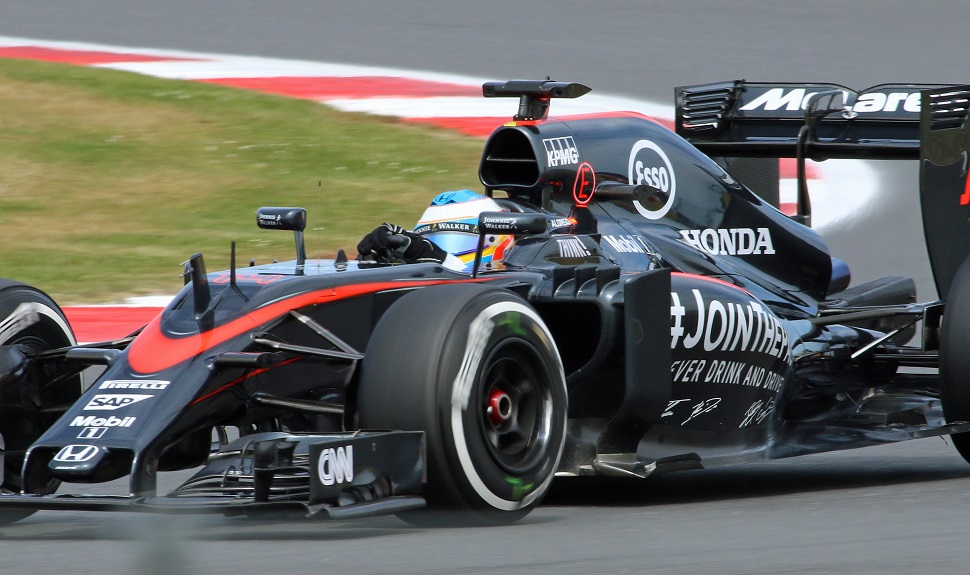 Alonso, driving a Honda-powered McLaren, was openly critical of the F1 engine’s performance

After a very public divorce between McLaren and Honda, the former linked up with Renault while the latter joined forces with Scuderia Toro Rosso (STR) for the 2018 season. Honda’s move to the Red Bull Racing sister company was viewed as a look-see at the Japanese manufacturer by the multi-championship winning team based in Milton Keynes, UK. The team obviously liked what they saw, as Red Bull Racing joined STR with Honda power for the 2019 season – and won three races during the season. McLaren, meanwhile, remains winless with Renault power.

The extraordinary turnaround in the Honda Formula 1 engine’s power, performance and reliability that has propelled Red Bull to two Grand Prix victories this year was helped in no small part by The Honda Company’s drive to search wide and dig deep within its organisation to find technical solutions. And that’s where technology from the HondaJet – specifically its GE Honda HF120 powerplant – enters the story. 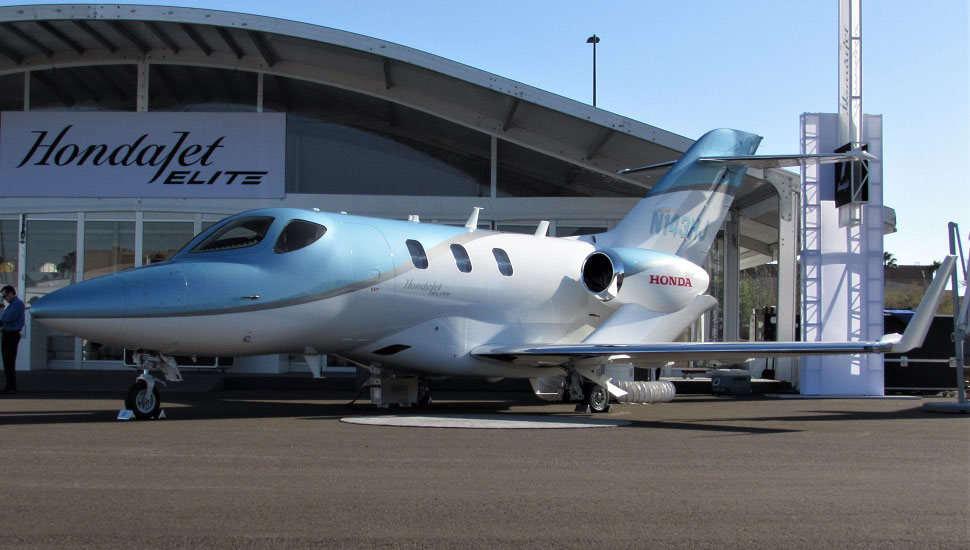 The HondaJet is a regular attendee at NBAA conventions

“When Honda returned to F1 in 2015 with McLaren, the team struggled, with performance not meeting expectations,” says Yoshihiko Wajima, who heads up Honda’s Aero Engine Center based in Wako, Saitama, Japan. “It was obvious we had to improve the reliability and power output of our Formula 1 power unit.”

Development of Honda’s Formula 1 engine is undertaken by Honda Research & Development (HRD) Sakura, which is the Tochigi, Japan-based racing arm of Honda R&D responsible for research, development and manufacturing of racing engines and cars.

As Honda looked for answers to tackle the early problems with its Formula 1 engines, Noriyuki Matsumoto, then the President of Honda R&D and the Honda executive in charge of the Formula 1 operation, set out his plans to the R&D members at HRD-Sakura. 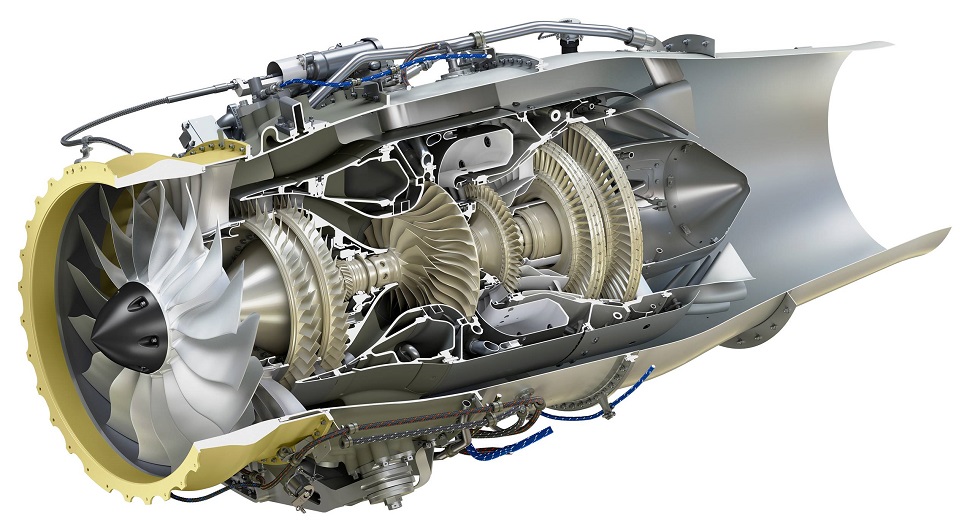 “Honda has extensive resources and knowledge throughout all of our R&D functions,” Matsumoto told them. “HRD-Sakura should ask them to join in the Formula 1 development effort so that we can gather the best hands and wisdom from all Honda R&D and apply it to Formula 1.”

A steering committee was set up, chaired by the head of HRD-Sakura, together with executives from other areas of Honda R&D. This was intended to accelerate development of the Formula 1 engine by combining knowledge from different R&D areas across automobile, motorcycle, and power-products businesses – as well as aviation, says Wajima, who was one of the committee members.

“Among the key discussion points was the turbocharger and MGU-H, which seemed to be key to improving the reliability and performance of the whole power unit,” Wajima says.

A turbocharger enhances the combustion process and efficiency by compressing the intake air into the internal combustion engine, he explains. “Turbofan engines for aircraft have a lot in common with turbochargers. Although their overall structures are different, both spin a set of blades around an axis at very high RPM and are subject to sophisticated aerodynamic engineering.”

Wajima was convinced that Honda’s aviation engine expertise could provide an important contribution to improving the Formula 1 power unit, and formed a special development team at the Honda Aero Engine R&D centre in Wako.

He assigned Etsuo Noda, the senior chief engineer who led development of the HF120 turbofan engine (below) in collaboration with GE Aviation. The 2,100lb thrust (9.5kN) HF120, which evolved from the Honda-developed HF118 turbofan, is the result of a joint venture established in 2004 between Honda and GE that combined the R&D and jet engine production and design expertise of the two companies. 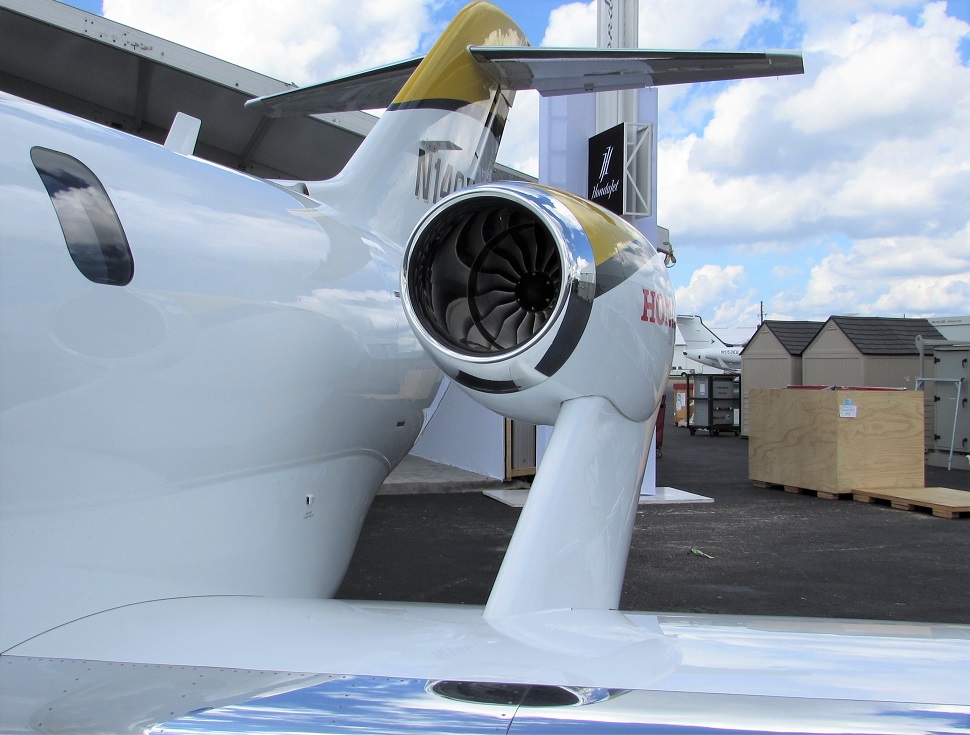 Noda’s team first worked around the axial reliability improvement, says Wajima. In 2017, Honda drastically changed the layout of the compressor and the turbine of the turbocharger to enhance the efficiency of the Formula 1 power unit.

“As a result, the length of the axis to connect the compressor and turbine was extended, which created vibration resonance issues on the axis rotating at high RPM. The mission was to find out the cause, establish a countermeasure and build an improved part for testing,” Wajima says.

“Extensive analysis was carried out on axis vibration and bearing temperature data to specify the root cause,” he adds. “Then, to solve the issue, an aeronautical engineering design method was applied to stabilise the axial vibration resonance.”

From 2018, Honda’s aero-engine experience was leveraged to further develop performance improvements in the Formula 1 power unit’s turbocharger. This manifested itself with the introduction of the “Spec 3” version of Honda’s 2019 RA619H power unit at the French Grand Prix in June this year. Almost immediately, the Honda-powered RBR RB15 Formula 1 racer was winning in the hands of Verstappen.

“We are proud that the aero-engine R&D centre has made a great contribution to the overall competitiveness of the Honda F1 power unit by applying our aeronautical engineering knowhow to the axial design and optimising the aerodynamics of the whole turbocharger to improve the reliability and performance of the turbo and MGU-H,” says Wajima. “Needless to say, the total Formula 1 power-unit competitiveness improvement is the result of the collective engineering efforts and skills of all Honda R&D divisions led by HRD-Sakura.”

The story doesn’t end there, says Wajima, as this “all-Honda collaborative process” continues to further enhance the company’s Formula 1 performance and reliability.

So when perusing the business end of a HondaJet in the static park at Las Vegas, spare a thought for the engineering design that went into those HF120 turbofans and subsequently helped deliver Grand Prix success for Aston Martin Red Bull Racing during the 2019 Grand Prix season… and beyond. 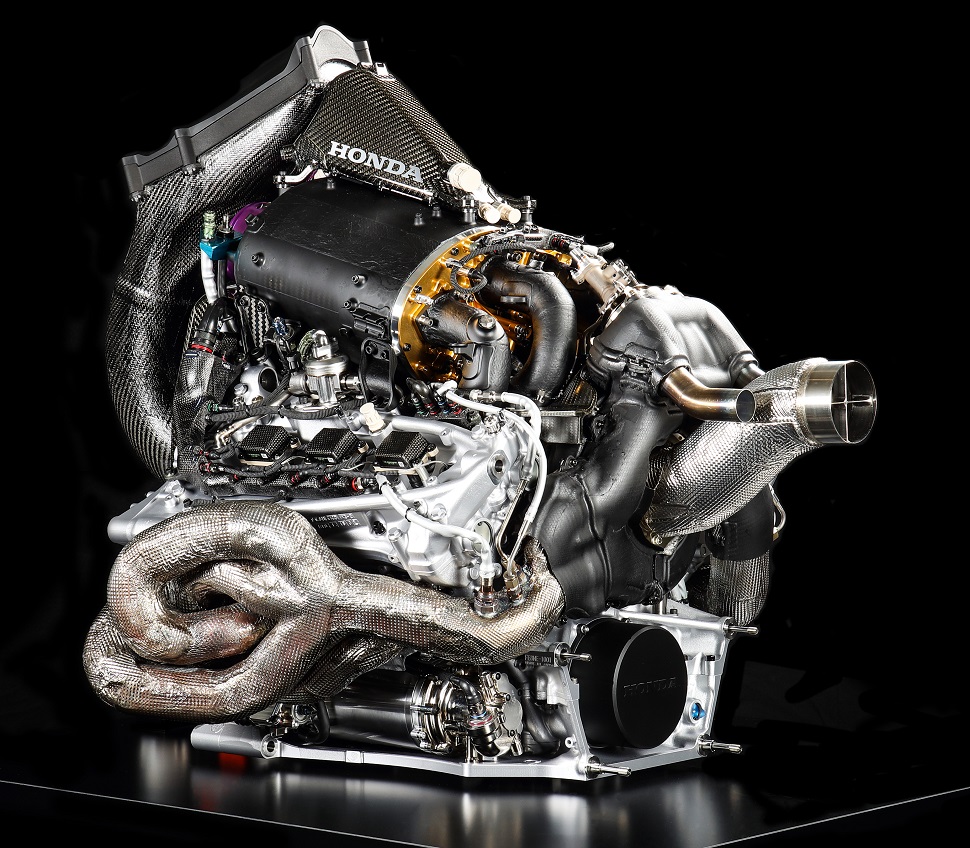 Spinning at roughly 100,000rpm, the hybrid PU’s single turbocharger works by using hot gases from the engine’s exhaust system to spin a compressor that increases the air and fuel mix going into the engine.

The MGU-K is one of the most complex parts of the package, performing several roles. It regenerates energy from the car’s braking system into electricity that is fed to the energy store. The MGU-K also deploys energy from the store to the drivetrain, delivering up to 120kW (160BHP) in additional power when required. This energy can also be deployed to the MGU-H to support the turbocharger.

Through the MGU-H, heat from the ICE’s waste exhaust gases drives a generator to create energy. This can be sent directly to the energy store or to the MGU-K.

The MGU-H can work in both ways – either taking energy out or restoring it. Primarily it supports the turbocharger, helping the compressor get back up to speed when accelerating to minimise turbo lag and maximise performance.

The maximum amount of energy that can be deployed from the energy store to the rear wheels over a single lap is 4MJ, which equates to around 30s of extra power per lap.