There is little doubt about the potential for growth in the Asian market and China in particular. Air travel has grown sharply in China, amid relatively strong economic growth. This has seen strong growth among Chinese carriers and airports, and an increasing focus on international services.

However, China still has some way to go to match the propensity for air travel seen in some other Asian markets. Malaysia, for example, has only a relatively slightly higher average GDP/capita than China, but has more than four times as much travel propensity (measured in departing seats per capita).

China’s well-developed rail system partially explains this, as well as lower level of inbound tourism and lack of island links. However, it appears to point to great growth potential, especially as market competition develops further. 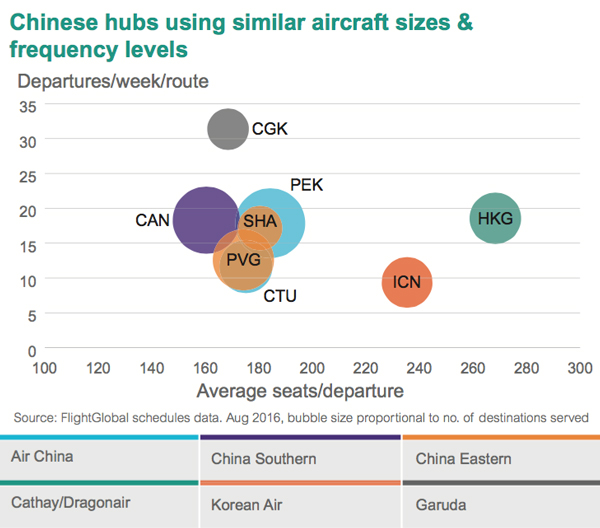 China’s carriers operate a relatively small number of regional jets and widebodies, largely focusing on narrowbodies, and this is evident in operation at the country’s three biggest hubs. Air China at Beijing, China Southern at Guangzhou and China Eastern across two Shanghai airports all offer on average two to three daily flights per route primarily using Airbus A320s or Boeing 737 family on intra-Asian services, with an average of 150-180 seats per departure.

Other Asian hubs make more use of widebodies. For example Cathay Pacific, including Dragonair, use 270-seaters on average at Hong Kong.

This concentration on narrowbody operations is further illustrated when comparing Asia’s biggest hub – Beijing – with the biggest airports in Europe and North America.

Beijing has very few flights with fewer than 150 seats, but also very few with between 180 and 240 seats, or widebodies with more than 310 seats.

Atlanta, dominated by Delta transfer traffic, has large numbers of 50-110 seater aircraft, very few widebodies, and relatively few flights with 160-200 seat narrowbodies. But, London Heathrow, which like Beijing is also congested, has more 140-150 seaters flown, and significantly more 190-260 seaters than Beijing. There are many more 400+ seaters flown at Heathrow than at any Chinese airport.

In terms of alleviating congestion at Chinese airports, it seems there is an opportunity to increase use of larger single-aisles (A321, 737 Max 9) with 180-240 seats on domestic and regional services, as well as to increase use of twin-aisles on the trunk routes.

The new Beijing airport could offer the opportunity to develop more transfer traffic, by developing a true hub-and-spoke model, or to increase frequencies using smaller aircraft. Whilst this appears achievable, a major increase in ATC capacity and efficiency is required. In fact, many runway and terminal capacity increases are already happening in China, but ATC seems likely to remain the major constraint.

Editor’s note: This article is based on parts of a presentation Richard Evans will deliver in full at the Strategy Summit during World Routes in Chengdu on Sunday 25 September at 10:20. For more visit FlightGlobal.com/Consultancy