The demise of TransAsia Airways on 22 November, while not completely unexpected, came earlier than most had anticipated.

The Taiwanese carrier was like a boxer in the ring, struggling to stand on his feet after taking two solid blows. These took the form of two fatal turboprop crashes within seven months in 2014 and 2015.

The airline vowed to improve its safety culture after investigations attributed the crashes largely to safety lapses by the flight crew. It engaged training academies for pilot training, meted out disciplinary actions and even terminations for flight crew who did not adhere to safety standards, and also recruited veterans from other airlines, all in an effort to raise the bar on safety.

It was on the ropes, but fighting back. But the recourse it took proved to be too little too late, failing to win back consumers’ trust. After all, close to 100 people perished with the turboprop crashes.

Pressures on TransAsia had been mounting for some time, with several indications of its troubles in recent months. The airline halved its order for Airbus A321neos in April and ballooning losses led it to ground two A330s and announce plans to transform into a hybrid carrier two months later. When money became tight it moved to raise up to NT$10 billion through a share issue.

In October, it pulled the plug on its less than two-year-old budget unit V Air. Analysts agreed that the move made sense, since some of the budget unit’s network overlaps with TransAsia’s. The mainline carrier also lacked strong premium traffic, and its move towards hybrid model - for which it did not a provide a clear plan for - also risked brand dilution and confusion, as well as further cannibalising market share.

Again, all knew that the 65-year-old carrier was struggling but many expected it to still make a recovery, and few expected it to throw in the towel so soon.

A telling sign of deeper trouble emerged when the airline started having trouble taking delivery of its on order A321s and ATR 72s, due to difficulties in securing financing. Local banks were unwilling to be involved, sources say, because of the airline’s losses, lack of a clear restructuring plan, and poor prospects.

At the press conference on 22 November, announcing plans to shut down and liquidate the carrier, chairman Vincent Lin said that TransAsia was up until 21 November still trying to secure capital from potential strategic investors.

That obviously failed to come through and the board ultimately made a “painful decision” to shut down the carrier. Its losses for the first nine months of the year had amounted to NT$2.09 billion.

A shareholder’s meeting to approve the decision to wind up will now be held in January, and a liquidator will thereafter be appointed to manage its assets and settle all claims.

TransAsia’s demise is however expected to have a limited impact on the Taiwanese aviation market, with giants EVA Air and China Airlines expected to step in quickly to fill the gap it leaves behind.

Even before its safety troubles, TransAsia was already the smallest of the three listed Taiwanese carriers, both in terms of network and fleet size. Just before it shut down, the carrier had 19 aircraft in service - six Airbus A320s, five A321s and eight ATR 72s.

Marketshare on services out of Taiwan - November 2016 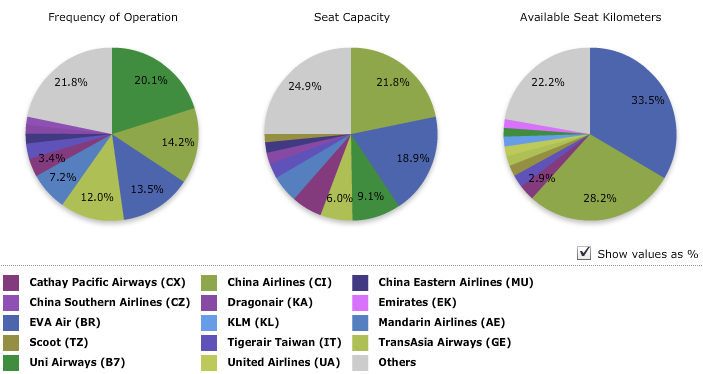 Data from October 2016 clearly shows its decline over the last two years, accounting for just 6% of all seats out of Taiwan, compared to China Airlines (22%), EVA (19%) and even falling behind EVA's regional subsidiary UNI Air (9.1%).

The majority of TransAsia’s services were to cities in Japan and China - two regions that are also well-served by EVA and China Airlines. Its top three routes were Kaohsiung-Magong, Taipei Magong and Taipei-Osaka.

The decline in cross-straits traffic following the election of pro-independence president Tsai Ing-wen did not help TransAsia's case. The change in government with the Democratic Progress Party in power also brought with it adjustments that the airline had to make.

TransAsia’s death is a clear reminder of how safety is second to none in the aviation industry, and that only the fittest and most agile will remain standing in the boxing ring.