Facing competitors who are pushing the envelope in terms of complexity and novelty, Bell has revealed that it is taking a more conventional route to its proposal for the US Army’s Future Armed Reconnaissance Aircraft (FARA) competition: a winged helicopter called the 360 Invictus.

Currently in the preliminary design phase, the 360 Invictus is scheduled to fly by the autumn of 2022, if the US Army gives Bell a green light and funding to build the first prototype, company executives told FlightGlobal on 30 September. 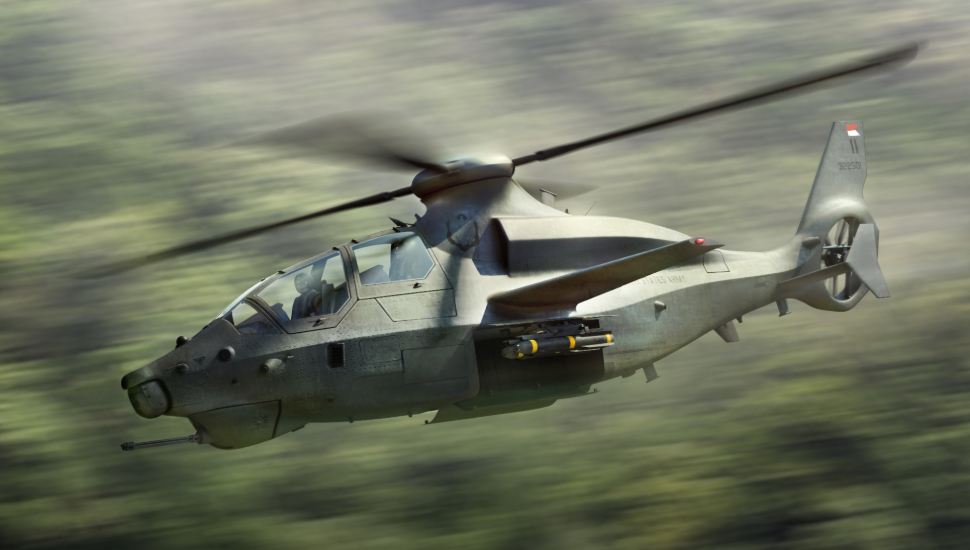 The US Army is working to a rapid timeline, with a plan to develop, flight test and field its next-generation reconnaissance aircraft by 2028. It anticipates awarding two teams contracts in 2020 to build prototypes, with a fly-off competition in 2023. FARA would be a replacement for the service’s retired fleet of Bell OH-58D Kiowa Warriors.

Bell’s 360 Invictus borrows the rotor system of the 525 Relentless, a super-medium-lift commercial helicopter designed to transport up to 19 passengers and aimed at serving the oil and gas industry. The twin-engined 525, which has a fully articulated rotor with five composite blades, is still undergoing Federal Aviation Administration (FAA) certification testing.

The 360 Invictus rotor system and airframe would be significantly smaller than the 525, however. With seating for only a pilot and gunner sitting in tandem, the single-engined aircraft would have only four blades, although Bell declines to say what they will be be made from.

Its smaller size is in part meant to meet the US Army’s requirement for an aircraft with a maximum diameter of 12.2m (40ft) – a specification meant to allow the FARA to manouevre between buildings in urban battlefields. 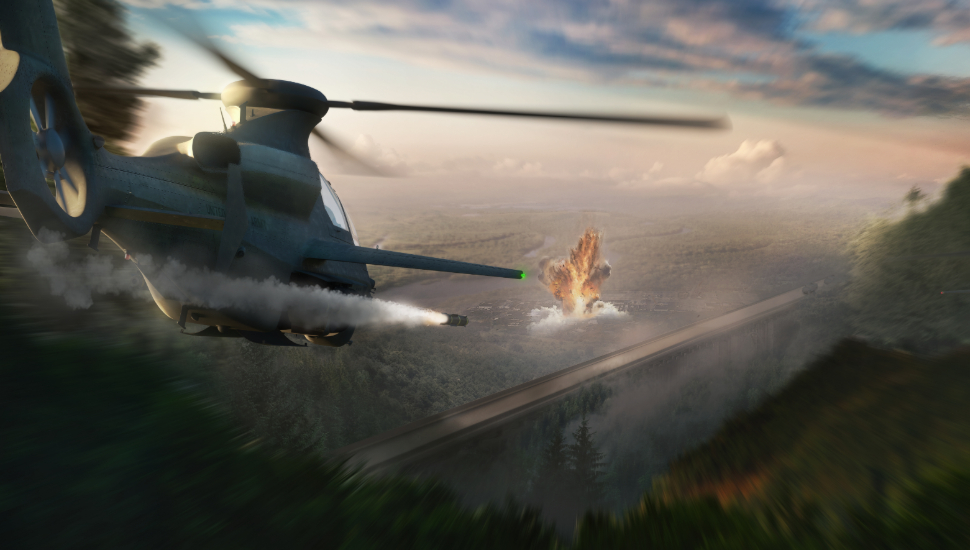 Bell notes that the 525’s rotor system has been tested at speeds above 200kt (371km/h), though it advertises the Invitus’s speed as more than 185kt. The US Army wants FARA to have a cruise speed of at least 180kt.

“Certainly with our configuration there’s opportunities to continue to mature or block upgrade the aircraft [speed], if they want more capability,” says Frank Lazzara, director of advanced vertical lift systems sales and strategy at Bell. “But, we’re trying to ensure that the focus stays on the affordability and sustainability.”

The helicopter’s wing would provide up to 50% of lift when the aircraft flies at 180kt, allowing the articulating rotor to translate more power into forward movement, he adds.

“The high flapping capability is a very efficient propulsor that it is not bearing the lift load,” says Lazzara.

“The canted tail rotor allows for additional capability in a hover,” says Lazzara. He adds that the ducted tail rotor is also more efficient, thus saving power for the main rotor, and is safer for ground operation.

The helicopter also has a patent pending “supplemental power unit,” which the company declines to discuss in detail.

The helicopter would also have a horizontal stabilizer that is controlled by a fly-by-wire flight-control system.

“In forward flight, the flight-control computers would be constantly adjusting the horizontal stabilizer, keeping the aircraft in an attitude that provides the best drag configuration,” says Lazzara.

The company says the fly-by-wire flight control system ought to reduce pilot workload and provide a path to adding autonomous flight capabilities later. Bell says the helicopter would have modular and open systems, with Collins Aerospace supplying avionics hardware and software.

Bell describes the 360 Invictus’s reliance on the 525’s rotor system as a low-risk route for the US Army, claiming that it has high technology and manufacturing readiness levels. However, the commercial 525, which was due to enter service several years ago, has been delayed a number of times and is still finishing the final stages of the FAA certification process.

Bell is also critical of more complex designs, which it says come with inherent cost. This is a veiled swipe at leading competitor Sikorsky, whose S-97 Raider co-axial compound helicopter is widely viewed as the favorite in the FARA competition. The Raider first flew in 2015 and has achieved speeds above 200kt in test flights.

“The cost of operation for VTOL aircraft typically comes down to gearboxes and blades,” says Keith Flail, vice-president of advanced vertical lift systems at Bell. “Typically, the dynamic components are the primary cost drivers on aircraft.”

Of course, Bell is also pitching the V-280 Valor tiltrotor for the US Army’s other Future Vertical Lift competition: the Future Long-Range Assault Aircraft (FLRAA) programme, which is intended to replace the UH-60 Black Hawk. The V-280 relies upon a drive shaft that rotates with its two rotor blades to transition from vertical to horizontal flight.

Moreover, the V-280 has been flying since 2017 and Bell has often noted its flight time is an indication of the programme’s maturity, accumulated testing experience which inherently reduces risk to the US Army should the service contract the company to manufacturer the tiltrotor en masse at the conclusion of the FLRAA competition.

However, because the 360 Invictus is still in the preliminary design phase and not scheduled to fly before the latter part of 2022 it would start out at least six years behind the flight testing programme of the Sikrosky S-97 Raider. Despite being behind Sikorsky’s effort, Bell believes it can rapidly catch up should it start flying three years from now.

“We have a very good process to get the first flight, and then get to second flight faster, and third flight and fourth flight,” says Flail, noting that he believes streamlined digital design and manufacturing processes within Bell can help the company achieve a rapid testing tempo. He cites the Bell V-280 as an example of that tightly integrated design and manufacturing system working well.

The Bell 360 Invictus is designed as an attack helicopter with a 20mm cannon and munitions launcher that can be integrated with air-launched effects and other future weapons.

Because the US Army does not explicitly require a utility variant for FARA, Bell is not presenting its helicopter in that configuration. However, the company says the way the helicopter is laid out means it could be reconfigured to a utility version, allowing for the two variants to share parts, similar to the UH-1Y and AH-1Z, which have 85% commonality.