Piasecki Aircraft has completed ground vibration testing of its X-49A compound helicopter demonstrator, but uncertainty over funding is threatening plans to flight test the modified Sikorsky YSH-60F by early 2007. 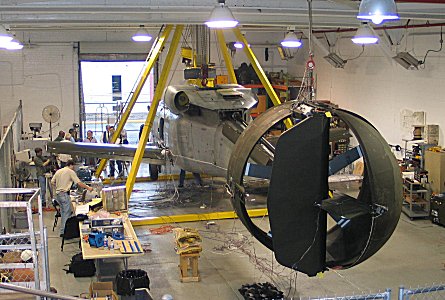 The Seahawk prototype has been fitted with a wing and Piasecki’s vectored thrust ducted propeller (VDTP), which replaces the tailrotor and provides both anti-torque control and forward thrust. The “ring tail” VTDP includes elevator and rudder control surfaces, as well as a deployable visor that vectors propeller thrust to counter torque and provide yaw control in vertical and low-speed flight.

The modification is expected to boost the helicopter’s maximum speed from 150kt (280km/h) to 200kt, says director programme requirements Joe Cosgrove. Transferring lift to the wing as forward speed increases allows the rotor to be unloaded, avoiding retreating-blade stall.

The YSH-60F’s tailrotor driveshaft has been replaced by a strengthened shaft capable of delivering 2,100shp (1,560kW) to the ducted propeller, Cosgrove says. At high forward speed this is the majority of the power generated by the helicopter’s two General Electric T700-701Cs. A production VTDP would draw 2,700shp, he says.

To overcome concerns about the impact on empty weight and hover payload of the VTDP, Piasecki is proposing to replace the helicopter’s auxiliary power unit with a supplementary power unit based on the Rolls-Royce T703 turboshaft. This would provide an additional 650shp in the hover, and would idle in the cruise, says Cosgrove.

Essington, Pennsylvania-based Piasecki is now installing instrumentation on the X-49A, and plans to begin ground testing by mid-year, but flight testing depends on Congress adding money to the US Army’s budget. “We need $8.8 million to get to flight test, but don’t know what we will get in [fiscal year] 2006,” says Cosgrove.

Originally a US Navy programme, but transferred to the US Army in 2004, the X-49A technology demonstration has survived on Congressional “plus-ups”. The House voted $5 million for this year, but the FY2006 US defence budget has yet to be agreed by Congress.

“Five million dollars is short of the stated requirement,” says Cosgrove, who believes “some service money” could be found to fly the X-49A early in 2007.