Leonardo has launched a more powerful version of its BriteCloud decoy jammer optimised for use during the self-protection of medium and large transport aircraft.

"Currently in the final stages of development, BriteCloud 55-T is available to order now for deliveries in early 2019," the company says. It identifies potential candidate platforms as including its own C-27J Spartan, along with the larger Airbus Defence & Space A400M, Embraer KC-390 and Lockheed Martin C-130.

Other assets which could benefit from carrying the expendable decoy include air-to-air refuelling aircraft and intelligence, surveillance and reconnaissance platforms, it adds. 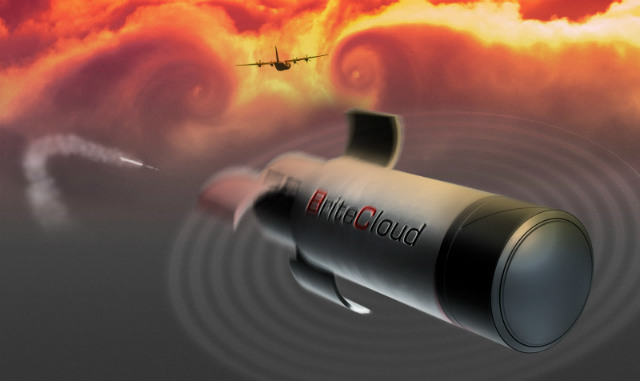 Operational with the UK Royal Air Force's Panavia Tornado GR4 strike aircraft, Leonardo's baseline BriteCloud 55 fits within a 55mm chaff and flare dispenser. With the same weight and dimensions, the new version "has been developed to generate a much more powerful 'ghost' radar signature", the company says. This enhancement has been made possible by improved battery technology, it adds.

The 55-T product was launched at the Electronic Warfare Europe conference in Lausanne, Switzerland, on 5 June.

A BriteCloud decoy is released after an incoming missile has been detected by an aircraft's radar warning receivers, and generates a false radar target which draws the weapon away from its intended target.

Leonardo – which also offers the technology in a smaller "218" format compatible with self-protection systems found on US-produced fighters – says it is "in active discussions with export customers to provide the technology to air forces around the world".

A demonstration of the 218-format system was conducted last year using a Royal Danish Air Force Lockheed Martin F-16, and more recently trials were performed for another nation.

The company launched development of BriteCloud in 2013, with first flight trials conducted using a Tornado the following year.