French investigation authority BEA says an A340-300 (F-GLZO), departing Bogota’s runway 13R on 18 August 2017, encountered windshear on rotation after a headwind of 11kt rapidly switched to a tailwind of 12kt. 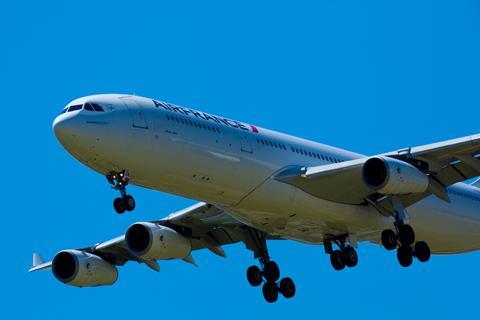 This tailwind increased to 25kt as the aircraft lifted off, causing the airspeed to decline from 138kt to 128kt – some 13kt below the lowest selectable speed, potentially exposing the aircraft to a stall. The A340 also experienced a downdraught of about 5kt.

Despite maintaining nose-up pitch of 13°, the aircraft remained at a height of just 5ft, and an automated windshear warning sounded.

The crew kept the thrust at the maximum take-off setting and the configuration unchanged – as required by the windshear checklist – and the aircraft’s angle-of-attack increased until the automatic stall-prevention system activated, remaining engaged for 4s.

BEA says the tailwind then started to decrease and the aircraft’s airspeed and climb rate increased. The A340 overflew the threshold at 58ft – above the 35ft necessitated by regulations – and it also maintained sufficient margin above obstacles. The windshear warning stopped 21s after lift-off, at 193ft, and the aircraft proceeded to Paris Charles de Gaulle.

Air France had previously introduced an artificial shortening of the runway at Bogota in the aftermath of a prolonged take-off roll of a sister A340-300 (F-GLZU) which, in March 2017, lifted off just 140m from the opposite-direction threshold.

BEA says this shortening, which limited the take-off weight of the type, potentially prevented a worse outcome from the windshear incident.

“Without this precautionary measure, the weight of the aircraft could have been greater,” it states, pointing out that the aircraft would then have been late reaching rotation speed if the windshear had occurred after the V1 decision speed.

While BEA’s analysis could not determine the additional distance that would have been required to reach rotation speed in such circumstances, the inquiry says: “Not being able to reach [rotation speed] before the end of the runway could have represented one of the undesired events for this serious incident if the precautionary measure had not been in force.

“This measure taken by [Air France] to reduce the risk of a long take-off therefore also reduced the risks associated with windshear at take-off.”

BEA says the weight restriction had forced the crew to wait for a fall in outside air temperature to 15C in order to carry out the flight will all the planned payload, and the A340 also experienced a substantial wait of 24min at the holding point for runway 13R after the pilots informed tower controllers that they could not take off during a storm.

During the wait the controllers communicated with two departing Avianca flights. Both reported rain at the end of the runway but the Air France crew was unable to follow these transmissions because they were conducted in Spanish.

With no detection of windshear, says BEA, the crew was relying on air traffic controller information to assess the risk during take-off. Controllers had wind data at the four runway thresholds but this information – the only hint of possible windshear – was not given to the crew during the take-off clearance.

“Once the aircraft had entered the windshear…the crew had little means available to them to restore safety margins and could only act on the aircraft’s pitch to prevent both stalling and collision with the ground or obstacles,” states the inquiry.

This means measures to reduce the risk associated with windshear primarily take place before any such encounter.

Air France published an internal directive, six days after the incident, requiring Bogota crews to ask the controller for threshold wind conditions and to take into account the most unfavourable wind before take-off. The carrier’s pilots also have the wind measurements at the four thresholds available via electronic flightbag.