US authorities are stressing the importance of proper instrument cross-checks on Boeing 757s and 767s to prevent escalation of incidents caused by inadvertent activation of go-around mode on the types.

The warning follows the fatal accident involving an Atlas Air 767 freighter on approach to Houston in February 2019, the inquiry into which concluded that the first officer inadvertently nudged a go-around switch, and then over-reacted to the aircraft’s increase in thrust by pitching it sharply nose-down.

“With an effective instrument scan the [pilots] could have recognised the mode change associated with the go-around mode activation,” says the US FAA in a newly-issued safety bulletin to operators.

Despite cues from the flight-mode annunciator and other indications, neither pilot was aware of the change in the aircraft’s automated mode and flightpath. The crew did not recover the 767 from the dive and it crashed in Trinity Bay.

On the 757 and 767 the go-around mode is armed when the aircraft’s flaps or slats are extended, or when the glideslope is in the active pitch mode. This allows either pilot to activate go-around by pushing a switch located on either thrust lever. 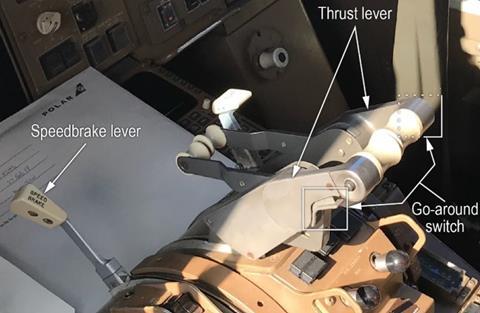 Layout of the thrust levers, speedbrake handle and go-around switch on a 767

The crew training manuals for each aircraft recommend the flying pilot keeps a hand on the speedbrake lever when the speedbrakes are extended – this is to remind the pilot to retract them when no longer required.

Full-flight simulator demonstrations conducted after the Atlas 767 accident showed that light turbulence could “reasonably cause” the pilot’s arm to move enough to activate the switch inadvertently.

The FAA bulletin acknowledges that such activation is a “rare event” but it nevertheless is recommending that pilots, operators and training providers be made aware of the circumstances of the accident and the close proximity of the speedbrake and flap levers to the go-around switches.

“Emphasis on proper instrument cross-checks could help to prevent inadvertent events such as these from escalating,” it adds.