In a lightly attended Dubai air show press conference about 15 months ago, then-Engine Alliance president Dean Athans delivered an unexpected message. The joint venture between GE Aviation and Pratt & Whitney was evaluating a wide range of performance upgrades for the GP7200, including offering an all-new engine to power the Airbus A380.

"I wouldn't take anything off the table," Athans said at the 19 November 2013 press event.

With those words, Athans opened a contentious public debate that still continues on whether Airbus should add the A380 to a long list of re-engined commercial aircraft models now in development.

How Airbus answers that thorny question could shape its own product strategy for decades, figure large in Rolls-Royce's plans for a new generation of widebody engine technology, and, not least, provide a clear response to a request from by far the A380's biggest customer – Emirates – with orders for dozens of new A380s possibly hinging on the outcome.

With strong interest from Emirates and Rolls-Royce – Engine Alliance's competing supplier to power the A380 – to move forward with a re-engining programme, Airbus faces a clear choice. In December 2014, Airbus chief executive Fabrice Bregier vowed that Airbus would re-engine the A380 eventually, but his comments only came after the airframer's finance chief sowed doubts about the future of the A380.

Some prominent analysts, however, remain bewildered that Airbus is even considering the idea of re-engining the A380. Teal Group's Richard Aboulafia, a noted A380 critic, believes Airbus's corporate leadership will ultimately reject the project.

"This is one of the great ironical moments of my career. I say it doesn't happen because I have faith in Airbus," said Aboulafia on 11 February at the Pacific Northwest Aerospace Alliance conference in Lynnwood, Washington. "If you think that they are run by, shall we say, less-than-gifted professionals, then you'd say: 'Oh yeah, they'll do it anyway.'"

Aboulafia's opposition to a re-engining programme runs deeper than his long-held opinion that the A380 has been a commercial flop. If the A380's largest customer is excluded, Airbus's backlog dwindles to 35 aircraft, representing about 14 months of production at current delivery rates. To Aboulafia, that represents a "complete absence of commercial activity".

Compounding the sales inactivity is the lack of a confirmed secondary market for the aircraft, with the first A380s delivered to Emirates due for retirement in a few years.

"If you launch a re-engined version, you've just made that problem so much worse," he says.

Simon Pickup, a strategic marketing director for Airbus, defended the A380's sales record in a 12 February presentation at the PNAA conference, noting that Aboulafia excludes the type's most important customer in his analysis.

"I don't know why he does that because we did sell 140 A380s to Emirates. They're in the orderbook. By excluding them it gives a slightly skewed picture, I think," Pickup says. "So every time he takes them out, we'll put them back in again."

Not surprisingly, Airbus believes that the A380 is still slightly ahead of its time but demand will pick up as traffic grows. Aboulafia has noted that aircraft sizes have declined as international passenger traffic has increased over time, with the Boeing 747-400 often replaced on routes by the 777-300ER. Pickup, however, points to the rise of mega-hubs that serve at least 11,000 passengers per day. That number will rise from 41 to more than 90 over the next 20 years, Airbus forecasts, and will drive new demand for superjumbo aircraft, Pickup says.

Moreover, it may be unwise to exclude Emirates' input from the strategic equation. As the single-largest A380 buyer, chief executive Tim Clark still carries much sway in Airbus's boardroom.

"With more than half of the final backlog now invested in Emirates, their influence here is clearly key," says Rob Morris, head of Flightglobal's Ascend consultancy. "I suspect they will be the ultimate drivers of the re-engine decision. That could also stimulate some potential replacement demand with other existing operators."

Boeing plans to start delivering the 777-9X to Emirates in 2020, with the latest widebody aircraft propulsion system officially in development. The GE9X will enter the market two generations of engine technology ahead of GP7200s powering Emirates' fleet of A380s, which have played a critical role in the Middle Eastern carrier's strategy of tapping slot-controlled airports in Europe.

"Part of what's going on is Emirates: they believe they have a seat-kilometre cost advantage with the A380," says George Hamlin, president of Hamlin Transportation Consulting. "When the 777X comes along, they are gong to lose that advantage." 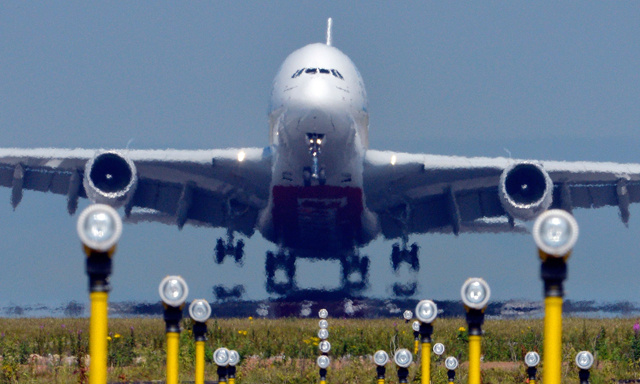 At present, Airbus's A380 superjumbos are powered either by Rolls-Royce's Trent 900 turbofans or by GP7000s from Engine Alliance

Despite that economic incentive, Hamlin counts himself with Aboulafia among the analysts opposing the project. Among widebodies, the A380's operating economics will suffer even with new engines, as the A350, 787 and 777X also have the advantage of lighter-weight, composite structures. "There is some risk [the A380] becomes the last metal albatross if you want to keep it in production for so many years," Hamlin says.

For months, Airbus has been preaching patience on the timing for a final decision. It is currently focused on testing the A320neo family and developing the A350-1000 and re-engined A330neo family. Any move to similarly upgrade the A380 would fall at the back of that queue, which extends through the end of the decade. That is also around the time that Emirates' performance requirements, Rolls-Royce's engine roadmap and Airbus's product strategy could converge.

"If one looks at the early 2020s, there may be a confluence of available engineering resources, better engine technology, falling A380 sales and increased 777X competition, which may well lead to an A380neo," says Chris Seymour, Ascend's head of market analysis.

Engine technology has already come far since the A380 arrived in service. Both the Engine Alliance GP7200 – featuring a high-spool derived from the GE90 and a low-spool adapted from the PW4000 – and the Rolls-Royce Trent 900 represent the last application of propulsion technologies developed in the late 1990s.

Although the Engine Alliance opened the public debate on A380 re-engining 15 months ago, the joint venture is no longer willing to launch a new clean-sheet engine project. GE is already consumed delivering its half of the CFM International Leap engine family and the General Electric GE9X for the Boeing 777X.

"Others may have a different idea but for us I would be really remiss if I led you to believe we were interested in [an A380 re-engining programme]," GE Aviation chief executive David Joyce said in March 2014.

Rolls-Royce, indeed, has a different view driven by a long-range strategic need. The manufacturer has outlined a design concept for an UltraFan engine that could be available by 2025, possibly featuring carbon/titanium (CTi) composite fan blades, a low-pressure section reduction gear and a variable-area fan nozzle. That engine could help Rolls-Royce achieve a new level of fuel efficiency beyond that of even the GE9X.

However, an intermediary step would help Rolls-Royce bridge from the Trent XWB programme to the UltraFan. The manufacturer's internal research and development programme – dubbed Advance – formed the basis of its proposal to power the 777X, but that was rejected by Boeing. The re-engining programme for the A380 would offer an ideal half-step, allowing Rolls-Royce, for example, to introduce the CTi fan blades on the Advance engine and then insert more efficient variable pitch blades on the UltraFan.

The correlation of Emirates' desire for more fuel efficient aircraft and Rolls-Royce's need for an application for the Advance projects has persuaded some analysts that the A380 re-engining programme is inevitable. Kevin Michaels, a senior consultant for ICF, argues that Rolls-Royce is likely to pay most of the estimated $2.5 billion development cost for such programme, which lowers the overall economic risk to Airbus.

It does not, however, remove the overall economic and strategic concerns over the concept. If order activity for the A380 does not pick up, Airbus faces the possibility of A380 production shutting down before a re-engined version becomes available.

"If not launched this year, [entry into service] probably wouldn't be until 2021. With no orders except Middle Eastern carriers, production might end before then," says Ascend senior consultant Richard Evans.