GE Aviation’s Business and General Aviation Turboprops business in Prague – the former Walter Aircraft Engines – combines the Czech company’s decades-long expertise in small turboprop engines with the US giant’s vast experience in industrial production and new product development. When GE took over Walter in 2008, it inherited a pre-war factory ill-designed for modern manufacturing, but on the plus side, a product line headed by the long-enduring M601 turboprop – which powered the Aircraft Industries L410 among others – as well as a highly-skilled workforce and heritage as one of the country’s most notable aerospace brands.

Now in a refurbished building in Letnany, outside Prague, GE BGA Turboprops has all the markings of a 21st century manufacturing facility, with gleaming machine tools and six sigma streamlined workflows. As well as relocating sites, GE’s first move on taking over Walter was to begin development of a new family of 750shp (560kW) to 850shp engines, based on the architecture of the M601, but with several improvements, including the use of a corrosion-resistant titanium alloy compressor, and replacing bladed discs with blisks.

Those engines – the H80 and its derivatives, the H75 and H85 – are now certificated, with the H80 set to power the Nextant King Air G90XT, a re-engined version of the King Air C90, which enters service later this year. The deal was one of the big stories of the National Business Aviation Association convention in October last year. Additional applications include the single-engined Primus 150 being developed by China’s CAIGA and the Rysachock utility twin produced by Russia’s Technoavia. 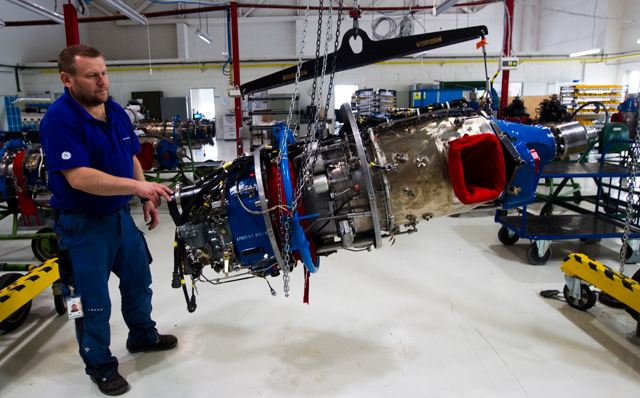 The H80, which received approval in 2011, was notable because it was the first GE engine to be developed outside the USA, and to be certificated first by EASA. The engine is already installed in the Thrush 510G crop-spraying aircraft, while the slightly lower-thrust H75 derivative is available as a retrofit in and on new-build examples of the Aircraft Industries L410 utility transport. A new version of the Let 410, the NG, due to fly for the first time later this year, will have the H85 variant.

However, GE has bigger ambitions for its Czech subsidiary, with plans to develop two further families of engines in the 1,100-1,200shp and 1,800-2,000shp categories, broadly based on the architecture of the H80. This would take it directly into competition with the market-leading PT6A from Pratt & Whitney. “We got into this to start competition with the PT6A,” says Milan Šlapák, commercial director of GE’s Czech business.

When GE bought Walter, most of its output was for maintenance, repair and overhaul, at only 10 or 12 new engines a year. In addition it was carrying out some third-party work, which has now ceased. The success of the Thrush 510G in the growing agricultural sectors of South America and China and the L410 has helped drive production up. The global installed fleet of around 700 engines in service – 44% in the CIS, 20% in Africa and 18% in Latin America – has started to grow again with the H80.“Last year we did around 65 new engines. This year we will do 80 to 90,” says Slapak.

The workforce now stands at around 400 and revenues have grown from around $38 million in 2012 to an estimated $78 million this year. But this is likely to be eclipsed once GE starts establishing what it calls a “turboprop centre of excellence” with GE predicting a turnover of $300 million at its Prague operation by the end of the decade. While there is room to grow at its Letnany facility, key to creating what it calls a “scalable” centre of excellence will be a new engineering department employing more than 100 engineers. This could be sited just outside Greater Prague to benefit from better support for economically deprived regions from the Czech government and EU.

GE is not putting any firm timescale on when any new products will be on the market, but with one of the world’s top three aero engine brands behind the business, the Czech Republic looks like it will have another aerospace powerhouse by the end of the decade.