ANALYSIS: How Heathrow is feeling the squeeze

Following the UK Airports Commission's recommendation for development of a third runway at London Heathrow to meet future airport capacity needs, analysis from Flightglobal’s Ascend consultancy highlights how lack of capacity at the UK’s biggest airport has seen it lose ground to other big hubs, in Europe and the Gulf. Airlines operating from Heathrow have also significantly changed their customer offering to adapt to the squeeze on slots.

Based on analysis of Flightglobal’s Innovata airline schedules data by Henk Ombelet, these are some of the ways Heathrow’s business model has been impacted by its capacity constraints.

Routes: Heathrow has a lower number of destinations, at around 160, than all its European competitors, as well as Dubai International, which is at the vanguard of the new Middle Eastern hubs competing with European airports for long-haul traffic between East and West. Both Dubai and London Gatwick have vaulted over Heathrow in the past 10 years, while Amsterdam, Paris Charles de Gaulle and Frankfurt have remained consistently ahead, with today each serving between 250 and 300 cities. During that time, Heathrow’s routes have fallen slightly.

However, frequencies are typically lower at other airports. Airlines operating from Heathrow will tend to increase frequencies on established routes before trying out new routes with low frequencies. This means Heathrow could be missing out on many emerging destinations.

Because of its reliance on long-haul and particularly the transatlantic market, Heathrow’s European destinations lag far behind other major European airports, but even Dubai is catching up in terms of European cities served. Heathrow is tending to swap European services for long-haul alternatives as exemplified by the recent slot sale by SAS (operating a European service) to American Airlines.

Heathrow’s long-haul destinations have also fallen over the past 10 years, from over 100 to around 95. This is despite the move of several US services from London Gatwick to Heathrow, something that saw the smaller London airport’s long haul destinations dip significantly after a peak of over 80 towards the end of last decade. While Charles de Gaulle and Frankfurt have seen long-haul destinations rise to just below the 140 mark, the big winner has been Dubai which has seen long-haul services soar from under 100 in 2004 to over 180 today. 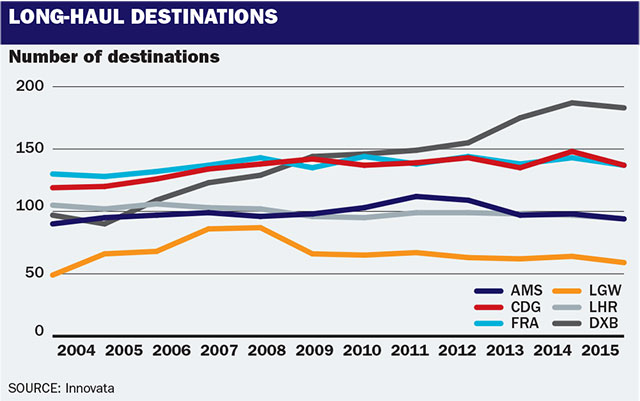 Aircraft size: While average aircraft size has been rising at all Heathrow’s competitors, it remains much higher at the London hub, at just over 200 seats. The equivalent figure is between 160 and 180 at Amsterdam, Frankfurt, Paris Charles de Gaulle and London Gatwick, smaller than the average aircraft operating from Heathrow a decade ago, which was just below 200 seats. In 2004, the average aircraft operating from the other airport ranged from just below to just over 150 seats. The gap between Heathrow and its competitors can partly be explained by the London airport’s larger proportion of long haul flights. However, even just for European flights, the average Heathrow airliner is still bigger.

Seat capacity: mainly as a result of the larger aircraft sizes, overall seat capacity at Heathrow has grown slightly. However, although it remains around a quarter higher than its closest European competitors, Paris and Frankfurt, these airports, as well as London Gatwick and Amsterdam, have grown their seat capacity faster. The big winner, however, has been Dubai, which has more than trebled its seat capacity in 10 years and in the past two years overtaken Heathrow.

North Atlantic: This remains Heathrow’s strength, with more than twice as much seat capacity to the Americas as Charles de Gaulle or Frankfurt. This is driven mostly by frequency. Frankfurt, for instance, has six or seven flights a day to New York, while there are 28 from Heathrow.

Heathrow’s North American destinations have also increased from around 21 in 2004 to 32, partly as a result of the transfer of services from Gatwick. 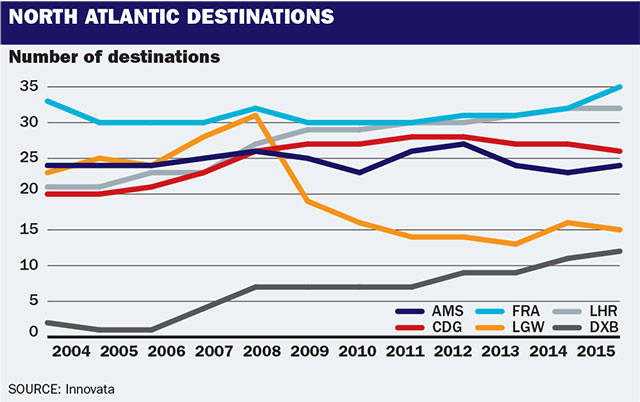 However, Heathrow cannot be complacent. As with the other Gulf airports, Dubai’s frequencies to North America are soaring, partly as a result of Emirates’ growing fleet of large cabin, ultra-long-haul aircraft such as the Boeing 777 and Airbus A380. Although it is still behind the five European airports (including Gatwick, which has seen its North American services more than half to 15 since 2008), Dubai has gone from very low single figures to 12 in a decade.

Interestingly, while the big three US carriers are making the most noise about the Gulf carriers’ expansion in their backyard, European carriers may be suffering even more as a result, losing both O&D [origin and destination] traffic between the USA and Middle East that they used to carry, but also transfer traffic through the Middle East to, for example, India or Africa.

Number of flights: This has remained constant at Heathrow for the past 10 years as the airport is at capacity. Paris has seen a reduction since 2008 as the French economy has been on a downward trend. Gatwick has also seen an increase in flights as the low-cost carriers have established a very strong presence at the airport.

Peter Morris, chief economist with Flightglobal Ascend, contends that Heathrow’s lack ability to expand “leads to all sorts of inefficiencies, including price and delays” and that for as long as it does not have additional runway capacity will “become a more expensive airport”.

Current and projected demand for slots means “you could justify two more runways at Heathrow without a shadow of a doubt. An awful lot of demand is being suppressed. Where does that demand go? To other UK airports maybe. Certainly to other European airports. Or people just don’t fly.”

Heathrow’s biggest challenge, he says, is that while the temptation is to push for a higher mix of large-capacity, long-haul destinations, cutting down on European and other feeder routes chokes off traffic for these services – transferring passengers currently make up around a third of travellers at Heathrow. “Remember, if you just have long-haul routes, Heathrow doesn’t work,” he says.

Having several other London airports, including Gatwick, Stansted, Luton and City, focused on European routes and soaking up some of the demand may seem like a strength for the UK capital, says Morris. “In fact, you could say it’s the most inefficient airport system in the world.”