Rolls-Royce Trent has been synonymous with advanced aero engines for nearly three decades. Indeed, the series has been successful enough for this namesake of British engineering to claim that gas turbines named after the mighty waterway flowing past its Derby home power a market-leading 40% share of the new generation widebody fleet. The Airbus A330, A340, A350, A380 and Boeing 777 and 787 all feature Trent power.

Skipping to a more granular view of the Trent story, however, recent headlines have focussed on technical troubles. Boeing 787 operators including ANA have since 2016-2017 seen a spate of durability issues affecting Trent 1000 compressor and turbine blades. As recently as this August, chief executive Warren East told FlightGlobal that while intermediate-pressure turbine blade problems had been “pretty much” resolved, he noted that the issues with these components were not fully understood until this year, and said he anticipated a “dynamic” situation until at least next year.

R-R, of course, is not alone today in having to see its customers through technical difficulties. Similar tales apply to all of its peers, to the extent that airlines might be wondering if their industry has passed beyond a golden age of mechanical reliability. One expert has recently raised the prospect that, in their quest to maximise fuel economy, engine makers are being forced to stress architecture, components and materials to their limits.

Whatever the specific issues challenging the engineers grappling with today’s engine programmes, R-R is clear about the future – and the future calls for a new generation of gas turbines. As its chief engineer for future programmes Phil Curnock puts it, R-R recognises that the basic Trent architecture, however successful it has been, is reaching the end of its flightpath. ACARE – the Advisory Council for Aviation Research and Innovation in Europe – has set aviation the 2050 challenge of slashing per-passenger kilometre emissions of CO2, NOx and noise by 75%, 90% and 65% respectively relative to the year 2000. Those are massive cuts – NOx emissions will have to approach zero – and the tried-and-tested three-spool Trent architecture won’t be able to do it.

The other side of that future challenge is market growth. R-R forecasts global demand over the next 20 years of nearly 32,000 new passenger aircraft, with half of the engine thrust – and half of the value – coming in the widebody sector where R-R features.

Electrification remains decades away and may ultimately warrant the term “revolutionary”. Meanwhile, as is invariably the case with any already highly optimised system, “optimising” the gas turbine is challenging enough. The solution is well-known: improve propulsive efficiency by increasing the amount of air moved by the main fan rather than passing through the hot core, which is to increase the so-called bypass ratio; and improve thermal efficiency, to run hotter.

Both of those approaches involve pushing designs and materials beyond the limits of current-generation technologies, so it is no surprise that by the time its planned UltraFan engines are ready for service in 2025, R-R will have been working on the project for a decade. The result will be a powerplant that beats Trent fuel efficiency by a quarter, does away with the low-pressure turbine and features a gear-driven front fan powered by the intermediate pressure turbine.

UltraFan shares the gearbox concept with Pratt & Whitney’s PW1000G, but extends the gearing reduction to around 4:1; the new architecture will also be scalable down, to suit narrowbody airliners.

Curnock describes the Trent XWB – which powers A350s – as a “great start”, but notes the limits of that engine’s design. The length of the core is at practical limits, and dealing with that problem and a larger fan puts a heavy heat load on bearings and other components. The gearbox lets R-R put more work on the hot core and less on the intermediate compressor while losing the low-pressure turbine altogether. He describes the development approach as “starting with the core and wrapping a low-pressure system around it”.

Much of the UltraFan vision is already known. The composite fan, which will replace hollow titanium, to keep weight down, has already been flight-tested. The core around which the low-pressure system – including fan – will be wrapped is being tested as R-R’s well-trailed Advance3 project. This next-generation core has already accumulated 100h of bench testing, built between a Trent XWB-84 fan and Trent 1000 low-pressure turbine. Gearboxes have been under test at a purpose-built facility near Berlin since late 2017. 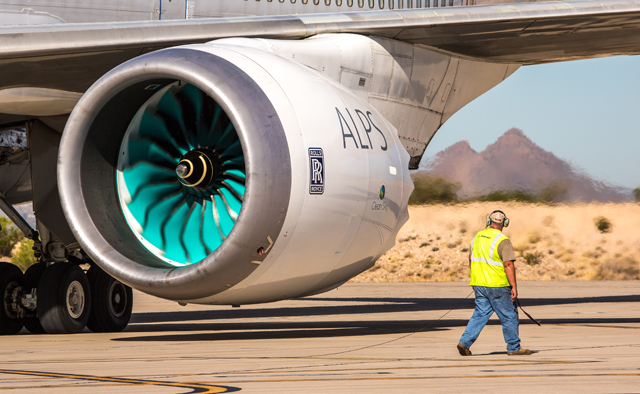 All of those tests have been successful enough that, this summer R-R was able to announce it had frozen the UltraFan design and was aiming for ground testing from 2021. In that regard, the project has entered a detail design phase.

Curnock and chief engineer Ash Owen describe the Advance3 core as “robust” and a “really good success story”. Testing has provided “millions” of data points. So much, indeed, that the engineers have opted to stop for analysis before continuing testing in 2019.

Other concurrent work is being done on high temperature technologies and additive layer manufacturing, or 3D printing. That technique, notes Curnock, is critical, in part for slashing development time by turning designs into components quickly.

Related to both design and manufacturing are, of course, advances in materials. Nickel and titanium alloys, ceramic matrix composites and carbon composites all play a role in reducing weight and improving high-heat performance.

But the fourth strand in R-R technology development is what Curnock calls “intelligent systems”. Increasing digitisation of design and prediction – and hence testing – has vastly sped up product development. This is hardly unique to R-R, but the company can point to one stand-out instance in its experience; the XWB engine, says Curnock, was certificated without doing a live blade-out test, because authorities were satisfied by the demonstrated predictive power of a virtual demonstration based on previous, live experience.

UltraFan, then, is being developed as virtual reality is starting to replace actual testing and accelerating design.

Meanwhile, R-R is working with Airbus and Boeing on better integrating engines and airframes. Curnock points to Airbus collaboration on UltraFan nacelle development, and work with Boeing on shorter inlets that will hopefully make next-generation engines “more installable”. This aspect of the programme is increasingly important, he says, because the growing size of engines is forcing aircraft designers to nestle engines tightly against wings – or in the case of some business jets consider setting them partly into the rear fuselage. Aerodynamics are thus increasingly complicated and, says Curnock, this notion of airframe-engine integration will ultimately be a critical aspect of new aircraft shapes such as those which might carry hybrid-electric systems.