Cathay Pacific’s share price has slipped close to 14% over the last week, after it announced an 82% plunge in its net profit for the first half of the year, falling well below analysts’ expectations.

The airline attributed its poor performance to a slowdown in the Mainland Chinese economy and economic fragility, which put a dampener on corporate travel. This adversely affected premium class demand, particularly on long-haul routes.

The Hong Kong flag carrier says corporate travel originating from the city “was well below expectations”, particularly to London and New York, where numbers travelling fell for the first time since 2009 when it was hit by the financial crisis.

This is especially concerning for Cathay, considering it has always relied heavily on its premium business, drawing high yields from the front end of the cabin.

Yield on services dropped across the board, amounting to an overall 10.1% decline. The largest drops were however on services to the Southwest Pacific and South Africa (-14%), Europe (-12.6%) and Southeast Asia (-10.5%).

“Yield was further affected by strong competition, adverse currency movements and a significant reduction in premium corporate travel,” says Cathay, adding that it also sold premium tickets on promotional prices to leisure travelers in an attempt to make up for the shortfall in corporate travel.

The carrier adds that tourism from Mainland China to Hong Kong has been weak, and in response it has been attempting to lure Chinese passengers to connect through Hong Kong. This has been met “with some success”, and the demand for connecting flights to Australia and North America was “strong” in the first six months of the year.

Cathay is however facing stiffer competition, especially against Chinese carriers which have been rapidly expanding their long-haul networks, especially on direct services to the US. This will no doubt put pressure on yields, as Cathay tries to compete against carriers which will sacrifice yields to gain market share.

During the six months, Cathay’s revenue also dropped 9.3%, despite a 4.2% increase in capacity. Besides weak premium demand, the revenue drop also reflects the suspension of fuel surcharges and weak currencies in some markets. Overall load factor fell 1.4 points to 84.5% during the period.

To compensate for the downward pressure on yields, Cathay must improve its operational efficiency and cut costs where possible. With its incoming Airbus A350s and Boeing 777-9X over the next 10 years, the airline should be able to expand its network and increase frequencies more efficiently, and as it retires older, more fuel hungry types like the Airbus A340s and Boeing 747s. 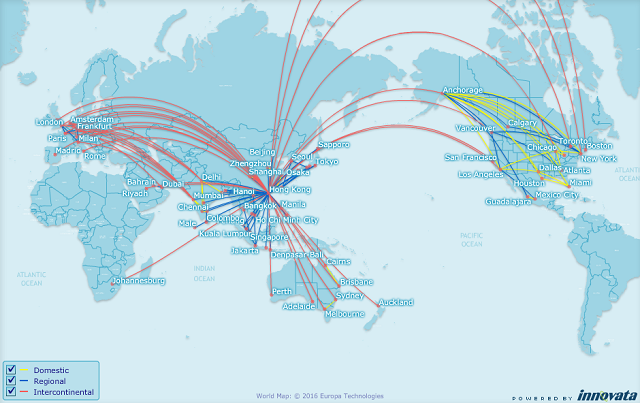 The airline says it is also reviewing its productivity and expenditure, stopped hiring and replacing non-operationally critical staff, and restricting non-essential spending. This is necessary since the current decline in unit costs is still below the fall in overall yield.

More worrying in the short-term is perhaps Cathay’s fuel hedging strategy. The carrier posted a hefty fuel hedging loss of HK$4.49 billion ($580 million) in the first half of the year – which did not help in its overall performance. This is expected to continue into the second half, with the airline having already hedged 60% of its 2016 fuel requirements at $85/bbl.

“We believe this will greatly impact its transit market as we doubt it can fully pass on the cost increase to the customers,” he adds.

Cathay may be in a tough spot where its outlook for the second half of the year remains challenging, but the carrier is far from being in a crisis. It continues to generate an operating profit, although this too has dropped, and has a strong capital and reserves of HK$50.7 billion, to weather through the current slump. It also has a strong partner in Air China – which owns 30% of the Hong Kong carrier. These factors will allow it to continue to pump in capacity and hold on to its market share in the long-term.