The varying strategies of US mainline carriers to Asia is a nice contrast to their convergence elsewhere, ranging from inflight amenities to the structure of their frequent flier programmes.

American Airlines, the smallest of the three to Asia, is growing rapidly, adding nonstops to the region’s megacities, like Hong Kong and Tokyo, at a speedy clip.

United Airlines, the largest US carrier to the region, is building off its strengths and diving deeper into Asia with more nonstop routes from the USA than ever before, including to Singapore and secondary cities in China.

Delta Air Lines stands alone among the three in shrinking its network to Asia, particularly at its Tokyo Narita hub, despite repeated assurances of the importance of the region to its network.

The result of these differing strategies has been a leisurely combined compound annual growth rate (CAGR) to Asia of just 1.2% for the three carriers since 2010, with seats scheduled to reach 13.3 million in 2016, FlightGlobal schedules show. 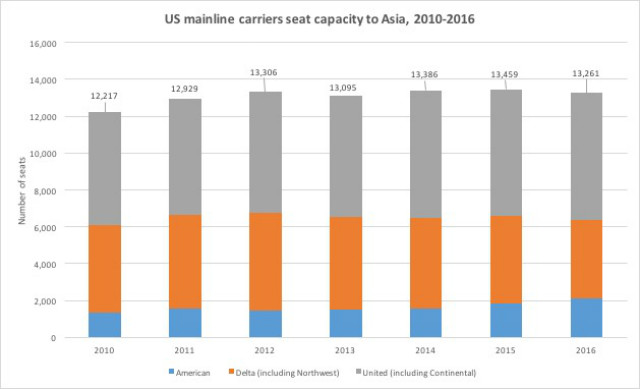 The rest of the market has not been as disciplined, increasing seats at a CAGR of 7.7% during the same period, the data shows.

That has not stopped the big three US carriers, who all acknowledge the importance of Asia to their networks.

“If you’re going to be a serious player in the global market as an air carrier, you have to have a meaningful presence in Asia,” says Chuck Schubert, vice-president of network and schedule planning at American.

Six years ago, American served just three cities on the continent: Beijing, Shanghai and Tokyo. It has since added Hong Kong and Seoul – with its latest new route between Los Angeles and Hong Kong launching this month.

FlightGlobal schedules show that annual seats on the Oneworld carrier to Asia increased more than 56% to 2.13 million this year during the past six years.

American has also added service to Auckland and Sydney since last December, however, these routes is not included in the numbers above.

Aside from the possibility of a new Los Angeles-Beijing route, American plans to “manage” its recent growth to Asia and let new routes mature for the next 12 to 18 months, he says.

United, unlike American, was already the largest US carrier in Asia following its 2010 merger with Continental Airlines. It has focused on its strengths, especially its Pacific gateway in San Francisco, to add new nonstop services to the region, including to Hangzhou, Singapore and Xi’an this year.

Seats have increased at a CAGR of 1.8% since 2010, FlightGlobal schedules show.

Brian Znotins, vice-president of network at United, says the carrier will continue to grow in the region with China at the forefront of its strategy. This is despite of the high industry capacity growth in the market that has put pressure on yields.

“We remain committed to China and continue to add services as demand warrants,” he says, adding that with the continued economic growth in the country he sees US-China service in 10-years as comparable to that between the country and Europe today.

There are no limits on service between China’s secondary and tertiary cities and the USA, while frequencies for service to Beijing and Shanghai have been maxed out by airlines from both countries.

United is not only looking to China for growth in Asia. It is “pursuing” numerous nonstop opportunities out of San Francisco and, as new markets mature, could add additional service to the region from one or more of its other US hubs, says Znotins.

Delta is the counterpoint to both American and United in Asia. It has cut the number of seats it flies to in the region by more than 20% since its capacity peaked in 2012, FlightGlobal schedules show.

The Atlanta-based carrier has shrunk capacity at a CAGR of 1.7% since 2010, the data shows. This is before the recent announcement that it will end service to Tokyo Narita from Bangkok, New York JFK and Osaka by November.

“Our go-forward strategy here includes… reworking our Asia-Pacific footprint to one that primarily supports direct flying between the USA and Asia,” said Vinay Dube, senior vice-president of Asia Pacific at Delta, in August. “Delta remains committed to growing and strengthening Delta’s Asia presence over the long-term.”

The airline attributes the most recent cuts to the recent opening of Tokyo Haneda to 10 daytime flights from the USA. While Delta won two of the five flights available to US carriers, it maintains that this is not enough to support its current service levels at Narita.

This is in contrast to United, which also has a Tokyo Narita hub but has maintained its capacity at the airport despite the opening of Haneda and its own growth in nonstop flights to Asia.

An issue for Delta is its lack of a close partner in Asia. It has a limited equity partnership with China Eastern Airlines that lacks antitrust immunity, and codeshares with a number of carriers including China Southern Airlines and Korean Air.

By contrast, American and United have immunised joint ventures with Japan Airlines and All Nippon Airways, respectively.

“Delta’s drawdowns at Narita undermines its utility as a transpacific airline,” said Henry Harteveldt, a travel industry analyst and founder of the Atmosphere Research Group, in an August interview.

Korean Air offers the best potential connecting alternative to Tokyo Narita for Delta, however, as Harteveldt notes it is hampered by poor mileage earning options on Korean that are important to high-yield frequent fliers and a limited codeshare.

Since those comments, Delta has announced it will re-enter the Atlanta-Seoul market in June 2017 after an eight-year hiatus. It will also add 33 destinations in Asia to its codeshare with Korean. It did not disclose any changes to its frequent flier partnership with the airline.

“[This] announcement shows our commitment to enhancing our partnership with Korean,” says a Delta spokesman, who would not comment on whether it would pursue a joint venture with the carrier. “We will continue to look at ways to further integrate our partnership as we move forward.”

The two airlines have had antitrust immunity, which would allow them to form a joint venture, since 2002.