No-one could accuse the United Arab Emirates (UAE) of lacking a long-term vision for space. The country has a project to put settlers on Mars by 2117. Its recent achievements and immediate objectives are impressive too. The Gulf nation has just sent an astronaut to the International Space Station (ISS), and in June, the Arab world’s first probe to the Red Planet will take off. Named Hope, the craft is scheduled to reach its destination in 2021, the 50th anniversary of the UAE.

No-one could accuse the United Arab Emirates (UAE) of lacking a long-term vision for space. The country has a project to put settlers on Mars by 2117. Its recent achievements and immediate objectives are impressive too. The Gulf nation has just sent an astronaut to the International Space Station (ISS), and in June, the Arab world’s first probe to the Red Planet will take off. Named Hope, the craft is scheduled to reach its destination in 2021, the 50th anniversary of the UAE.

The UAE Space Agency earlier this year signed a deal with Virgin Galactic that could see Al Ain airport become a spaceport and industrial support base for Sir Richard Branson’s space tourism and satellite launch venture. Mubadala, Abu Dhabi’s sovereign wealth fund, was a major investor in Virgin Galactic before the latter’s successful flotation on the New York stock exchange in October. 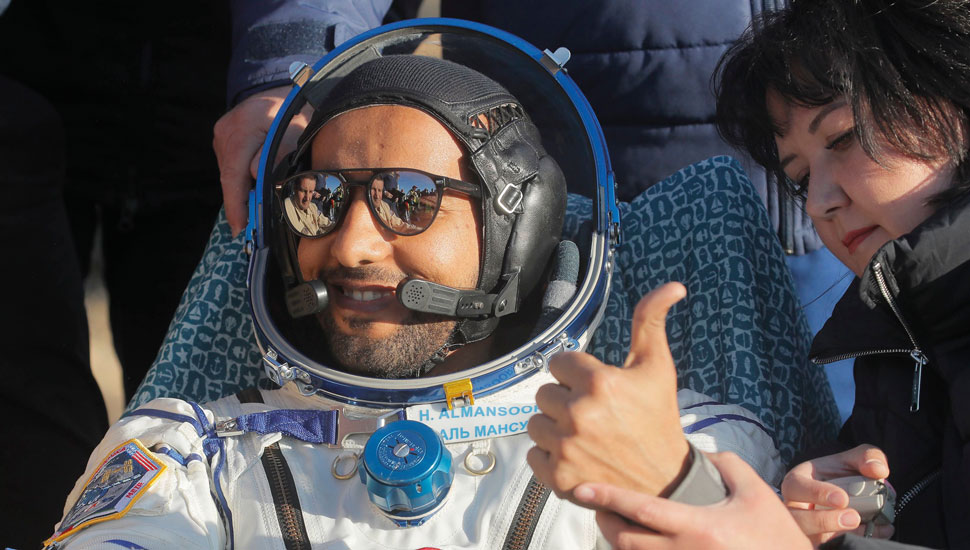 In addition, Yahsat, established in 2007 and also owned by Mubadala, has become one of the top 10 satellite companies in the world. It launched its first communications satellite in 2011, and has since sent two more into orbit. The most recent, Al Yah 3, launched in January last year, provides Ka-band coverage to 95% of Brazil’s population. A merger with mobile satellite services operator Thuraya in August of that year increased Yahsat’s satellite fleet to five.

The UAE’s efforts are not just about “a rich country trying to get a return on investment”, but promoting the nation as a pioneer in space exploration and science, says Mohamed Al Ahbabi, director general of the UAE Space Agency, set up five years ago to spearhead the national space strategy, and the first fully fledged space agency in the region. “The UAE is a country of vision,” he says. “We always talk about the future.”

When Hazza Al Mansouri began his mission to the ISS from the Baikonur Cosmodrome in Kazakhstan on 25 September, it was a moment of huge pride for the UAE. During our visit in late September, electronic billboards on gantries across Dubai’s 12-lane Sheikh Zayed highway proclaimed: “Good luck, Hazza. The nation is with you.” The former military pilot and his back-up were chosen in 2017 from 4,000 applicants to train as the first Emirati astronauts.

While few of them will follow their new hero into orbit, Al Ahbabi believes Al Mansouri’s mission will inspire young Emiratis to take up careers in space science. “It is about inspiring people and raising ambitions,” he says. In fact, the average age of the team working on the Emirates Mars Mission is just 27 – the chief scientist, and UAE minister of state for advanced sciences, Sarah Al Amiri, is in her early 30s. “We have great confidence in our youth in carrying the banner of innovation, achievement and excellence,” Sheikh Mohamed bin Zayed Al Nahyan, crown prince of Abu Dhabi, tweeted in September.

Work on the Hope probe began in 2014, with the UAE Space Agency in charge of planning and managing the programme and 200-day mission, and design and manufacturing taking place at the Mohammed bin Rashid Space Centre. Equipped with a powerful digital camera and infrared and ultraviolet spectrometers, the vehicle will gather data on the Martian atmosphere, sharing the information with 200 institutions around the world.

In October, the UAE Space Agency revealed its National Space Strategy 2030, designed to make the country “a major hub for space activities”. Goals include developing “talent and creativity among young people”, creating an “effective regulatory environment”, and turning the UAE “into the go-to destination for investors wishing to participate in the space sector”. Since being set up, the agency has established 25 co-operation agreements with commercial and state organisations, says Al Ahbabi.

The UAE Space Agency’s long-term project is its Mars 2117 initiative, the first step of which is to build a series of laboratories known as Mars Science City. These, explains Al Ahbabi, will simulate conditions on the Red Planet. The UAE’s deserts – although considerably hotter – have many conditions in common with the barren Martian surface, he says.

This year’s Dubai air show will give the UAE a chance to showcase its capabilities to visitors, and promote itself as a hub for space science. A space pavilion, hosted by the agency, will feature companies and organisations from Argentina, France, Russia, Sweden, Switzerland, Poland and Ukraine, and include two free conferences: “Women in Space” on the Monday and “Tech Talks” on Tuesday.