Croatia has confirmed that it will retain a combat fixed-wing fleet, which will include restarting a programme for the replacement of its aging Mikoyan MiG-21 bisD/UMD aircraft.

The Croatian state defence council - chaired by President Kolinda Grabar-Kitarović - confirmed the decision, and the ministry of defence is believed to be “already evaluating three possible options” to replace its MiG-21 fleet.

By the end of the year a commission that is to include members from the MoD, Croatian air force, ministry of finance and commerce and parliamentary parties is to announce its choice, and a decision is to be finalised in 2016.

Sources in Croatia claim that only western aircraft are under consideration, either new or second-hand/refurbished, and cite already speculated Saab Gripen and Lockheed Martin F-16s as the most probable contenders. 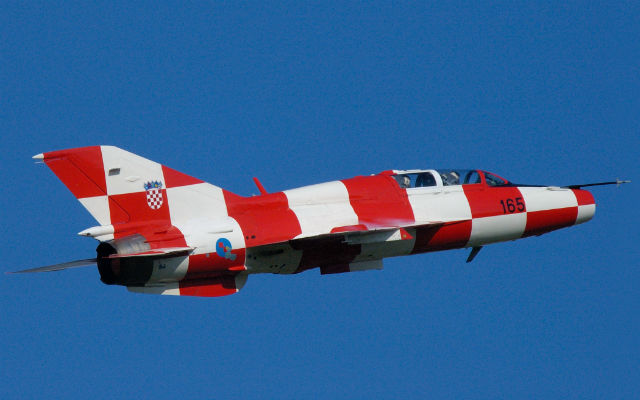 Funding is still the main drawback, so the NATO “Smart Defence” model that encourages member states to pool assets – like the Czech Republic and Hungary did in leasing the Gripen - is being considered. USA donations of used older models of the F-16 that could be modernised is another option, or alternatively ex-Royal Netherlands Air Force or Belgian air force aircraft could be an option.

If the funding shortage were more dire, secondhand Mirage 2000s, Kfirs or T-50s could be considered.

An effort to acquire a new type was halted due to a funding shortage, while 12 overhauled MiG-21bis aircraft have been delivered through Ukraine’s Ukrspecexport agency, which was brought about in order to bridge the gap in training and operations until funds are secured for a new combat type. Croatian chief of staff, Gen Drago Lovric, says that the full squadron should be fully operational by May.

Meanwhile the defence council has also informed Grabar-Kitarović on the progress of the Bell Helicopter OH-58D Kiowa acquisition. Croatian portal Defender.hr. has cited MoD sources saying that a “Croatian team is expected in May to choose 16 helicopters from US stock to be delivered”.

Croatia's air force already operates the Bell 206B – from which the OH-58 was derived – for pilot training and light transport duties.