Chinese aerospace giant AVIC has quietly advertised critical details about the accuracy and performance of a secretive project to develop a supersonic cruise missile reportedly dubbed an “aircraft carrier killer” by the launch customer.

A full list of specifications for the CM-400AKG missile was played on a loop inside the AVIC exhibit stand at the Dubai air show; a marketing venue for the JF-17 fighter jointly developed between China and Pakistan - the latter of which operates the type as the "Thunder". 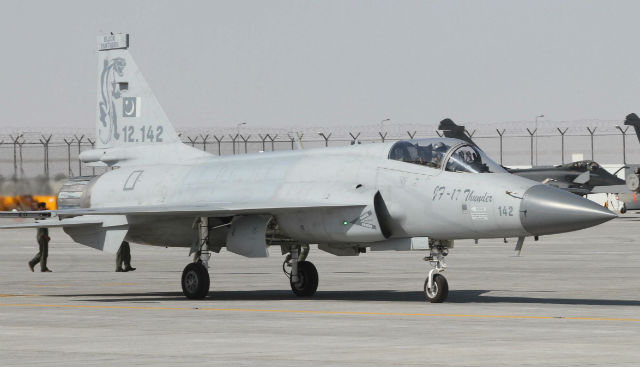 News reports have indicated the CM-400 has entered service with the Pakistan air force. The AVIC video notes vaguely that the 910kg (2,000lb) weapon “can be carried by JF-17, etc”. It is usually compared with the Indian/Russian Brahmos high-speed cruise missile.

For the first time, the AVIC video details claims for the accuracy of each of the CM-400’s three major guidance systems, starting with a 50m (164ft) circular error probable (CEP) for an inertial navigation system coupled with satellite positioning. A weapon's CEP is defined as the 50% probability that it will hit within a given radius of the target’s position.

The accuracy of the CM-400 improves by an order of magnitude - to a CEP of 5m - when an onboard infrared (IR)/TV seeker activates to provide terminal guidance. The list also claims that the CEP of the weapon actually worsens to 5-10m when an IR/TV seeker is supplemented by a passive radar during the terminal phase. It is not clear why the passive radar – identified as occupying the L, S and X bands of the electromagnetic spectrum – would not improve the CM-400’s accuracy.

A list of system features appears to confirm an unusual characteristic associated with the CM-400. Unlike most high-speed cruise missiles, which fly at low altitude to avoid detection, the CM-400 uses “high [altitude] launching” to achieve “higher aircraft survivability”, according to the video.

A fighter such as the Chengdu/Pakistan Aeronautical Complex JF-17 would launch the missile at speeds between Mach 0.7 and M0.9 at an elevation between 26,200ft and 39,400ft, according to the AVIC specifications.

News reports indicate the weapon was publicly unveiled by China at the Zhuhai air show in 2012.