Although signed on the behalf of Germany, Italy, Spain and the UK, one of the main elements of the work will be the full integration of the MBDA Brimstone 2 air-to-surface missile for the latter’s Royal Air Force. This activity will be worth £72 million ($111 million) to Eurofighter partner company BAE Systems, which completed a feasibility trial linked to the enhancement late last year. 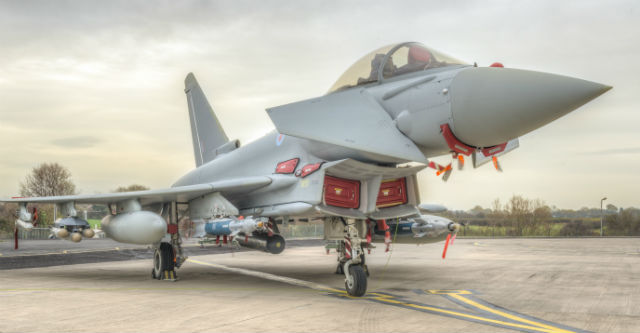 Other elements of the P3E package include avionics upgrades, improvements to the Eurofighter’s mission system and maintenance equipment and capability enhancements related to its use of other weapons. These include MBDA’s Meteor beyond visual-range air-to-air missile and standoff-range Storm Shadow cruise missile.

Full integration of the Brimstone 2 will enable the Typhoon to carry six of the weapons, which will be integrated using a pair of three-round launchers. The P3E standard is scheduled for delivery during 2017, with the upgrade “expected to be delivered into RAF service in late 2018,” the MoD says.

“Support for the contract will come from all four core nations, and the enhancement package will benefit all who use it,” says Eurofighter chief executive Alberto Gutierrez.

The Eurofighter consortium, which signed the P3E contract with the nations via the NATO Eurofighter and Tornado Management Agency at the IDEX show in Abu Dhabi on 22 March, says definition phase work is already under way for the programme’s subsequent Phase 4 capability enhancement effort.