Iraqi Airways’ first Airbus A220-300 landed in Baghdad on 9 January amid government optimism that the airline will soon be able to resume commercial flights to Europe.

The aircraft arrived at Baghdad International airport from Manchester airport in the UK, on a two-legged delivery journey that began at the airframer’s Canadian facility at Mirabel.

YI-ARE landed in Baghdad on 9 January

“The receipt of this newly-made aircraft coincides with a time when Iraqi Airways is very close to resolving the lifting of the European ban on it, which gives it enough space to enter strongly in competition with other carriers,” says Iraq’s transport minister Nasser Hussain Bandar Al-Shibli during a ceremony at Baghdad International airport.

Iraqi Airways was added to the European Commission’s airline blacklist in late 2015 because of “unaddressed safety concerns” and has remained there since. The list was last updated on 26 November 2021 and is also followed by the UK.

According to Cirium schedules data, the airline served European destinations including Copenhagen, Dusseldorf, Frankfurt, London, Malmo, Stockholm and Vienna before the ban was imposed. 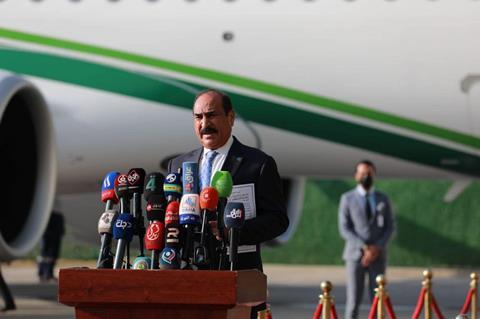 Aircraft YI-ARE is the first of five Pratt & Whitney PW1500G-powered A220-300s due to join the Middle Eastern airline’s fleet, with the date of its entry into commercial service yet to be confirmed. Each example will feature a dual-class cabin with 12 business-class seats and 120 in economy class.

In September last year the carrier said that some of its pilots had been training to operate the type with Lufthansa in Germany. 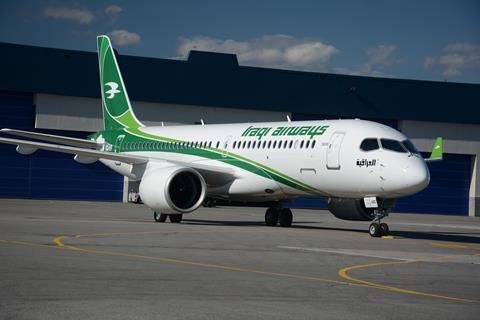 Iraqi Airways ordered the jets in 2013, when the programme was owned by Bombardier and known as the CSeries.

Alongside its incoming A220s, Iraqi Airways also has nine Boeing 787-8s and a single 787-9 on order, according to Cirium fleets data. The airline also appears set to add Boeing 737 Max aircraft; 16 of the type were among 21 narrowbodies Panasonic in November said would be line-fitted with its IFE product for the carrier, though no order is currently listed with Boeing.

Cirium data shows that 13 Boeing 737-800s dominate the carrier’s existing fleet, which further includes a range of Airbus and Boeing and types – all in the low single figures – plus six CRJs. Many of its aircraft are listed as being in storage. 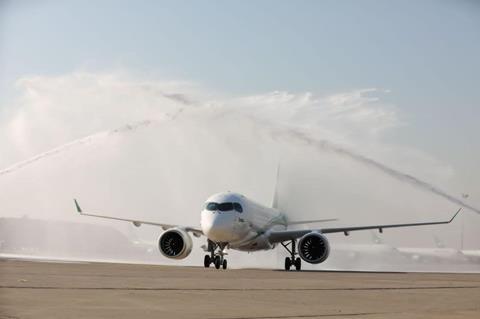 YI-ARE landed in Baghdad on 9 January