INTERVIEW: Engineering a great start to an aviation career

Being curious about how aircraft work spurred Tsungi Maruta to join the apprenticeship scheme for mechanics at British Airways, where she is also an ambassador, representing the carrier's public face

I fell in love with aircraft as a young child. Everything about them was just so fascinating and as I grew older, I developed this curiosity to find out more about how they work and how they get fixed.

What qualifications did you require to start your career?

I started a three-year apprenticeship in 2010 and the initial requirements were five GCSEs at grades A-C. After successfully passing the first year, which was spent in college developing hand skills and learning about performing engineering operations, I then joined British Airways (BA) as a full-time apprentice in 2011. The remaining two years consisted of on-the-job training over a series of rotations working on all of BA's aircraft fleet, as well as the component and engine workshops combined with day release to college. As part of my apprenticeship, I gained a Level 3 diploma in aircraft maintenance engineering as well as a national vocational qualification. 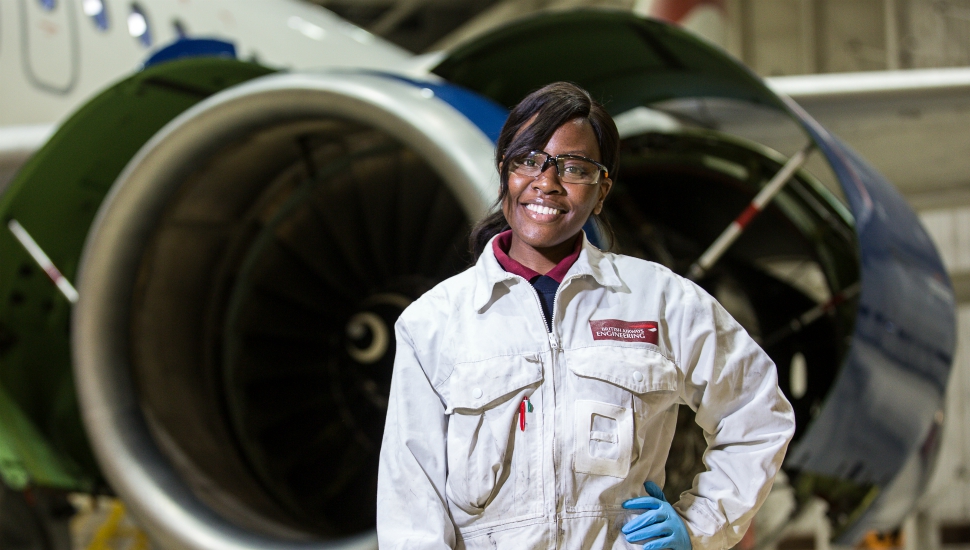 Why did you decide to become an apprentice engineer?

The BA engineering apprenticeship scheme window opened at the right time for me. I had my concerns about going to university, one of them being that it wouldn't have been as hands on as I would have liked – I just wanted to learn how to fix planes. The apprenticeship delivered on this because it was the perfect balance of theory with practical. On-the-job training really allowed me to understand, witness and adopt the great deal of expertise and knowledge that goes into keeping aircraft serviceable. I worked with and still work with highly skilled engineers who are supportive and passionate about what they do. The apprenticeship scheme is a great start to a career in aviation.

As a mechanic, I help inspect, maintain and modify the airline's new long-haul fleet of Airbus A380s and Boeing 787 Dreamliners. I feel very lucky to be working on these next-generation aircraft and I'm very excited for the arrival of our A350 in July. Every day is different, and this is one of the things I love about my job. It is so varied, from being part of a team changing an engine to carrying out routine servicing. Safety is at the core of everything we do, that of our customers, aircraft, colleagues – everyone. I'm proud to play a part in maintaining our fleet of 300 aircraft, enabling a safe and efficient airline operation.

What do you enjoy most about your role?

I enjoy the end result when after maintenance, an aircraft is declared serviceable. Knowing that I've had an input into a safe aircraft and thus allowing people to travel makes it worth it for me. Also, being passionate about planes, I love the fact that I'm up close with the aircraft and get to see them in a different light. I've also made some life-long friends in my job, so it's an added bonus to work with nice people.

I'm also a BA Ambassador, which is a team of colleagues from all areas of the company representing the airline at a wide variety of events. This gives me a great opportunity to learn more about the company and engage with people – they're always interested to hear I'm an aircraft mechanic and have loads of questions, which is great.

What challenges do you face?

Being that I work in a flexible area, each day is different and provides a challenge in its own right – which is something I enjoy and thrive on. AOG (aircraft on ground) situations as they arise present a challenge as they're unplanned and could be anything. Whatever the challenges, though, it is always more rewarding when we resolve the issue as a result of planning, teamwork, training and hard work.

What measures are needed to encourage more women to pursue a career in engineering?

I think visibility is crucial in challenging whatever stereotypes exist about being a female engineer. I think anyone would benefit from having a role model to look up to and say: “Well, if she's done it then I can too," and sometimes I do think this is what is necessary – to have recognised role models. As a traditionally male-dominated field, I think there are many misconceptions about what it's like and I just want to encourage girls and women to believe in themselves because they can do it. It's about having the passion, determination, drive and skills that counts. Last year, BA hosted an event for Women in Engineering day, which I took part in. It was so inspiring to be surrounded by female engineers from different organisations and to have that platform to be able to share our experiences. It was a true display of how diverse engineering is – in attendance were technical engineers, powerplant engineers, structural engineers and more. There are plenty of options and opportunities available within aviation.

What's your next career move?

I have nearly completed the modules necessary to gain a European Union Aviation Safety Agency B1 aircraft maintenance licence and when I get my licence, the next step will be a type course, hopefully on the 787 or A380. My ultimate career goal, though, is to become a commercial airline pilot and I hope my background in engineering will stand me in good stead when the time and opportunity comes.