A NASA-led team is about to embark on a new round of testing to validate technologies deemed necessary to support the US Federal Aviation Administration’s integration of unmanned air vehicles into national airspace (NAS).

NASA’s General Atomics Aeronautical Systems Ikhana UAV will be used for the two-month test campaign, during which 15 flights and 270 encounters of the UAV with manned “intruder” aircraft will be carried out to test the detect and avoid (DAA) systems carried by Ikhana.

Intruder aircraft to fly near the MQ-9 Predator-derived Ikhana during the tests will include NASA’s Beechcraft B200 King Air and T-34C, plus its Gulfstream GIII and Honeywell-owned C90 King Air. Additionally, a US Air Force Beechcraft C-12 King Air will also be used.

“These intruders will function as high-speed and low-speed aircraft to verify and validate the requirements of the minimal operational performance standards for UAS [unmanned air systems],” NASA says.

The testing will be the fourth round – flight-test series 4 (FT4) – under the airspace integration project, and is set to take place from the end of April until June at NASA’s Armstrong Flight Research Center in California. Partners include General Atomics, Honeywell and the RTCA special committee. 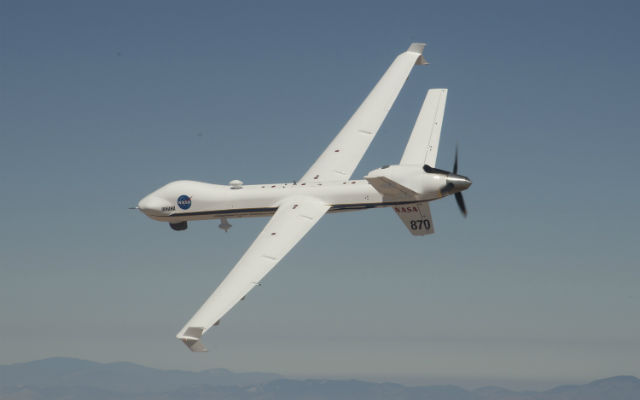 The intruders will act as both co-operative and non co-operative aircraft, with some transmitting their whereabouts using a transponder registered by the UAV and others not transmitting, in order to evaluate the DAA system’s radar.

“Our engineers have generated a very detailed and complex flight-test plan that integrates all of the variables needed to execute this flight test,” says Heather Maliska, UAS-NAS deputy project manager at Armstrong.

“This flight-test plan co-ordinates the DAA systems, intruder aircraft equipment and speeds, design of encounter geometries, and the number of intruder aircraft needed to conduct the encounter in order to meet NASA’s and the community’s requirements.”

Ground testing ahead of the campaign is under way and engineers are validating the DAA system's software.

FT4 expands the previous trial phase that took place in June, which lasted just two days and only involved the Ikhana encountering the intruder C90. It was the first time all the different elements of the DAA system were tested together. Ikhana had been integrated with an updated sense-and-avoid system, and included a new traffic-collision avoidance element and advanced software developed by Honeywell.

“NASA is providing critical data to support the ongoing efforts to develop technical standards for both sensor data links”, Paul McDuffee, co-chair of RTCA’s Special Committee 228, adds. “The UAS community looks forward to the results of this historic flight-test campaign.”