Boeing in September ramped up its aircraft deliveries and logged a solid month of orders, handing over 51 jets, including seven 787s, to customers during the month.

The 787 deliveries are the most in one month that Boeing has moved in two years, coming after the company started re-delivering the type in August following a pause due to manufacturing quality issues.

The company in September landed new orders for 96 jets, including for 51 737 Max and for 45 widebody aircraft, the manufacturer says on 11 October. 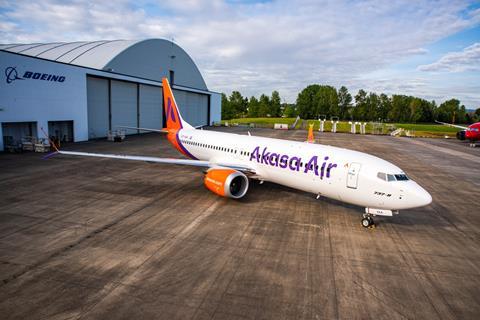 Indian carrier Akasa dropped a commitment for five 737 Max jets, transferring the orders to a lessor under which it will still take the aircraft through a sale-and-leaseback arrangement

The cancellations included one 787-9 nixed by an unnamed customer and five 737 Max scrubbed by India’s Akasa Air. The airline transferred the orders to a lessor and still intends to operate them under sale-and-leaseback deals, Boeing says.

The manufacturer delivered 51 aircraft in September, up from 35 one month earlier.

The deliveries included three 787-8s to American Airlines, one 787-9 to Japan’s ANA (via a deal with lessor Atlantis Aviation), one 787-9 to WestJet and one 787-10 each to British Airways and United Airlines. The USAF took three KC-46s, while FedEx Express and Maersk Aviation each received one 767-300 Freighter. Boeing also delivered one 777F each to FedEx and CES Leasing – China Cargo Airlines will operate the jets delivered to CES.

Year-to-date, the company had received orders for 542 jets, logged 114 cancellations and delivered 328 aircraft.