Turkish missile maker Roketsan is hoping to fly its SOM-J cruise missile for the first time “possibly late next year” ahead of planned integration with the F-16 Block 40 by 2018 and the Lockheed Martin F-35 sometime later.

SOM-J is essentially a scaled-down version of Roketsan’s SOM (stand off missile), and sized for internal carriage on the F-35. SOM is already integrated with Turkey’s F-16 Block 40 and F-4E fighter jets, whereas the semi-armour-piercing SOM-J will become the nation’s cruise missile of choice once Ankara introduces the low-observable F-35 into its combat force.

One company official, who spoke to Flightglobal at a recent US Army conference in Washington but declined to be named, says most of the SOM subsystems including the multi-mode seeker have already been tested and qualified and the new development effort its mostly about adapting the missile for internal carriage on the F-35, such as changing the outer mould line.

He says the first flight could happen as soon as late 2016, and Turkey has requested integration with the F-35 as part of the planned Block 4.2 modernisation package. “We rely on our experience and our qualification results we already have with the existing system,” he says. “This is based on the existing design.” 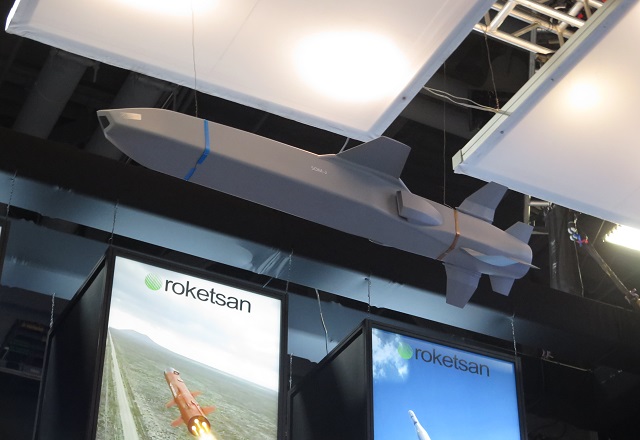 SOM-J was on display at Roketsan’s booth during the Association of the United States Army (AUSA) convention in Washington earlier this month.

Roketsan recently formalised a partnership with Orlando, Florida-based Lockheed Martin Missiles and Fire Control for development and marketing of the SOM-J configuration. In September, one Lockheed official forecast first flight “by 2017” – a more conservative estimate.

SOM-J will be assembled in Ankara and is being pitched to other F-35 users, but the primary customer is the Turkish air force. Compared to SOM, SOM-J’s missile body and payload have been downsized, but its range of more than 100nm is similar, Roketsan says.

“We’re using the existing seeker,” he says. “Our important point or catch point is: this system is already qualified. All the subsystems and our industrial base, materials, and acquisition system – it’s all settled. It’s in the inventory of the Turkish armed forces.”

Roketsan says in a product brochure that SOM-J will enter service in 2018. Once complete, SOM-J will compete against Norway’s Kongsberg Joint Strike Missile on the F-35 weapons market.

F-35 joint programme office head Lt Gen Christopher Bogdan says there will be equal opportunity for weapons integration through the Lightning II Block 4-series modernisation, but the timing depends on the weapon’s maturity and integration readiness, and it must fit correctly.

“If the weapons bay has to be redesigned to accommodate [new] weapons, we’ll only be redesigning it one time,” Bogdan told reporters after the Norwegian F-35 rollout ceremony in Texas last month.