The US Air Force is breathing new life into an effort to upgrade the radar systems in its fleet of Boeing B-52H bombers initially announced four years ago.

The Air Force Life Cycle Management Center (AFLCMC) on 23 September announced it was seeking technical, performance and cost information for radar systems to replace the Northrop Grumman APQ-166 strategic radars first fielded in the 1950s and most recently upgraded in the 1980s.

The request for information (RFI) will inform a formal analysis of alternatives (AoA) of radar modernisation options for the B-52H fleet in 2020 and beyond, called the strategic radar replacement (SRR) programme. 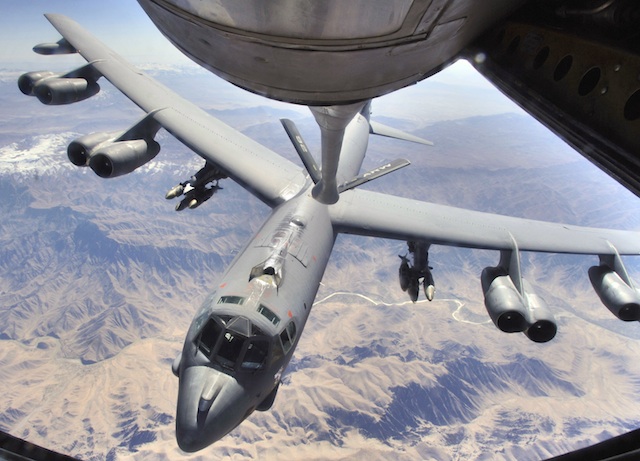 Photo courtesy of US Air Force

“The overall AoA objective is to inform decision makers about the cost-effectiveness, risk, and military worth of RMP alternatives,” the document states.

Not including spare radars, the service needs to retrofit 76 B-52Hs with the new system. The RFI does not defined necessary upgrades for training aircraft. Initial production kit deliveries will begin around fiscal year 2022 until all aircraft are retrofitted. The RFI specifies a retrofit rate of between 17 and 24 aircraft per year.

A nearly identical RFI for the B-52H radar modernisation programme (RMP) was released in May 2010. Neither document makes mention of advanced electronically scanned array (AESA) technology that is now available off the shelf and was the system chosen for upgrades to the Northrop B-2A bomber fleet. The air force had plans to launch the development in late FY2013, following an analysis of alternatives phase and a competitive contract selection. It then cancelled funding for the radar upgrade in its fiscal 2013 budget in favour of “higher priority” line items, says a US House of Representatives Armed Services Committee report on the 2014 National Defense Authorization Act (NDAA).

“The RMP will replace the AN/APQ-166 radar installed on the B-52H with a fully supportable system that maintains all current B-52H mission functions, incorporates the additional capabilities of ground moving target indicator/moving target track, surface target search/surface target track and electronic protection, and provide a growth path for new and enhanced capabilities,” the RFI states.

The NDAA report notes that the B-52’s radar has undergone upgrades but parts such as the antenna reflector, feed and casting are original and need to be upgraded to keep the radar relevant through the end of the B-52’s service life in 2040, which could be prohibitively expensive.

“Although sustainable through the current service life of the B-52, the legacy radar system mean-time-between-failure continues to degrade and sustainment costs are expected to significantly increase after 2017,” the report says.

“The committee encourages the Secretary of the Air Force to develop and implement an affordability strategy for maintaining radar capability on the B-52 aircraft through its predicted service-life of 2040.”