No probable cause emerged from the investigation of a 3 July train derailment that destroyed six almost complete Boeing 737 fuselages, but simulations pointed to the possibility of a track misalignment problem, Montana Rail Link says.

The Missoula, Montana-based private rail company investigated other possible causes for the derailment, but simulations of the incident “suggest” the cause was a track geometry issue. Asked to elaborate on the meaning of “track geometry”, a Montana Rail Link spokesman says that a geometry issue “includes track alignment”.

A FRA web site says track geometry problems are a known hazard in the rail business.

“Heavy freight trains can cause degradation of track geometry in several dimensional parameters. This degradation can be a function not only of axle loading and speed, but also of sub-grade characteristics together with the tracking behavior of the trucks that support the railroad car,” the FRA says.

Montana Rail Link did not provide any specific actions taken to prevent a similar train derailment, but says the company “has rigorous track inspection policies in place and invests millions of dollars in track maintenance annually”. 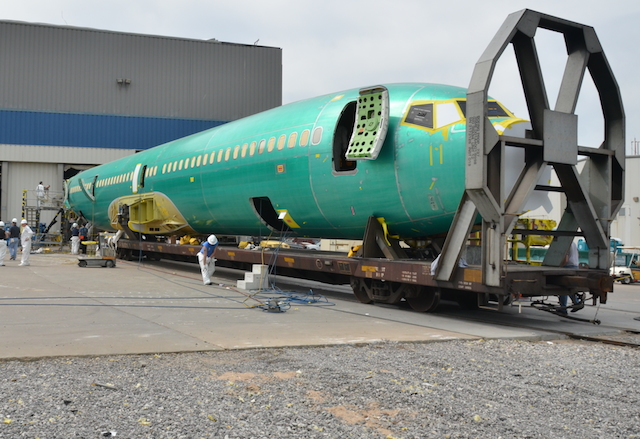 In the 3 July derailment, three intact 737 fuselages dislodged from the train cars and plunged down a steep bank into the Clark Fork River in a remote section of the Montana wilderness. Another three 737 fuselages on the train also were declared a total loss and scrapped.

Boeing’s supply chain relies on the US rail system to ship fuselages between Spirit AeroSystems in Wichita, Kansas, to Renton, Washington, where Boeing employee attach the wings, landing gear, systems and interiors.

The 1,560nm (2,890km) train journey from Wichita passes over the Rocky Mountains and some of the USA’s most remote territory, but besides the 3 July derailment it has been remarkably predictable. Only one previous derailment involving a train carrying 737 fuselages is recorded, and it was caused by a tornado.

“We have had a good partnership across the supply chain to identify and mitigate future risk,” Boeing says.

Boeing resumed shipping the 737 fuselages to Renton by train shortly after derailment. The company’s full-year guidance for aircraft deliveries has not wavered since the crash.

Boeing is building the 737 family at a rate of 42 aircraft per month. The production rate is scheduled to rise to 47 per month in 2017 and 52 per month in 2018, while Boeing introduces the re-engined 737 Max into service in