Air France-KLM is in talks on how it might retain co-operation with European joint-venture partner Alitalia after the Italian carrier gave notice of plans to walk away from their existing deal.

The Franco-Dutch airline says it is "holding discussions with Alitalia to see how the group can co-operate in the future in Europe", adding that the current agreement applies until January 2017.

It also stresses that Alitalia's announcement has "nothing to do" with the transatlantic joint venture between Delta Air Lines, Air France-KLM and Alitalia, which the Italian carrier joined in 2010 and which runs until April 2022.

Alitalia has been a long-standing partner of Air France-KLM. Already partners in SkyTeam, Alitalia linked with Air France in 2002 with a small cross-equity agreement which underscored a joint venture between the two on Franco-Italian routes.

That co-operation intensified when Air France-KLM acquired a 25% stake in the Italian carrier to become its prime strategic partner as part of Alitalia's relaunch as a private carrier in 2009.

But Alitalia yesterday went public with its intention not to continue its partnership agreement and ancillary joint-venture deals with Air France-KLM when they are due for renewal in 2017.

"These agreements are no longer beneficial [to us], either commercially or strategically," says Alitalia chief executive Silvano Cassano. "They were negotiated when Alitalia was in a very different position, with the result that the agreements, in their current forms, favour the other party."

The old Alitalia was being led by an administrator under the country's bankruptcy protection rules during the second half of 2008 when Air France-KLM stepped forward as a key investor.

While the Italian carrier later found itself back in familiar financial difficulty, the big change in its circumstances is the presence of Etihad Airways as a key shareholder. In August 2014, the Gulf carrier helped rescue the carrier after agreeing to acquire a 49% stake in the airline, part of a wider capital investment of €1.76 billion ($2.36 billion, then) in the Italian flag carrier. That also included contributions from existing Alitalia shareholders. Notably, those did not include Air France-KLM, which as a result saw its stake in Alitalia dwindle to barely 1%.

What is unclear is the extent to which Alitalia's stance reflects a change in its partnership strategy under its new shareholder or an attempt to renegotiate terms of the existing deal. Given the heightened strains around European and US carrier relations with the big Gulf airlines, it would be easy to view this as another pressure point. But the extended notice it has given – leaving at least 18 months to salvage co-operation before they expire – and Cassano's comments suggest it could be part of the Italian carrier's bargaining position.

Cassano says Alitalia is "willing to discuss more equitable arrangements", adding: "We remain open to further discussions to achieve a mutually acceptable solution. However, in the interest of transparency and certainty for all parties, we felt it necessary to announce our intention not to renew these agreements under the present conditions."

Both Air France and KLM already codeshare with Etihad. Last month, during Air France-KLM's first-quarter results call, finance chief Pierre-Francois Riolacci sought to play down wider tensions among European and US carriers with their Gulf rivals, noting that the carrier was holding "different" talks with Etihad about potential avenues of further co-operation.

The existing joint venture covers a string of routes linking Italy with the French and Dutch markets. Data from Flightglobal's FlightMaps Analytics shows that the scope of current connections between Italy and the two countries operated by the three carriers. Over half the capacity, in terms of seats, is offered on the four biggest routes: those linking Rome and Milan to Paris and Amsterdam. Rome-Paris is the biggest route, with Alitalia and Air France both offering six daily return flights.

Overall, the carriers operate on 20 routes linking Italy with France and the Netherlands.

Carrier route network linking Italy with France and the Netherlands: May 2015 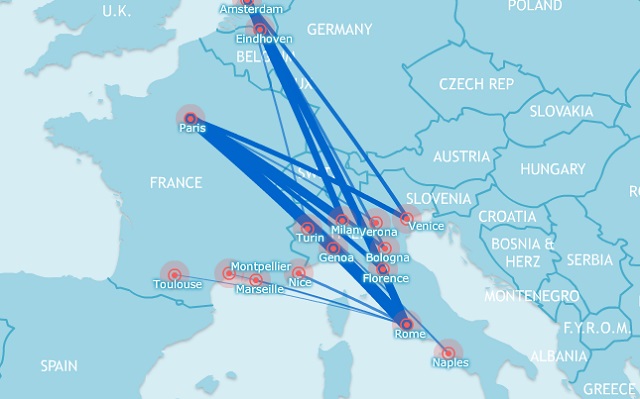 Aiming to break even in 2016, Alitalia is working on building business as a premium network carrier with a focus on long-haul services. The Italian flag carrier wants to build up Milan's Malpensa airport as a long-haul hub – in addition to Rome – while the northern city's Linate gateway serves travellers to European destinations. It is pursuing increased co-operation with Etihad's European partners, last winter deepening its codeshare with Air Berlin, as a means of building up the network throughout the continent.