Delta Air Lines debuts its first Airbus A321 tomorrow, its 19th mainline fleet type as it continues to shift its fleet towards larger gauge aircraft.

The Atlanta-based SkyTeam Alliance carrier has earmarked the aircraft for short- to medium-haul high-density routes, like the Atlanta-Orlando route that it introduces is first A321, registration N301DN and MSN 6923, a day late on 3 May. 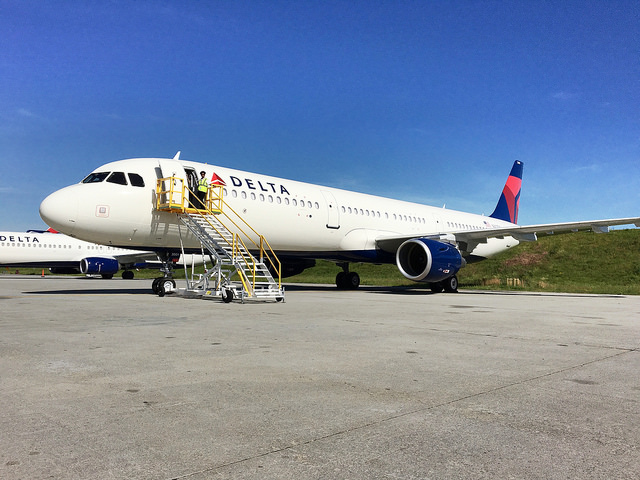 “We hope to retire the MD-88 fleet by the end of the decade,” said Ed Bastian, Delta’s new chief executive, at a media event at its headquarters the same day. “The A321s are going to be a component of that.”

Asked about the 43 additional seats on the A321 compared to the MD-88, he says: “Upgauging has been a big part of the success of Delta over the past five years, not just from the regionals to the mainline but within the mainline as well.”

“Maybe there’s a few less shells with the upgauge depending on the market conditions at the time,” Bastian adds.

Delta has led the US industry in fleet upgauging. In 2012, it was the first carrier to sign an agreement with its pilots allowing a significant reduction in its 50-seat regional jet fleet in exchange for the addition of 88 Boeing 717-200s to its mainline fleet and up to 70 76-seat jets to its feeder fleet.

Both American Airlines and United Airlines have followed suit, signing similar deals with their pilots and beginning their own fleet upgauging programmes.

Greg May, senior vice-president of supply chain management and fleet strategy at Delta, said the A321 burns fuel about 28% more efficiently than an MD-88 at the media event. The aircraft is about 30% more efficient than the Boeing narrowbody when maintenance costs are included, he added.

Delta may still use other aircraft types to replace MD-88s. For example, some of the 64 Boeing 737-900ERs that Delta had on order at the end of March may be used, says Bastian.

“While the CS100 not likely to be part of the MD-88 retirement plan given that’s 110 seats and we’re not looking to downgauge the airline, we do have firm options on the CS300,” he says referring to the order for 75 firm and 50 options for the CS100 with conversion rights that Delta placed on 28 April.

While Bastian only says that Delta is “very interested” in the CS300, executive chairman and former chief executive Richard Anderson told reporters on 28 April that they “are” going to take the CS300.

Delta can take CS300s from its 36th CSeries aircraft delivery, says May. It would be configured with around 132 seats.

A321s will arrive from Hamburg until the 11th or 12th aircraft, when Delta will take its first of the type from Airbus’ new final assembly line in Mobile, Alabama, said Shaun Londono, project manager for the A321 at Delta, onboard N301DN at one Delta’s hangars at Hartsfield-Jackson Atlanta International airport. This is likely to occur in November.

The airline will take A321s from both Mobile and Hamburg for the next few years, he says.

Price played a big role in Delta’s decision to order more A321s, as it has in numerous past deals.

Delta has no orders for either of the next generation Airbus A320neo family or Boeing 737 Max family.

The carrier is likely paying around $40 million or lower per A321, estimated Moody’s Investors Service in a report on 29 April.