European and Asian ministers met this week in Singapore for talks that could eventually lead to the creation of what EU transport commissioner Siim Kallas describes as “an essential missing link” – an open-skies agreement between the EU and the Association of Southeast Asian Nations (ASEAN).

Opening the first ever EU-ASEAN Aviation Summit, Kallas said such a bloc-to-bloc agreement would not only boost air traffic between the two continents significantly, but would also head off the “very significant and growing part of the incremental market growth [that] is being diverted through hubs in other regions”.

The crucial questions are: to what extend would an open-skies deal actually boost direct traffic between the two continents, and how much of a threat are the Middle Eastern hubs?

Olivier Jankovec, ACI Europe’s director general, is enthusiastic about the potential benefits of such an agreement. “Liberalising aviation between the EU and ASEAN is not just about normalisation: it is about upping our game in response to increasing competitive pressures from other regions. It is about boosting our own position as global aviation hubs,” he said during the summit.

ACI Europe points to the traffic boost that occurred after Morocco joined the European Common Aviation Area in 2006, with traffic growing 22% the following year and numerous new operators entering the market, European Commission data showed. Israel is now joining the scheme and the Ukraine is also set to be added.

The airports body is expecting traffic to grow significantly in both continents over the coming 15 years, with Europe outperforming the USA while Asia sees passenger traffic grow to almost the same level as that of Europe and the USA combined. 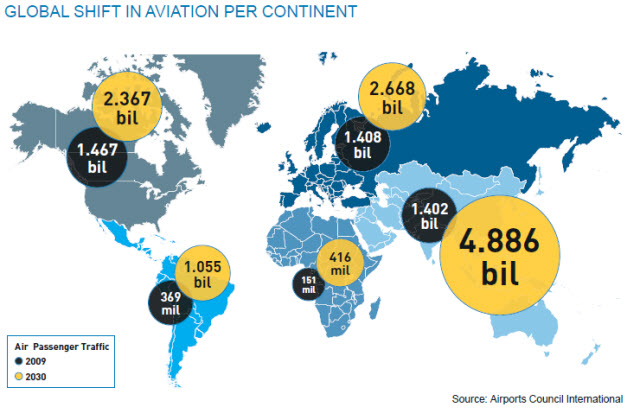 But Peter Morris, chief economist with Flightglobal’s advisory service Ascend, is more cautious about the impact such an agreement would bring and believes commercial factors outweigh regulatory regimes in dictating traffic trends.

“Open skies and deregulation have the maximum impact in large markets where restrictions on capacity effectively deter entry by new competitors and, secondly, they do not encourage airlines on routes to compete with each other as there is ‘enough for all’,” he says.

“At the moment, there seems to be about 20,000 daily seats each way between western Europe and those countries. Of these, Singapore Airlines accounts for 25%, and the European airlines including Turkish Airlines account for just under 40% of capacity. The European airlines seem to have no regulatory problem serving those country markets – it is more the traffic/yield equation that is important at the moment,” adds Morris. 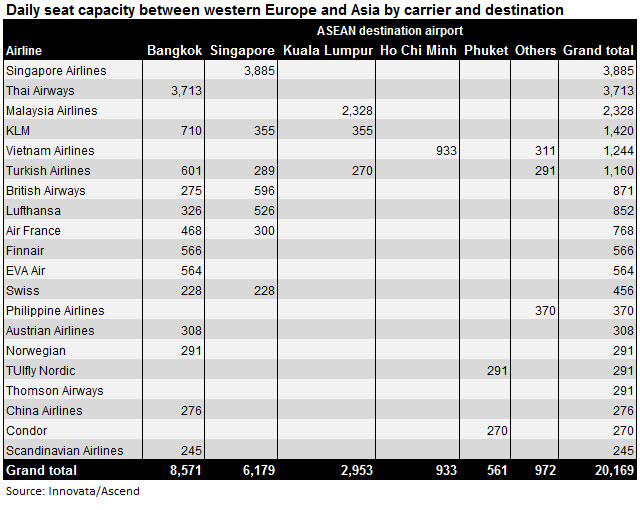 “My thoughts are that the three major markets to Europe from ASEAN are already pretty open to competition in markets such as Singapore, Malaysia and Thailand. The other ASEAN countries currently have much smaller direct markets to Europe, partly because many of them, such as the Philippines, currently funnel through the three hubs, with an excellent choice of services from airlines at both ends of the route. I struggle to see that there would be many additional services from either end of the route from Singapore, Bangkok or Kuala Lumpur to Europe.”

Ian Giles, a competition lawyer with Norton Rose Fulbright, says any such agreement could give cross-continental traffic a boost but other restrictions would still apply in both markets.

“Open skies in many ways is policy-driven in line with the EU’s general support for liberalisation of markets and competition. However, the EU-US open-skies situation has shown that commercial decisions on route operations are not transformed by open skies alone. EU-ASEAN open skies also improves the possibility of inter-continental airline consolidation, but hurdles in terms of national ownership restrictions remain.

“The EU is very aware of the competition its carriers face from Middle East carriers, and continues to explore whether there are ways of penalising them in respect of any state support they receive. An EU-ASEAN open skies has the potential to open up direct and one-stop routings between the EU and Asia, but will not of itself make it easier for EU carriers to compete with Middle East carriers – and EU carriers’ concerns about ensuring a level playing field in that respect will continue.”

John Strickland of JLS Consulting believes any new agreement could be significant in its ability to open up new markets, and that the arrival of more fuel-efficient, long-range aircraft makes such an agreement all the more relevant.

“You need to have the right aircraft to operate in the market profitably and if you take an airline such as British Airways they are keen to bolster connections to Asia. New aircraft such as Airbus A350 and the Boeing 787 will allow airlines to operate long-haul direct routes more profitably. As Bjorn Kjos, chief executive of Norwegian, says – he sees huge demand from travel from Asia to Europe as the Asian middle classes grow.

“If you take Air Asia X’s decision to halt its service to Gatwick in 2012, it was because it lacked significant feed at the London end of the route. It was also operating a fuel-inefficient four-engine Airbus A340 on the route.”

Strickland points to the US-EU open-skies agreement signed in 2008, which he says led to a “dramatic growth in traffic” despite the constraints imposed by congested airports. These in turn led to a thriving trade in slots at hub airports such as London Heathrow as demand increased.

“All the elements need to be in place: airport infrastructure, a willingness among airlines to operate the routes, the right aircraft to do so profitably and the air service agreements between groups of countries to provide a liberal regulatory backdrop.”