GE Aviation has spent decades building a reputation as a materials trailblazer in the engines business.

Despite this reliable track record, industry peers still seemed caught off guard and unguardedly sceptical about GE’s sudden and deep plunge into the emerging world of additive manufacturing. Like the widespread introduction of composite materials in the 1990s, additive manufacturing inserts both new materials and a new production process far removed from industrial age practices like forging and casting.

The speed and scale of GE’s embrace of 3D printed parts seems unprecedented. It took the industry decades of experimentation before allowing composite materials to be used in load-bearing structures, starting with the rudder of the Airbus A310 and increasing gradually over the next four decades.

Even as most aerospace companies still limit 3D printers to rapid prototyping shops and one-off plastic components, GE is opening a 9,290m2 (100,000ft2) factory in Alabama to produce a key component in every CFM International Leap engine, with annual production of up to 40,000 pieces a year. The same factory and another facility recently erected in Italy also could produce an even more numerous part on the GE9X, GE’s highly prized power source for the Boeing 777X family. 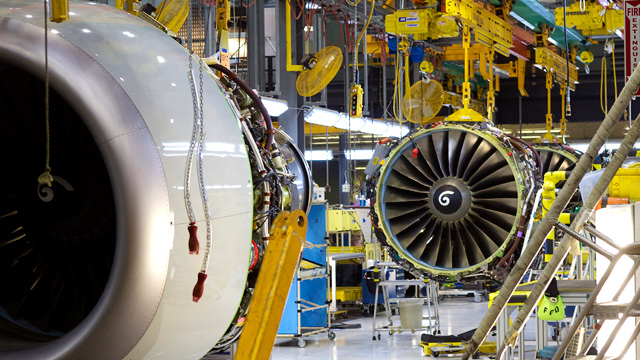 Most aerospace industry officials agree that additive manufacturing will be revolutionary, but not for at least 20 years. GE is revolutionising its manufacturing system now, with billions of orders at stake on every Boeing 737, Comac C919 and CFM-powered Airbus A320 in the backlog.

Although it appeared that GE emerged as the industry’s lonely champion of additive manufacturing overnight, the real story unfolded over several decades, with a starring role played by an industrial neighbour in Cincinnati with no background in the aerospace manufacturing business.

Greg Morris comes from a Cincinnati family that presided over a large steel distribution company since the mid-19th century. The family business was sold, however, in the early 1990s, leaving Morris with plenty of capital and nothing to do.

Over the next 20 years, the company he founded with two others – Morris Technologies – would help transform additive manufacturing from a niche technique to make one-off prototypes into a mainstream production system for some of the world’s most advanced aircraft engines.

Morris Technologies began in 1994 with the acquisition of a 3D Systems SLA-250, the first 3D laser printer on the market. The system was advanced for its time, but still limited to building fragile materials.

“At that point the resins were okay but they not robust at all,” Morris says. “In fact, you could drop it from here to the table and it would likely break.”

Despite the limitations, such early 3D printers transformed rapid prototyping operations. For the first time, an engineer with a 3D computer-aided design (CAD) drawing could make parts from scratch within hours, without the need to order raw materials, invest in new tooling and tie up machinists.

Not only would such a system have to precisely manufacture thousands of parts with close tolerances reliably and affordably, the machines would also need to monitor themselves, alerting operators of anything unexpected. Ideally, the machine would sense small fluctuations in the power supply to the laser, or perhaps minute changes in atmospheric pressure inside the printing chamber.

Obtaining machines with such potential became possible about a decade ago, but only with significant alterations. On a visit in 2003 to a UK facility of a key client – Cincinnati-based Proctor & Gamble – Morris discovered the direct metal laser sintering machine made by Munich-based EOS.

At the time, Morris Technologies was still a start-up company with a broad range of clients spanning GE’s rapid prototyping shop, medical devices and consumer products. Buying the EOS machine, however, was still a big risk. Their intention was to acquire the machine and modify it substantially to suit a more sophisticated clientele, and thereby void the warranty and the guarantee for EOS support on the machine.

“We went over to Germany, we researched it and then we took the plunge,” Morris recalls.

That decision would set in motion a path to make highly sophisticated direct parts using exotic metals, such as the cobalt-chromium discs at the base of an engine fuel nozzle, where tiny perforations and channels blend kerosene and highly compressed air in a precisely calibrated mixture before it is ignited in the combustion chamber.

By 2005, Morris Technologies had upgraded the direct laser sintering machine from a carbon dioxide-based laser to a fibre-optic laser. The more powerful laser allowed the company to start working with more exotic metals, including cobalt-chromium, Inconel 718, Inconel 626 and various titanium and aluminium alloys.

Other manufactures are using 3D printed parts as support structures in engines, such as brackets. It is also commonly used for serpentine-like ventilation ducts in aircraft. Some industry officials, such as Pratt & Whitney vice-president of technology and environment Alan Epstein, have challenged the “hype” over additive manufacturing techniques, arguing that the technology will not be ready for widespread application for another 20 years.

But Morris argues that the naysayers simply have not been working on the technology as long or made the same investments in improving the commercially available machines.

“It’s very expensive. It takes millions of dollars to develop your material curves,” Morris says. “We have probably a much better understanding of the technology and the material characteristics than others who have either gone down that road or haven’t been playing with the technology as long as we have.”

In 2012, GE acquired Morris Technologies shortly after revealing that each of the 19 fuel nozzles inside each Leap engine would be manufactured with a cobalt-chrome tip.

The design of a fuel nozzle made by the Morris Technologies machines presented challenges. Engineers assessed a “debit” on the low- and high-cycle fatigue properties of the original part, a characteristic caused by using laser sintering to produce it, rather than a casting.

“What our engineers and designers did is they designed around that debit, and that’s the beauty of what you can do with this technology,” Morris says. “Instead of letting a debit… cause a roadblock they simply designed around it.”

If GE’s strategy works, this is only the beginning. Additive manufacturing opens doors to more than just new designs and new materials, Morris says. It also allows GE’s engineers to design something like a turbine blade very differently, with several layers of material optimised for their location on the blade. Right now, a turbine blade is made with a single material, even though blending different materials could be more effective.

“What if in a high-pressure turbine blade instead of it being one material I can vary my materials in the future, and I can use one material here, blend in the next material and at the tip I get an abrasion resistant material,” Morris says. “That’s coming. That’s work that GE is on the leading edge of understanding fundamentally how to do.”