A Boeing 747-400F operated by South Korea's Asiana Airlines is missing in the sea off the country's Jeju Island.

The aircraft, with the registration HL-7604 (pictured below), took off on a regular cargo service from Seoul's Incheon airport to Shanghai Pudong airport in China at 03:05h local time. Around one hour later, some 76nm (140km) from Jeju, the crew reported "mechanical difficulties" and attempted to divert to Jeju's airport, said an Asiana spokesman.

Shortly after, radio contact was lost and the aircraft disappeared from radars. Asiana officials informed the South Korean coast guard, who deployed ships to the sea off Jeju to investigate. 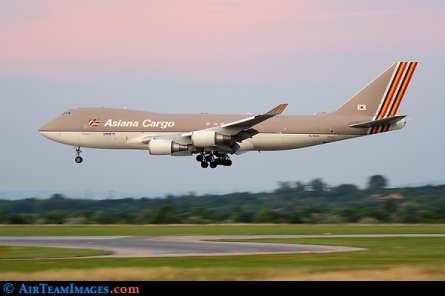 "We are still waiting for a report from the coast guard and our staff," said the spokesman. "Some debris and oil has been spotted floating in the sea, but the aircraft has not been found yet."

The spokesman said that there were two crew, a pilot and co-pilot, in the missing aircraft.

The airframe was built in 2006 and has clocked 26,300h, as shown in Flightglobal's ACAS data. The aircraft is powered by four GE CF6-80C2 engines.