The US Air Force appears to have no room for Aurora Flight Sciences’ long-endurance Orion unmanned aerial vehicle in its inventory, despite the aircraft successfully demonstrating 80 hours of endurance in a world-record flight last December.

The aircraft is designed to operate for 120 hours (five days) and recently completed its flight demonstration programme. It is now sitting idle in an Aurora hangar with no mission and little hope of being fielded by the air force after five years of development.

The demonstrator aircraft entered development with the Pentagon in 2010 and the project was transferred to the air force’s Big Safari office in 2011 for further technology maturation.

Aurora says the aircraft is capable of flying for 120h with a 454kg (1,000lb) payload, and the company was eager for the air force to adopt it as a persistent surveillance or communications relay asset – but to no avail. 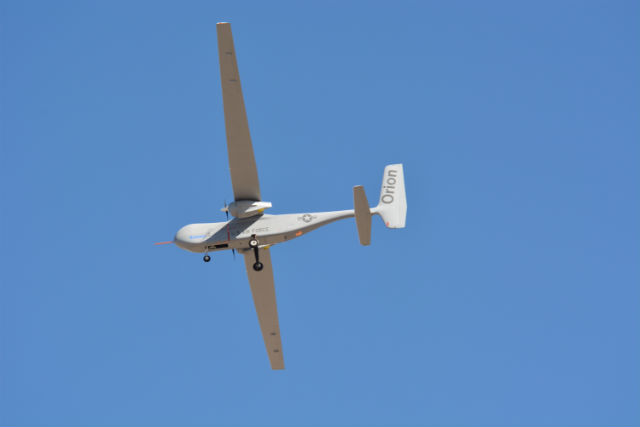 According to air force deputy chief of staff for ISR, Lt Gen Robert Otto, there is currently no operational requirement for a multi-day, long-endurance unmanned aircraft, despite an overworked General Atomics Aeronautical Systems MQ-1 and MQ-9 force and insatiable demand for surveillance products from the war-fighting US combatant commands.

“I don’t see us in the current fiscal environment wanting to invest in that to bring it forward,” Otto tells Flightglobal. “Next year it may be something different. Next year, US Africa Command might look at it and say it’s a [joint urgent operational need] that would change that answer.”

Otto doesn’t see the aircraft becoming part of the regular inventory without that demand signal.

When considered holistically, Otto says the introduction of a long-endurance UAV doesn’t make sense at a time of constrained defence spending.

Orion has a 40m (132ft) wingspan and Otto says it wouldn’t fit in many of the air force’s existing UAV hangars, and then there the issue of payload and speed constraints.

Long-range UAVs don’t have the speed, payload or weapons capability of the MQ-9, he says, and those attributes need to be “massaged” before the aircraft’s introduction would make sense.

Aurora has been pitching Orion to different customers for various missions, and might look internationally for opportunities to bring the aircraft into service.

The company sees an enduring operational requirement for long-range ISR on the African continent and is also pitching Orion as a long-range maritime patrol aircraft.