BAE touts APKWS for IS battle

BAE Systems is touting the incorporation of its precision rocket guided system into the US Air Force’s fixed-wing inventory, where it could be utilised in the fight against Islamic State militants.

The Advanced Precision Kill Weapon System (APKWS) is currently used on some of the US Marine Corps’ rotary platforms – the Bell UH-1Y Venoms and AH-1W Cobras – but BAE says it could be optimised for fixed-wing aircraft for the air force.

“We continue to talk to the United States Air Force, the Air National Guard and the Marine Corps, to figure out what it might take to bring just a slightly modified rotary wing variant to those fixed wing platforms – and get it fielded urgently because there are [suitable] platforms that are in the fight today,” Dave Harrold, product line director for APKWS at BAE Systems, tells Flightglobal.

Under US Central Command-funded testing, the USAF’s Fairchild Republic A-10 Thunderbolt and Lockheed Martin F-16, as well as USMC’s Boeing AV-8B Harrier II, have already been tested with APKWS modified for fixed-wing aircraft. This demonstrates that it can be done, Harrold says.

“We continue to push forward with that, because we definitely believe that the F-16 would benefit from this, not just in the United States, but in international fleets. And in particular in the current fight, the A-10 could utilise this weapon very effectively.” 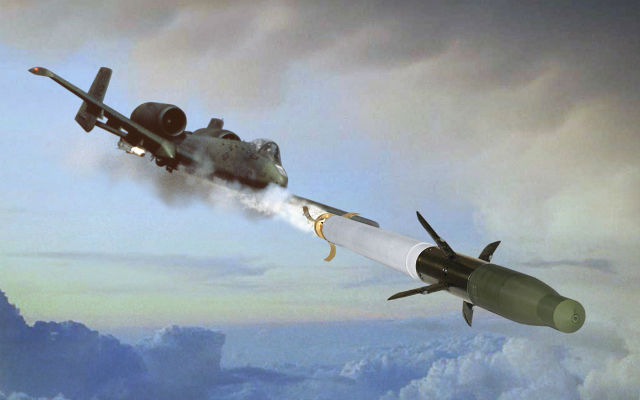 The APKWS would offer a lower-cost weapon that is suited to neutralising the targets the US-led coalition is tackling in Iraq and Syria under its Operation Inherent Resolve, Harrold says.

“It is a shame that it is not there today, because when we’re worried about the rising cost of the effort – particularly as it applies to the cost of the weapons systems that we’re deploying and the targets being engaged – APKWS is an extremely appropriate system and would be very highly effective in the current engagement,” Harrold adds.

The Lockheed Martin AGM-114 Hellfire missile is being used by manned and unmanned aircraft in Iraq and Syria. Harrold says this is too costly and has an unnecessary level of lethality for the mission at hand.

“When I look at those things, I think APKWS – at a third of the cost of a Hellfire and much more ideally suited for soft and lightly armoured targets than a much larger weapon system – is something that needs to get into the inventory and into that fight right away.”

In December last year BAE received a $45 million contract from the US Navy for the fourth full rate production order for 1,601 APKWS for the USMC.

The funds come from both the FY2015 procurement ammunition budget and the DoD’s overseas contingency operations funds, with the contract to be completed by September 2016.

BAE also hopes to receive a contract from the US Army at some point in 2015 for initial use of the AWPKS on its Boeing AH-64 Apache helicopters.

“We are very close with the army, and the army is working very closely with the US Navy to ensure the right level of inventory and the right ability to purchase APKWS,” Harrold says.

“I anticipate seeing APKWS fielded initially on some US Army Apaches certainly in 2015, and hopefully within the first half of 2015.”