Boeing has committed to the long-awaited launch of the 737-700ER (extended range) version based on the Boeing Business Jet (BBJ), following the decision of All Nippon Airways to convert two aircraft from its original 2003 order for 45 -700s.

Boeing is scheduled to deliver the first aircraft, formerly designated the -700X, in the first quarter of 2007. As with the BBJ, the -700ER will combine the -800 based wings, optional blended winglets, engines and landing gear with the standard fuselage of the -700. Below the main deck it will house up to nine auxiliary tanks, giving it a maximum fuel capacity of 40,580 litres (10,710 USgal) and a maximum range of 10,200km (5,510nm).

This is almost double the range of the baseline -700, and makes it easily the longest range 737 variant ever offered. 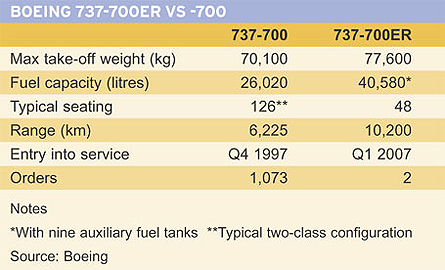 “This special aircraft will bring new possibilities for ANA in terms of the routes we fly,” said ANA president and chief executive Mineo Yamamoto. “It will allow us to explore destinations that could hitherto only be reached with larger aircraft.”

Boeing first mooted the 737-700X in the late 1990s and the model was widely expected to become the next variant to follow the stretched -900 development after 2000.

However, airline uncertainty and the delayed maturity of the point-to-point market in the wake of 9/11 rejigged the launch order, with the result that the -900ER was announced earlier. The -700X, configured for around 60 passengers and four auxiliary tanks, was earlier considered by UK carrier BMI as recently as 2004.

In parallel with the 737-700X, Boeing has studied an “800ERX” which would be equipped with up to six 1,900 litre auxiliary tanks, and would have a range with 64 passengers in excess of 9,000km. The curent status of this project is unclear.