Scout helicopters have a torturous legacy in the US Army acquisition system. Three attempts to buy a light observation helicopter - the Hughes OH-6 Cayuse in 1967, the Sikorsky/Boeing RAH-66 Comanche in 2004 and finally the Bell Helicopter ARH-70 Arapaho in 2008 - have failed, with billions of dollars wasted in the process.

The Bell OH-58 Kiowa is the only aircraft to survive the gauntlet. In the 37-year interval between the cancellations of the Cayuse and Comanche, the army fielded four major versions of the basic aircraft Bell derived from the commercial 206 JetRanger.

But the army's acquisition breakdowns - and aborted experiments with high-speed rotorcraft such as tiltrotors in the 1980s and the Lockheed AH-56 Cheyenne in the early 1970s - left the family of OH-58 models a mixed inheritance.

On one hand, the OH-58A owes its existence to the inability of Hughes to meet contractual production demands, which forced the cancellation of the OH-6 two years after contract award in May 1965. On the other, the army's spending on Comanche and Arapaho - totalling more than $8 billion over two decades - squeezed resources that could have been spent to prepare and sustain the OH-58D to be the army's workhorse helicopter in two wars since 2001.

As a result, an aircraft that was intended to be retired twice over must now be sustained through at least 2025 - the army's latest retirement date set for the OH-58D Kiowa Warrior.

The precise schedule is still being determined. With the analysis of alternatives study for the armed scout helicopter due in the first quarter of next year, the army is laying the groundwork for its third attempt to replace the OH-58D with a new scout helicopter.

Never before has the OH-58D faced such a broad field of competitors. Military variants of civil helicopters designed in Europe, including the EADS North America/Lockheed Martin AS645 and the AgustaWestland A119 Koala, are preparing bids. Even the modern descendant of the Cayuse - Boeing's OH-6S Phoenix - remains in competition, vying to reclaim the role it lost 43 years ago.

More ambitious options are also available. Sikorsky has demonstrated the X2 coaxial-rotor, compound demonstrator that can fly faster than 260kt (480km/h). In October, Sikorsky unveiled a military variant - the S-97 Raider - that could perform the armed scout mission with twice the speed of the OH-58D.

But it is still too early to tell if these pose a real threat to the OH-58D. Budget pressures on defence spending are growing and tolerance of acquisition risk is falling. With the Comanche, the army failed to successfully develop an all-new, advanced helicopter. With the Arapaho, an attempt to convert an existing helicopter into a military aircraft also flopped. The only option to work in 45 years has been to preserve and upgrade the OH-58. The OH-58D Kiowa Warrior is the army's scout helicopter by default, and may remain so.

The scout helicopter mission has evolved more in the last 40 years than perhaps any other manned aircraft operated by the US Army. The OH-58A of the Vietnam War was unarmed and weighed 1,451kg (3,200lb) fully loaded. Its primary role was to identify targets for the Bell AH-1 Cobra attack helicopter, and it could also carry a small amount of cargo or two passengers.

By the early 1980s, a scout helicopter with more performance than the OH-58Awas needed. The army was fielding the M712 Copperhead, introducing a precision-guided, 155mm (6in) artillery round for the first time.

It would no longer be enough to rely on the eyes of the OH-58A crew. The future scout helicopter would need a sophisticated sensor that could pass precise co-ordinates of the target's location. To keep the helicopter survivable in an engagement with Soviet units, the sensor would be mounted on top of the rotor hub, which in theory allows the airframe to remain partially concealed.

Normally, a new requirement would launch an acquisition programme that would seek competitive bids. The US Congress, however, blocked the army from launching a competitive replacement programme for the OH-58A.

"They did allow us to do an engineering change to the airplane and that was the OH-58D," says Col Robert Grisby, programme manager for armed scout helicopters. "We took OH-58 'Alphas', stripped them down to about five structural members on the aircraft. At that point of time, the aircraft was only 20 years old or roughly right around there, and then built up an OH-58D."

The so-called army helicopter improvement programme (AHIP) was described as a modification programme, but it yielded a nearly all-new helicopter. The slightly longer and taller OH-58D Kiowa was designed to carry a maximum load of 2,495kg, or 72% more than the original version. To lift the extra load, Rolls-Royce doubled the power of the Model 250 engine, replacing the 317shp (235kW) C18 version with the 650shp C30/R1.

The extra power would be needed for more than extra lift capacity. The army issued the request for proposals for AHIP in late-1980, shortly after the Soviet Union invaded Afghanistan. Perhaps mindful of the Afghanistan terrain, the army's RFP specified OH-58D must be capable of hovering out of ground effect as high as 4,000ft (1,220m) on a 35ºC (95ºF) day.

The rotor system also was redesigned to accommodate the higher power and weight levels of the OH-58D. Bell replaced a flapping, two-bladed rotor on the OH-58A with a four-bladed rigid rotor.

The Kiowa system is not often credited as a trailblazer, but the D-model introduced at least two firsts in army aviation. With weight savings a top priority, the OH-58D was the first aircraft to incorporate an all-composite main rotor hub in the army inventory. It was also the first army helicopter fielded with a 1553 databus, allowing the sensor to pass target data to precision-guided weapon.

The DRS Technologies mast-mounted sight was integrated on top of the rotor, providing the OH-58D with a thermal imaging system and a laser designator to support the laser-guided Copperhead artillery round.

With the mast-mounted sight and the digital databus, the OH-58D now had the embedded infrastructure to become more than a scout helicopter. However, in the early 1980s, the army had not yet anticipated a need to transform the Kiowa into a mini-gunship.

But the AHIP programme did improve the OH-58D's defensive systems. No longer would the aircraft's self-defence rely on a 7.62mm mini-gun. To guard against an attack by fixed-wing aircraft in a Fulda Gap scenario, the AHIP programme funded the integration of Raytheon's Stinger air-to-air missile.

In a historical fluke, another failure of the OH-6 led to the full weaponisation of the OH-58D, transforming the Kiowa into the Kiowa Warrior. Few details are unclassified, but the army in 1988 replaced MH-6 Little Birds flown by the army's special operations group with OH-58Ds newly armed with air-to-ground weapons. The deployment was called Operation Prime Chance, with the helicopters based on barges in the Persian Gulf. They would be used to protect oil vessels from attacks by Iran.

The success of that experience spurred the army to launch a new modernisation programme, with 411 armed OH-58D Kiowa Warriors delivered within the decade after 1991. In addition to the Stinger anti-air system, the Kiowa Warrior received three new attack weapons. The army integrated a .50-cal ibre machine gun with a 500-round magazine, a seven-shot pod loaded with 70mm Hydra rockets and a two-round launcher for 49kg AGM-114 Hellfire missiles. The last major evolution of the OH-58 airframe produced a mini-gunship in the mould of the more-heavily armoured Boeing AH-64 Apache.

Although not the "battlefield quarterback" envisioned with the RAH-66 Comanche, the armed Kiowa Warrior would prove an indispensible asset during the occupation of Iraq after 2003. It is the most heavily used aircraft in the army inventory despite not performing either of its original roles as a target spotter for artillery and the Cobra/Apache gunships.

Instead, army ground commanders have found a wide variety of new uses for the flexible scout helicopter.

"Given the current fight in Iraq and Afghanistan the aircraft is used for some scout missions. But it's also used as a light attack aircraft. It's used to intervene on short notice. It's used for convoy escort. It's used to detect [improvised explosive devices]," says Lt Col Courtney Cote, programme manager for armed aerial scout.

Although the army's focus had been diverted to the Comanche and Arapaho acquisition failures, some upgrades for the OH-58D were pushed through the system since 2003.

But the SEP would not be enough to keep the OH-58D viable after the cancellation of the ARH-70 in 2008. The army extended the retirement date of the OH-58D eight years to 2025 and reinvested the ARH-70s development funding into the OH-58D.

With the new infusion of cash, the army has launched the second major modernisation. The result will be the OH-58F "Fox" model, which largely bypasses lift improvements and focuses on upgrading sensors and avionics.

The most visible change in the new configuration is the removal of the mast-mounted sight. The army instead plans to install the Raytheon common sensor payload in the nose.

The repositioning of the aircraft's sensor, however, will have a dramatic impact on the interior structure well beyond the nose area.

"That mass that sits above the rotor system provided a lot of vibrational dampening to the aircraft, so that we didn't have many vibrations backed into the airframe. So when that was removed we had to make a requisite change in structural that holds the transmission to the rest of the aircraft," Cote says.

Placing the sensor in the nose also will require other changes in the aircraft structure, including the landing gear. "We've asked Bell to look at the landing gear and propose different ways we could get the nose of the aircraft a little further off the ground so we have a little bit of clearance for normal operations."

"Many more systems are controlled from those MFDs than ever before," Cote says. "We'll have dual independent moving maps similar to what you would see in a CH-47F, UH-60M or a Longbow Apache - just catching up with that."

The goal is to remain weight-neutral or slightly decrease the weight of the aircraft. As a result, a thrust improvement is not currently funded, despite the army's interest in aircraft that can hover out of ground effect at 6,000ft on a 35ºC day. But the army is upgrading the single-channel FADEC currently installed on the Model 250 C30R3 engines.

"It's a dual, digital engine control system that Rolls-Royce is partnering with us on," Cote says. "Essentially it will be almost a triple-channel FADEC system because it has two completely advanced digital channels backed up by a third channel that has very good capability."

The US military expects an increase in weight over time as new requirements and capabilities emerge. With the OH-58D already approaching weight-driven lift limits, an engine upgrade must be considered if the aircraft is to remain in service through 2025. R-R has shown proposals to increase engine power between 5% and 12%, or 30-75shp, Cote says.

Another option that may emerge is a more radical approach. Bell and Honeywell have teamed up to install and demonstrate a 900shp HTS900-2 in the OH-58D, which would increase thrust by about 50%. 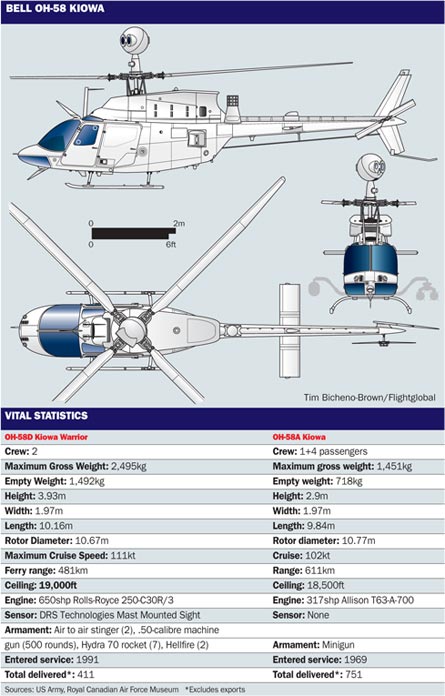