A McDonnell Douglas DC-9-10 seized earlier this month by Mexican customs officials is the flying demonstrator aircraft of troubled in-flight entertainment company SkyWay Communications it has been revealed.

The twin-jet (N900SA) was found to contain around 5.5t of cocaine and en route from Venezuelan capital Caracas when it was impounded on 11 April in Ciudad del Carmen, 880km (530miles) east of Mexico City.

The Mexican customs office (part of the army) has confirmed that the aircraft flew from Caracas with two pilots and a cargo of 100 suitcases, each filled with 50kg (110lb) of cocaine, worth over $100 million. Mexican defence ministry official Gen Carlos Gaytan says an empty Dassault Falcon 50 with flight plans filed for Toluca, was waiting to offload the aircraft's cargo. Toluca is a well-known staging post for illegal drugs entering the USA by road.

The aircraft belonged to Royal Sons, a charter operator based in Clearwater, Florida, which is owned in turn by SkyWay and local boat charter firm Royal Sons Motor Yacht Sales. The aircraft had been purchased to act as the demonstrator for SkyWay's planned airborne highspeed broadband telephone network. SkyWay Communications filed for Chapter 11 bankruptcy protection in June last year and the company and its two top managers are being sued by shareholders for allegedly misleading investors.
However, SkyWay's website says venture capitalists have been found to secure the future of the project. 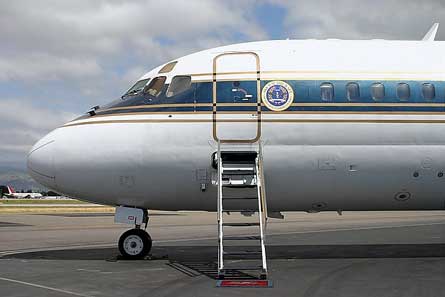 The aircraft was painted in a quasi-governmental transport livery for the flights, which originated in Clearwater on 5 April before flying non-stop to Caracas. A crest on the side, which resembles that of the US Department of Homeland Security, reads: "Sky Way Aircraft - Protection of America's Skies" and the aircraft has a gold-bordered blue stripe along the side similar to US government aircraft.

Soldiers arrested the Colombian co-pilot and the two Mexican pilots of the Falcon, but the DC-9's pilot escaped, fuelling conspiracy theories.