Raytheon UK has been awarded a £25 million ($38.5 million) contract to complete the development and qualification of a new warhead to equip the Paveway IV precision-guided bomb, for carriage by the Royal Air Force’s Eurofighter Typhoons.

To replace the penetrating weapons capability currently provided using the larger Paveway III from the RAF’s Panavia Tornado GR4s, the new system will enter service with the Typhoon in the first quarter of 2019. This timetable coincides with the GR4’s planned retirement from service.

“The warhead will be interchangeable with the existing [Paveway IV] weapon configuration, optimising the Ministry of Defence’s current stock holdings and ensuring aircraft integration costs are minimised,” Raytheon says. The latter activity will be conducted under a separate award with UK Eurofighter partner company BAE Systems, and will include studying the use of a new dual-round launcher for the weapon. 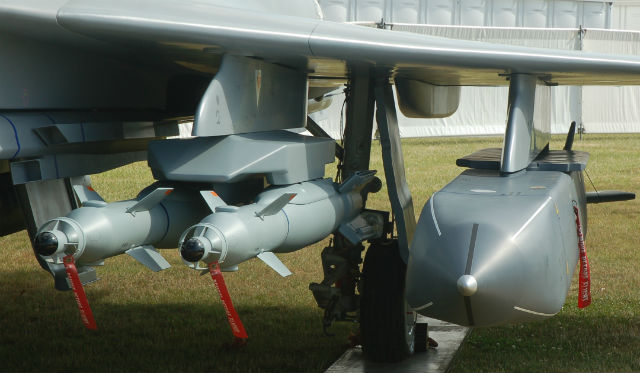 John Michel, weapons business director for Raytheon UK, says the new tactical penetrator warhead will be similar in performance to the BLU-109 used with the Tornado’s current weapon, despite the 226kg (500lb) Paveway IV being a quarter of its weight.

Qinetiq has supported the design and qualification of the new warhead, and sled tests have already been performed against representative targets. It will be produced by Rheinmetall Italia, while other parts of the Paveway IV – including its Thales-produced Aurora fuse – will remain unchanged.

The award for the new warhead – which also covers initial production activities – is just one part of the MoD’s Selective Precision Effects at Range (SPEAR) Capability 1 plan for the Paveway IV. Later elements will include the use of an enhanced seeker, which will be capable of engaging faster-moving ground targets, Michel says.

Raytheon also expects the new version of the Paveway IV to be integrated with the Lockheed Martin F-35B, and says it could also be carried by the RAF’s General Atomics Aeronautical Systems Reapers, if a requirement is forthcoming from the Ministry of Defence.

Michel is also looking towards potential export opportunities with the tactical penetrator, noting: “People who are looking at the Typhoon always ask us about the Paveway IV.”