The Alenia/ATK team will deliver the first of the six aircraft in the second quarter of 2014. The order also includes three modification kits, allowing the air force to use at least half the fleet in their original role as transports.

“This one has been a dream from an operational point of view,” says Lt Gen Pasquale Preziosa, chief of staff of the Italian air force.

The Italian air force operates 12 C-27Js, including some already modified with the jamming and electronic defence instrumentation (JEDI) system to counter improvised explosive devices in Afghanistan. 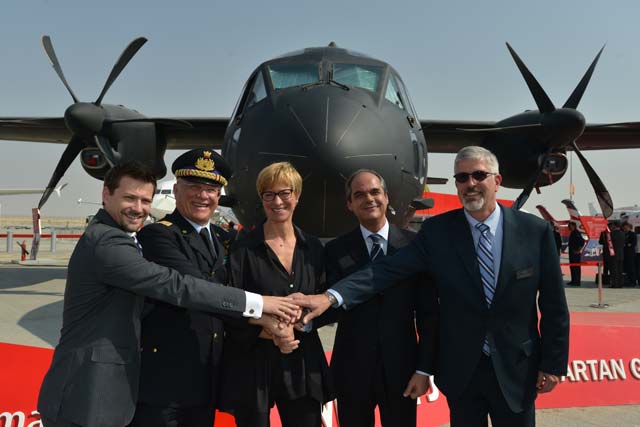 The Italian air force plans to deploy the aircraft to Afghanistan in June to support ground troops, Preziosa says. The MC-27J can provide information to Italian special forces on the ground, as well as attack insurgents or threats.

The Italians plan to upgrade the aircraft with other capabilities, including precision guided weapons, Preziosa says.

“I think this is just the basic” configuration, he adds.Alenia and ATK now have a launch customer for the armed C-27 Spartan, and plan to pursue sales
to other countries, including the USA and Middle Eastern countries.

Alenia chief executive Giuseppe Giordo notes that the USA barred export of the MC-130 gunships operated by the US Special Operations Command.

“We believe this will enhance the market opportunities of the C-27J,” he says.