Completing a so-called P1E package of enhancements “is a significant step forward,” says Laurie Hilditch, Eurofighter’s head of future capabilities. “It takes us to a position where it is a true swing-role aeroplane, with a fully integrated laser-designator pod and new weapons.”

“That really puts to bed any claim that the Typhoon is not a multi-role aeroplane,” Hilditch says. “It does both [air-to-air and air-to-surface], with equal capability, and at the same time. Typhoon is seriously maturing,” he adds. 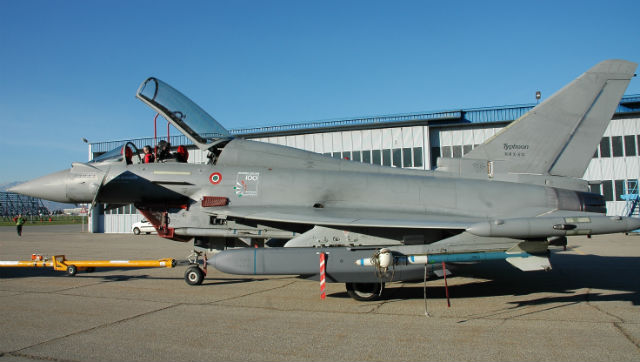 Another system that will strongly underline the Eurofighter’s longer-term strike potential is MBDA’s Storm Shadow cruise missile, which is poised to get airborne with instrumented production aircraft (IPA) 2 from Decimomannu air base in Sardinia, Italy. Plans to fly the combination this week have been thwarted so far by a cyclone, but the event is described as to occur “imminently”.

“A major goal of the tests is to assess the Storm Shadow in flight and to achieve clearance for the full integration on the Eurofighter Typhoon by 2015,” the company says. This process will also be supported by using the German/Swedish-developed Taurus cruise missile, which will be flown with IPA 7 from Cassidian’s Manching site in Germany from December. To support the wider Storm Shadow integration effort, the work with Taurus will also give Eurofighter a head start should a future customer request the weapon for its aircraft.

In another key advance for the Typhoon, Hilditch says good progress is being made towards incorporating an active electronically scanned array radar with the type. “We hope to have details frozen by the end of this year, and it is a clear target for ourselves and the core customers that we will be signing the contract between us in the middle of next year,” he says.

Eurofighter chief executive Alberto Gutierrez was a no-show at the 20 November press conference, with his absence attributed to “a few business calls”. Company officials declined to comment on the current status of government-to-government discussions between the UK and the United Arab Emirates over a potential Typhoon order.