The United Arab Emirates’ procurement of the unarmed Predator XP is helping General Atomics Aeronautical Systems stand up a new business model for exporting unmanned air vehicles to nations outside of NATO.

Until 2011, General Atomics was restricted from offering Predator-class aircraft to those outside of the alliance, and the company has spent many years navigating the stringent US regulatory environment that has stymied sales in the past.

Through this direct commercial sale, blessed by the US state department, General Atomics has created a template for future business pursuits. It also has a launch customer for its newest product, the Predator XP, and can start ironing out training procedures and operational protocols.

Jim Thomson, General Atomics regional director of strategic development, says that the UAE air force is establishing “one system” initially – which typically consists of three or four aircraft and two Block 30 ground control stations. The set-up allows the UAE to maintain one 24/7 combat air patrol anywhere within its satellite area. 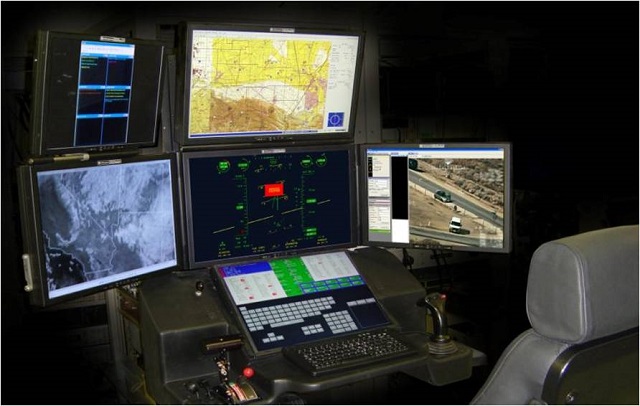 UAE is being equipped with the Block 30 “Storm” ground control station, and could eventually upgrade to a version of the Block 50 “Advanced Cockpit” that’s under development.

He says that despite burdensome export rules, the UAE chose the Predator XP because of its sophistication in target tracking, classification and intelligence processing, dissemination and exploitation (PED). Other competitors offered armed UAVs that were cheaper, he says, and some even proposed building the system locally, but the Predator’s 25-year legacy set it apart.

“UAE has all the choices in the world,” Thomson explains. “It’s not just what it looks like sitting on the tarmac. It’s how it performs. Its training and PED.”

With an endurance of 35h, the Predator XP can patrol over land and sea, using its high-resolution Lynx synthetic aperture radar and electro-optical/infrared sensor turret together to automatically detect, identify and track targets.

Thomson declines to confirm if the UAE’s Predator XP comes equipped with a laser designator and laser range finder, noting that those capabilities are approved or denied on a country-by-country basis.

If equipped, the Predator XP could illuminate targets for UAE’s Lockheed Martin Block 60 F-16s for precision strikes on targets from outside of audible range. That process known as dynamic targeting has long been used by US forces in Iraq and Afghanistan, and now Syria.

“Certainly, when you have 35h of endurance, the time on station gives you time to identify your target and not make any rash decisions on whether you’re going to take action on that target,” says Thomson. “Even though it’s not weaponised, it enables the weapons chain for the country to make smart decisions before they take action.”

He says designating targets using a UAV keeps combat jets at a safe distance from the area and reduces pressure on the pilot to make a snap judgement about whether to release a weapon.