Emirates is stepping up pressure on Boeing to firm up plans to build a larger, 300-seat derivative of the 787 to replace the 777-200ER.

The Dubai-based carrier has been evaluating the 787 along with the A350 with a view to placing a large order, but has repeatedly stated that the current Boeing offering is too small for its needs. The manufacturer has until recently baulked at requests to create a larger 787 derivative, beyond the 260-seat -9, because it would compete with its own 300-seat 777-200ER.

“We’ve told Boeing what Emirates would like, to see what they could do with a 787 stretch and they’ve responded positively,” says airline president Tim Clark. “Now they’ve brought something of interest to us…I don’t know where that will take us,” he says, adding: “They’re working with us and, I dare say, a lot of the others.” 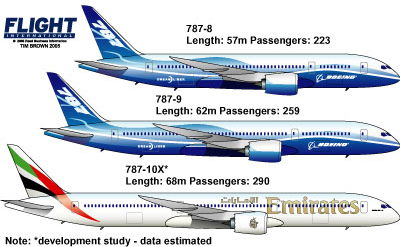 Despite his pessimism about the 777-200ER, Clark says that Emirates is “seriously looking at” the ultra-long-range General Electric GE90-powered -200LR version, which has “unbeatable range and performance”. This aircraft and the incumbent A340-500 are being evaluated as the airline looks to expand its ultra-long-range fleet.

Boeing says: “We are studying larger versions of the 787, but no decisions have been made. We are working with the market to determine the best family solution.”