The US Air Force is poised to deliver the decision of the decade, with reports that the Long-Range Strike Bomber contract award could be announced as early as 27 October. Two key steps must take place, and Bloomberg reports that the first has already taken place.

Frank Kendall, the Pentagon’s chief weapons buyer, convened a meeting on 23 October to decide whether LRS-B should advance to the development phase after several years of classified analysis, prototyping and technological risk-reduction.

Once the air force has a signed “Milestone B acquisition decision memorandum” in hand, the service can move quickly to award the multibillion-dollar development contract, choosing either a Boeing/Lockheed Martin team or Northrop Grumman. That contract will include three or four test aircraft plus options for the first 21 production examples.

Mark Gunzinger, of the Center for Strategic and Budgetary Assessments says the two competing offers appear to be at a higher level of maturity than any other programme he has seen, but questions about who might win or what the winning design more look like are highly speculative.

He says delays in awarding the contract are not related to the budget and defence authorisation battles being fought with Congress, and any change in top-line funding are purely about programmatics and the timing for when the money must be spent.

Gunzinger expects the aircraft will be deigned with all-aspect stealth characteristics to prevent tracking by X-band radars and infrared sensors, and will have very strong aircraft self-protection systems through a combination of active and passive jammers, electronic warfare devices, lasers as well as an “exquisite” knowledge of where enemy threats are located. The aircraft will likely be designed with long-range Russian and Chinese anti-aircraft systems in mind, such as the S-400, S-500 and HQ-9, he says.

Other Washington aerospace analysts were willing to roll the dice over a likely winner. The contract is the biggest deal since the Joint Strike Fighter award to Lockheed 14 years ago on 26 October 2001, and there are compelling reasons for the decision to go either way.

Some say Northrop lost the competition long ago when it decided not to team with Lockheed, thereby creating a formidable opposition with deep pockets and technical know-how. The two teams’ bomber offerings are classified, but the most relevant experience in the competition – the B-2A stealth bomber – still favours Northrop, however.

Northrop released this new air-to-air footage of the B-2 on 23 October, perhaps in a last-ditch effort to gather support.

Wayne Plucker, a Frost & Sullivan analyst, who has operated the B-1 and B-52 and helped prepare B-2 pilots for the nuclear mission, expects a Northrop win for industrial base reasons, since choosing Boeing/Lockheed could end the company as a major hardware manufacturer.

“There appears to be a concerted effort to spread the wealth, and certainly Lockheed has gotten more of its fair share of the wealth than anyone else recently, and Boeing has strategically annoyed the air force on several occasions in recent years starting with [the Darleen Druyun corruption scandal] and going through the tanker fight, and of course the [KC-46] is an existing programme that will hold them up in part,” he says.

Plucker believes both sides probably have access to the same technology, and both designs have been matured to the preliminary design review stage. He says the Northrop B-2 was at the technological “bleeding edge” when it was developed in the 1980s and the company would have the upper hand in developing an advanced, optionally piloted derivative.

Loren Thompson of Lexington Institute thinks Boeing/Lockheed will win, saying a Northrop victory would be a “stunning upset” against a much better financially endowed team.

“The moment it became Northrop versus Boing/Lockheed, it was nearly inevitable that Northrop would be underbid,” Thompson explains. “Boeing and Lockheed collectively have five times the revenue of Northrop, and it’s quite possible that in the end the key discriminator in this competition will be affordability.”

Thompson says cost has been a key performance perimeter since LRS-B started in 2011, and Boeing and Lockheed are believed to have aggressively tried to underbid Northrop. In fact, he thinks Northrop could already be preparing the market for an LRS-B loss after announcing Gloria Flach as chief operating officer and possible successor to chief executive Wes Bush over bomber point-man Tom Vice, who continues to head Northrop’s Aerospace Systems sector. 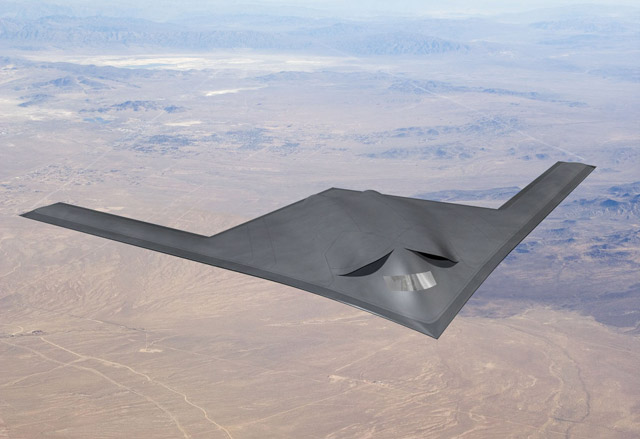 Richard Aboulafia of Teal Group thinks it could go either way, but Boeing/Lockheed can’t simply buy their way into the programme. It’s an unhappy circumstance for the Pentagon either way, he says, since the Defense Department faces losing a combat aircraft manufacturer (Boeing in St Louis, Missouri) or a stealth combat aircraft designer (Northrop in Melbourne, Florida and Palmdale, California). He thinks if Northrop loses, its relatively independent business units might be “auctioned off in pieces” to unlock its value and there is little the Pentagon can do to stop it.

“They are worth less as a whole than the sum of their parts,” he says.

Rebecca Grant, of IRIS Research, disagrees, saying Northrop remains a “very viable company” either way through its MQ-4C, F-35 and F/A-18 work, and will probably live on.

She says the bomber programme has already done great things for the aerospace industry by keeping two capable teams together and working on cutting-edge technology after the last bomber programme was aborted in 2010.