Gradually diminishing parking space probably wasn’t on the Airbus watchlist of potential hitches that the airframer might encounter at the early stage of entry-into-service for the re-engined A320neo.

But technical snags centred on the Pratt & Whitney PW1100G geared turbofan had, by June, resulted in the airframer having to store some 25 engineless aircraft across its production sites as it awaited a resolution to the powerplant manufacturer’s problems.

Airbus is hoping that the stuttering start to A320neo production, following a relatively smooth development process, will be overcome this summer in time to put its ramp-up and delivery schedule back on track in the second half of the year.

“We’ve been building gliders,” acknowledged chief operating officer Tom Williams to an aerospace media audience in Hamburg towards the end of May – a jocular comment which nonetheless underscored that the issue wasn’t an Airbus one. He pointed out that the aircraft were structurally assembled and painted, adding: “They just need engines to make them work.”

Airbus had known from the outset that the largest risk attached to the A320neo programme lay in the newly developed powerplants at its heart.

But while specific technical matters held up the test schedule for the PW1100G-powered aircraft, pushing certification into November 2015, Airbus’s largest headache emerged, ironically, just as the jet was cleared for entry into service.

Launch customer Qatar Airways, hardly the most forgiving of clients, publicly concentrated its fire on Pratt & Whitney as the fourth-quarter delivery target slipped away, and the carrier eventually snubbed the opportunity to take the first aircraft.

Although Lufthansa picked up the slot, the subsequent initial A320neo delivery, on 20 January, was an uncharacteristically low-key handover – even for an aircraft which, Airbus has emphasised, shares 95% commonality with the 7,000 previously-delivered A320-family jets.

This commonality, along with the high rates of production on the A320 line, have left Airbus will little manoeuvring space – both in terms of physical manufacture and its relationship with customers accustomed to the type’s high levels of maturity.

A320 programme manager Klaus Roewe, who previously oversaw development of the re-engined jet, admitted during the Hamburg briefing to having “some sleepless nights” as the airframer sought to overcome “teething issues” including the need for a prolonged start-up on PW1100G-powered jets.

“The engine start-time was longer than on the [regular A320],” says Roewe.

This had been traced to a rotor-bow problem, a thermal phenomenon in which temperature variations along the turbine shaft, during heating and cooling of the engine, leading to misalignment of the powerplant’s precisely positioned components – and to wear and vibration.

Airbus had resorted to a cranking procedure to ensure tip clearance in the engine and avoid component rubbing. 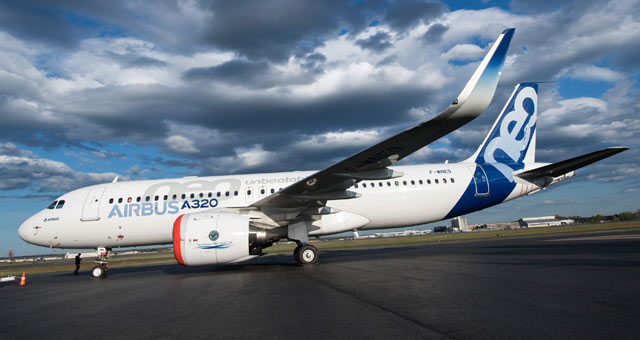 “Everything is easily retrofittable, and there are retrofit plans agreed with customers,” he adds.

Roewe notes that a separate “headache” had emerged with the full-authority digital engine control (FADEC) which centred on the generation of failure messages within the cockpit. He says pilots had trouble distinguishing genuine from spurious messages – and therefore had to treat each as real – until a new software version could be uploaded.

But Roewe is confident that the FADEC issue has been overcome with the completion of the software installation: “The problem is behind us,” he says.

He also revealed that Airbus had been working to deal with a temperature matter – belatedly uncovered during flight-testing – which affected the A320neo’s hydraulic system, and threatened to restrict the type’s operation in hot climates.

He says the issue, related to higher engine temperatures, led Airbus initially to limit the aircraft to an ambient temperature of 50C.

But the airframer’s efforts have enabled it to hike the temperature limit to 55C. Roewe says this should be sufficient for the aircraft to cope easily with any Middle Eastern environment, with “no overheat” of the hydraulic system.

The glitches have threatened to overshadow the aircraft’s capabilities, and Roewe is keen to emphasise the A320neo’s performance. “We’ve achieved each and every objective we were after,” he says, adding that Airbus has over-delivered in some areas. “There is no need for us to recover anything.”

He says the 15% fuel-burn saving has been verified, and that the jet is 150kg lighter than its target weight at launch. Roewe says the aircraft’s weight has been reduced despite the decision to sacrifice some weight savings to ease maintenance.

The A320neo’s noise-contour footprint at London Heathrow is 0.87km², he says, less than half the 1.8km² figure for its predecessor, and it meets the airport’s QC0.25 and QC0.5 thresholds for landing and take-off respectively.

Roewe even suggests that Airbus is having to “educate” air traffic control because the type has a shorter time to climb.

Despite A320neo deliveries languishing in single figures, Pratt & Whitney president Robert Leduc described the PW1100G’s entry into service as “phenomenal” in early June, robustly defending the powerplant in the face of customer sniping, notably from Qatar Airways, which had been threatening to ditch the engine in favour of the rival CFM International Leap-1A. Leduc cited a dispatch reliability of 99.75% on the seven aircraft in service – two with Lufthansa, four with IndiGo and one with GoAir – and dismissed some of the criticism as “grandstanding”.

The manufacturer believes it has overcome the problems, and that attention is focused on ramping up production to address the A320neo backlog, which had risen to more than 4,560 jets by the beginning of June.

While the development of the Leap-powered A320neo had been deliberately staggered against that of the PW1100G version, the modification programme has closed much of the gap, and certification at the end of May gives Airbus the opportunity to begin delivering the Leap-powered variant just as the new Pratt & Whitney engines start arriving. CFM says deliveries are “on schedule” for mid-2016.

Airbus has not confirmed how many A320neos – with either engine type – are likely to be handed over to customers this year. But it cautioned at the beginning of 2016 that it would not be delivering “hundreds” during the first half, and that production would be weighted towards the second half of the year.

The airframer had intended to avoid a dip in its A320 production rate during the transition to A320neo manufacture and, in addition to manufacturing the engineless jets, it managed to deliver 192 single-aisle aircraft over the first five months of the year, including the first seven A320neos. This delivery figure was just four airframes down on the 196 achieved over the same period in 2015.

Airbus is hiking monthly A320 production rates to 46 this year, to take a larger slice out of the backlog, part of the gradual process of ramping the rate to 60 in mid-2019.

It has opted to take advantage of infrastructure at Hamburg, originally intended to support A380 outfitting, to support the development of a fourth A320 assembly line at the Finkenwerder site.

Airbus chief operating officer Tom Williams adds that the creation of an A320neo cabin-fitting zone at Toulouse will allow the airframer to cut the number of ferry flights during production, generating “big productivity benefits” for the programme.

Certification efforts for the largest member of the family, the A321neo, are still continuing, but could be complete by the end of this year. A321neos account for more than a quarter of all orders for the re-engined family.