The milestone will take place at Lockheed's Fort Worth site in Texas, where F-35B BK-1 flew for the first time on 13 April. Following its acceptance, the aircraft will be flown to Eglin Air Force Base in Florida, where it will join a US-led initial operational test and evaluation programme for the F-35.

A second UK aircraft has recently undergone preparations to conduct engine runs at Fort Worth, and will be flown soon. Its delivery is scheduled for two or three months after BK-1, according to Steve O'Bryan, Lockheed's vice-president F-35 programme integration and business development. A third STOVL jet will be produced for the UK during the programme's fourth lot of low-rate initial production (LRIP-4).

The F-35B will replace the BAE Systems Harrier GR7/9s previously flown by the Royal Air Force and Royal Navy, after the UK government dropped plans to switch to the carrier variant F-35C in May. A decision on how many aircraft to procure will be made as part of its next Strategic Defence and Security Review in 2015.

O'Bryan says testing of the F-35 remain ahead of Lockheed's planned schedule for 2012. By 30 June, aircraft in all three variants had made a combined 595 flights and achieved 4,800 programme test points: 34% and 14% ahead of target, respectively.

Partner nations Australia, Italy, the Netherlands, Norway, Turkey and the UK are all expected to approve orders for long-lead production items for LRIP-7, while Israel and Japan have both signed letters of offer and acceptance for F-35A purchases. "The facts show an international programme that's healthy and growing," O'Bryan told Flightglobal at the Royal International Air Tattoo at RAF Fairford, in Gloucestershire on 6 July.

With all current aircraft involved in flight testing, training or operational test activities in the USA, O'Bryan says a decision on when to deploy the F-35 for its first appearance at a European air show will be "a government call". 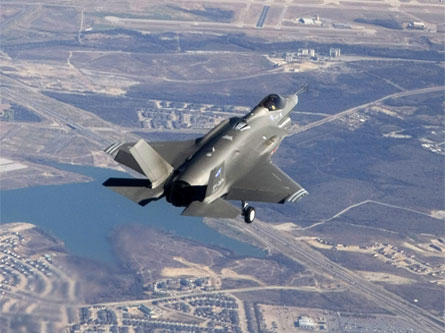