Eurofighter is wheeling out some heavy artillery for Farnborough, with the world premier on Tuesday of the new Captor-E active electronically scanned array (AESA) radar which it believes will power up its export sales campaign.

The AESA-equipped aircraft on display is a UK Royal Air Force Tranche 1 single-seater. IPA5 has been extensively modified at BAE Systems' site at Warton in Lancashire to carry Captor-E and performed its first "shakedown" flight last week. The AESA system generates more heat and uses more power than the mechanically-scanned Euroradar Captor-M which has been standard fit on Eurofighters up to now. 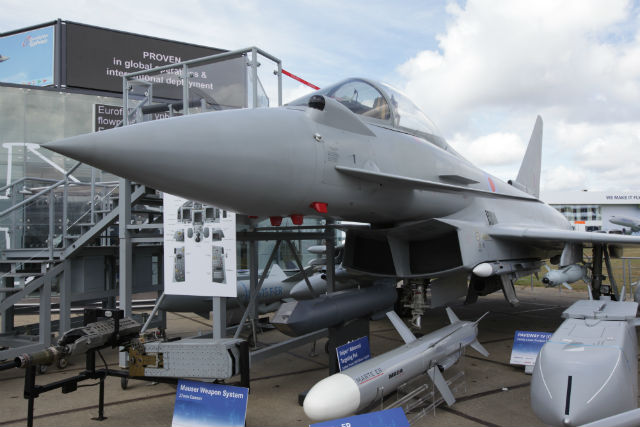 Tranche 3 aircraft now in production are equipped with the liquid cooling and beefed-up electrical supply needed to cope with the AESA system. The first customer aircraft to be fitted with Captor-E – a two-seat Tranche 3A instrumented production aircraft known as IPA8 – was pulled off the final assembly line at Airbus Defence & Space's Manching site near Munich late last month and will ultimately be delivered to the German air force.

Mechanically-scanned systems are well known and generally reliable, but AESA systems are increasingly a customer expectation. By ditching a swinging sensor head for an array of fixed-position transmit/receive modules, AESA offers greater redundancy, continuous rather than sweeping coverage and can give improved detection rates.

The IPA5 project opens the door for Eurofighter partner nation air forces to upgrade their fleets to the latest standard, or sell off some of their older aircraft.

The show comes after another big week for Eurofighter, in which the first Tranche 3 aircraft built by Italian partner Alenia Aermacchi made its first flight. Test pilot captain Mario Mutti said the aircraft – the 64th for the Italian air force – performed “very well” during its 1h sortie.

Laurie Hilditch, head of future capabilities at Eurofighter, says the modification kit should give the aircraft the sort of “knife-fight in a phone box” turning capability enjoyed by rivals such as Boeing’s F/A-18E/F or the Lockheed Martin F-16, without sacrificing the transonic and supersonic high-energy agility inherent to its delta wing-canard configuration.