Saab is continuing to make good progress with its Gripen E programme, with chief executive Hakan Buskhe revealing that it launched serial production of the fighter early this year.

Speaking during an annual results presentation on 15 February, Buskhe said the programme advance was made "in the first week of January". Saab is under contract to produce 60 examples of the new-generation type for the Swedish air force, and 36 E/F-model examples in partnership with Embraer for Brazil.

Following scheduled first deliveries to both customers before year-end, the Gripen E is expected to be available for use in Sweden from 2021, according to Stockholm's FMV defence materiel administration. Initial operational capability has previously been set for 2023. 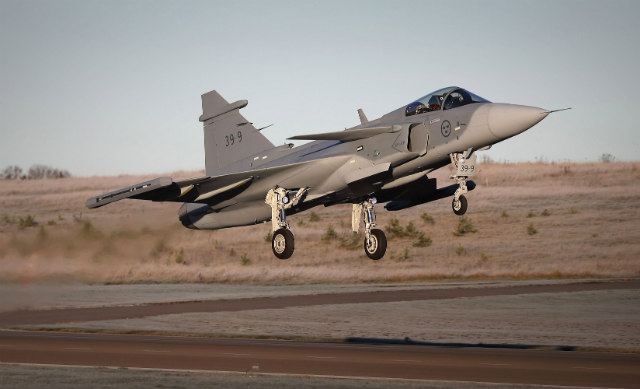 Meanwhile, Buskhe confirms: "We are in discussions on a next batch for Brazil," and suggests that the follow-on procurement could be advanced from around 2021 or 2022. The Swedish air force's commander also recently indicated his service's interest in potentially acquiring another 60 of the type, he notes.

Other export opportunities are also being eyed for the single-engined fighter. "We just turned in our proposal to Switzerland and Finland, and we are in discussion with Canada," Buskhe says. Saab is also looking at Croatia's requirements, he confirms, after the nation's planned acquisition of ex-Israeli air force Lockheed Martin F-16s collapsed recently.

Saab's proposal to Finland totals 64 Gripen E/Fs, while Switzerland is being offered either 30 or 40 single-seat examples. Procurement decisions by both nations are expected around 2021.

Responding to a question about the Swedish company's willingness to collaborate on future European combat aircraft programmes, Buskhe says it has so far seen no detail about a recently launched French/German project. However, he confirms that it has had "very fruitful discussions with the UK and partners" regarding the Tempest concept.