The US Air Force (USAF) has modified a Boeing B-1B Lancer to enable the bomber to carry larger and heavier weapons, including hypersonic missiles.

The service's 412th Test Wing at Edwards Air Force Base in California showcased a B-1B with the improve weapons capabilities to an undisclosed group of industry partners on 28 August, the USAF says.

The service has engineered two methods of increasing the aircraft's weapons capacity: an external carriage system and a lengthened bomb bay.

The changes would enable the aircraft either to carry larger weapons like hypersonic missiles, or more smaller munitions. 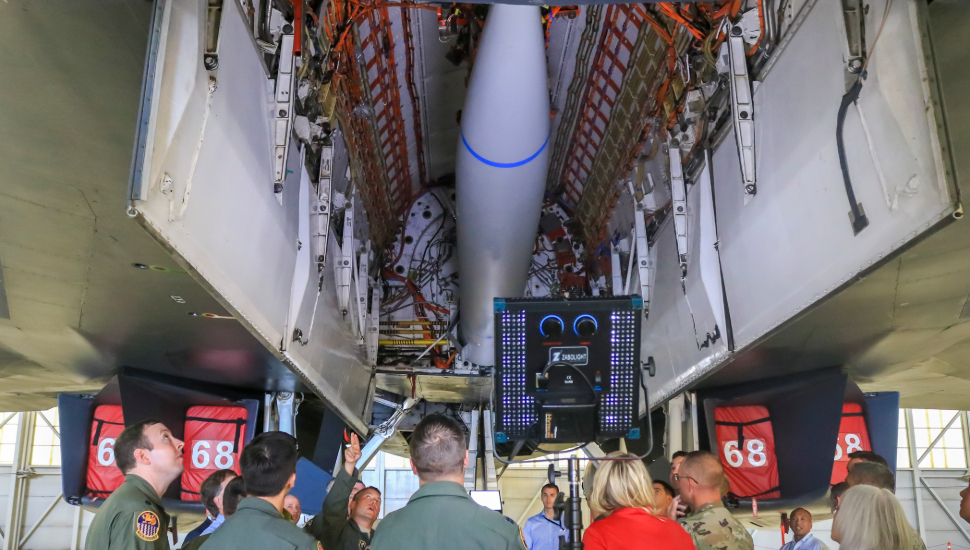 “The purpose of the demonstration was to show that we’re still able to move the bulkhead from the forward intermediate bay to the forward location.” says Lieutenant Colonel Dominic Ross, B-1B programme element monitor with the Air Force Global Strike Command.

“Additionally, we demonstrated that we can still carry weapons externally on six of the eight hard points, which increases our overall carriage capacity,” Ross adds.

The bomber will continue to only carry conventional weapons in order to remain within the bounds of the New Strategic Arms Reduction Treaty with Russia, he says.

“Currently we can carry 24 weapons internally. Now it can be increased to potentially 40, based on what type of pylon we would create,” Ross says. “This [also] gets the B-1 into the larger weapons, the 5,000 pounders. It gets it into the hypersonics game as well.”

The demonstration showed a hypersonic missile mock-up attached to a Conventional Rotary Launcher inside the B-1B’s bomb bay. That rotary launcher is the same type that has been used to increase the precision weapons capacity of the Boeing B-52H Stratofortress. Ross says he and fellow B-1B crewmembers came up with the idea and designs for modifying the bomber’s magazine capacity.

“It’s not a permanent modification, it’s something that can be done through a few work shifts with the maintenance (flight),” he says. “So depending on what the targets are that we’re going after, the weapons we need to carry, we can move that bulkhead and [add] the external carriage.”

“It would basically increase the weapons capacity to make the bomber more efficient, so that we’re able to strike more targets with the same aircraft,” Barksdale says. “It would allow us to more-efficiently plan for targeting and use fewer aircraft, with fewer aircrews in harm’s way, to strike the same number of targets. It would also decrease the support required, whether that’s tankers or other support assets.”